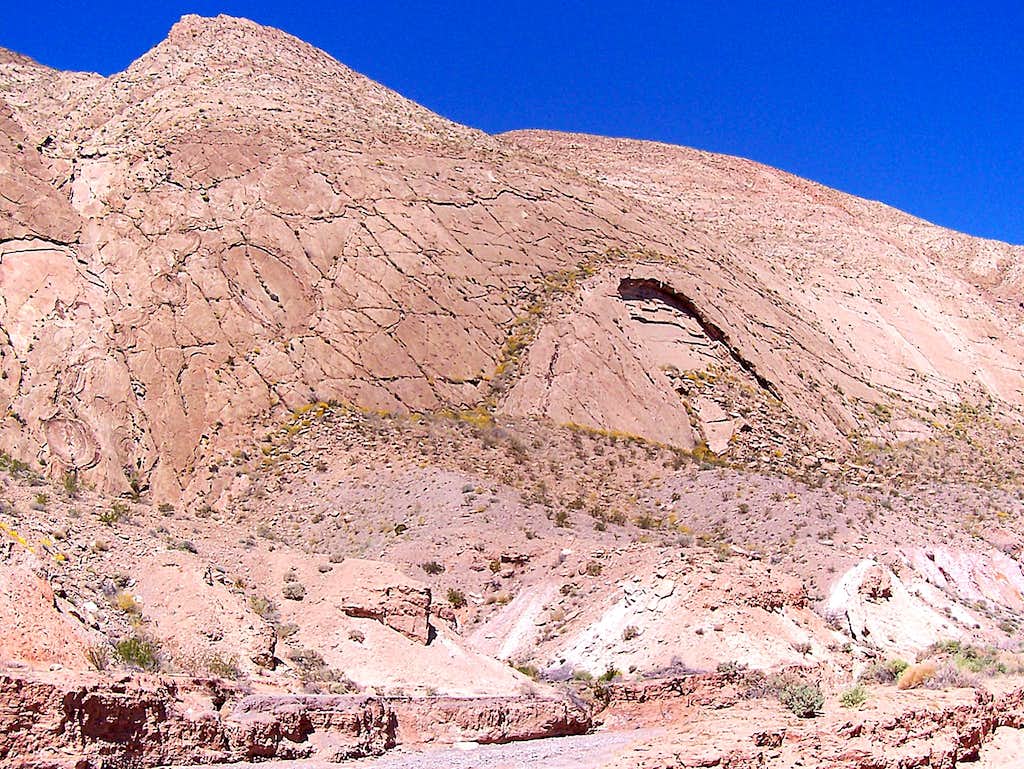 Although hundreds of miles inland, the geology of the Muddy Mountains region gives a telling glimpse into its geologic past. About 300 million years ago, this area was 2,500 feet of sediment at the bottom of a SHALLOW SEA. Today, this sea floor comprises the limestone peaks seen throughout this region. (Limestone is a very common sedimentary rock, formed from the remains of all kinds of animals.) Also scattered among these peaks are fossilized sand dunes that have eroded into "mind-bending" galleries and canyons. I was reading about particular types of caves. Almost 90% of the world's caves are limestone karst caves. It's true that all "limestone caves" are NOT karst caves, as "karst" only describes the mechanism of how the cave was formed. What we are looking at here is the possible formation of a limestone "karst" cave. A characteristic of limestone is that it's easily dissolved in rainwater. Rain falls through the atmosphere picking up carbon dioxide. It hits the Earth's surface and flows downward into cracks in rock formations, such as fissures and joints. More carbon dioxide is given off by the rotting plants and soluable lime in the rocks. This mixture forms a mild carbonic ACID, which gradually SEEPS into weakened rocks and dissolves calcium carbonite, the main MINERAL in limestone. So, are we looking at the beginnings of a new KARST CAVE in Southern Nevada?? Perhaps in a couple more thousand years, folks! I won't be here to enjoy it, as I will probably be ADDING to the content of carbon dioxide in the atmosphere. Hey, but YOU still might be here to enjoy a new cave in Southern Nevada! CHEERS!! Photo taken from Lovell Wash in s. NV, looking west towards North Las Vegas. (March 31, 2008)
« PREV NEXT »

seems like any time I watch a show on geology and the mountains they make a comment on how the area was at one time a shallow sea or under an ocean.

Hey, the caver and guitarist! How are you
doing? Yes, I guess at one time the Earth
had a lot more water. Had something to do
with all the glaciers melting. Not that
the same will happen again. If it does,
I unfortunately won't be around to see it!
I was just happy to wander around in the
desert, and stare at the rock formations,
with my mouth wide open!! - Larry of AZ