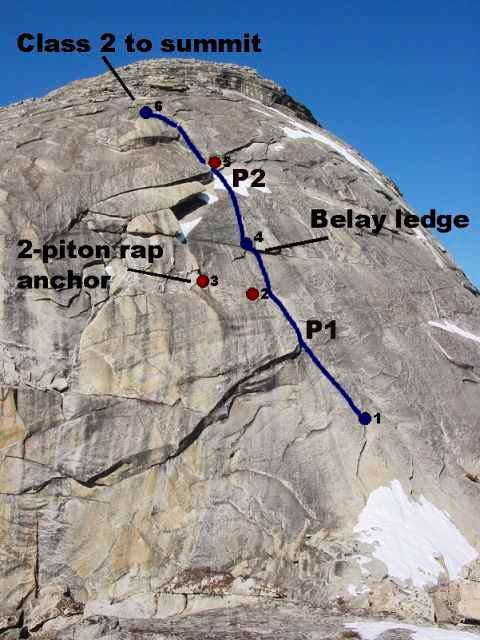 Rappel options on Starr King's SE Face. Most trip reports seem to use a combination of rappeling and downclimbing to descend the face, but it is possible to rap the roped portion in its entirety, as described below. Normal belay anchors and Bob's described route are shown in blue (anchors 1, 4, and 6); additional rappel anchors (existing slings) are shown in red (anchors 2, 3, and 5). Anchors 2, 4, and 5 are slung flakes (#5 is a bit dodgy--there's an established sling pinched securely between a flake and surrounding wall, with seemingly no way of rotating it, backed up by a questionable sling around the flake); anchor 3 is two equalized slings from two old pitons, and anchor 6 is the slabby rock outcropping found at the top of the roped climbing.

It isn't possible to rap the whole way from station 5 to station 2 or 3 with a 50-meter rope; a 10-foot class 4 downclimb is required at the end of the rappel to reach the next station. It's probably wiser to do the additional short rappel to the first belay ledge (5->4) instead.

Matthew, worthwhile information in this photo.

I think this puts the issue to rest! I was always confused when Bob would claim that one could rap without downclimbing with a 50m rope. We rapped (60m rope) from 6 to 5, then downclimbed to that overhang between 5 and 3. There was a ratty-looking set of slings there, which we rapped to 3 from. I don't think it was possible to rap from those slings to the bottom.

With a 5' total length extension on an excellent slung and enclosed horn approximately at rap station "6" (in good shape as of 4/2012) I was able to rappel to the top of the flake on rappel station "4" and downclimb to the belay ledge for pitch one. The belay ledge is _definitely_ on the right hand side of that triangular flake in the photo, not the left, and is a large and friendly place for several people to hang out - you can't miss it. I slung a sturdy block behind the flake at that first belay and was able to rappel to within 6' of the start of the climb. In summary, 2 30m rappels and 2 ~10', secure down climbs got us down from the summit. It's the obvious way down if you climb up the same way. If the extension at the top most belay / rappel station wears out or is removed and isn't replaced, that down climb to the flake will be on the hardest (but still only 5.4) slab, so beware if following my beta.