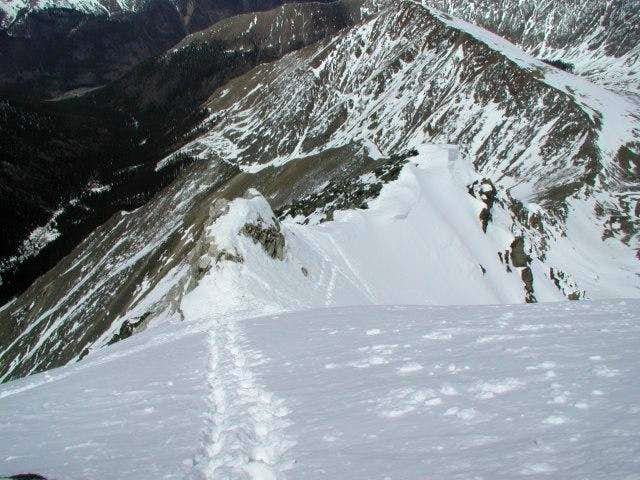 14 May 2005. Within about 150 feet of the summit, a look back at the white block and the top of Dead Dog Couloir. Tracks below the right side of the block were my bypass around the crux. I chose to be on belay and while some snow conditions on the traverse were pretty junky I would be comfortable doing it again without one (but that's since I've done it now!). Snow conditions from the crux to the summit were garbage - loose, unconsolidated, varying between deep and post-hole-y and shallow with rock beneath - and made for slow going.
« PREV NEXT »
Doug Shaw
Lat/Lon: 39.64280°N / 105.8208°W
Image ID: 105726

Thanks for the beta!

A couple of additional questions:

(1) Any guesses on the condition of Dead Dog? It doesn't look like there is a cornice?

(2) What made the snow conditions on your traverse below the crux junky?

Re: Thanks for the beta!

1) My understanding is that Dead Dog rarely has a cornice. South Paw, on the other hand, has some massive cornicing above it...

A party of 6 skied and boarded Dead Dog (one at a time) after climbing the ridge. There were additional ski tracks from days previous. I have heard that people were skiing it the next day (15 May), so the conditions may be acceptable, but there was a good bit of sloughing and small slide activity evident at the base of the E face of Torreys. Also, we did hear some odd sounds from the snowpack while kicking steps across the snowfields on the N face of Grays when we were descending. Not whoompfing or cracking, perhaps the slightest bit hollow in a couple spots; nothing that panicked us but it got our attention.

In general I'm opting to give general snow climbing another week or two before I look to get started. There's plenty of snow this year and if we run out there will be more next year. :)

I'd advise anybody climbing snow this early in the season to have the full complement of basic avy gear - beacon, probe, shovel.

2) The snow was very unconsolidated around the base of the white block crux but I suspect that was due to the proximity of the block itself. Dropping down into the top of Dead Dog the snow was good for self-belaying, and it was okay climbing up the far side of the block, but a few spots on the traverse under the block the snow wouldn't have held a belay with the axe and half of my arm buried in the snow...