To the Breche from Gavarnie 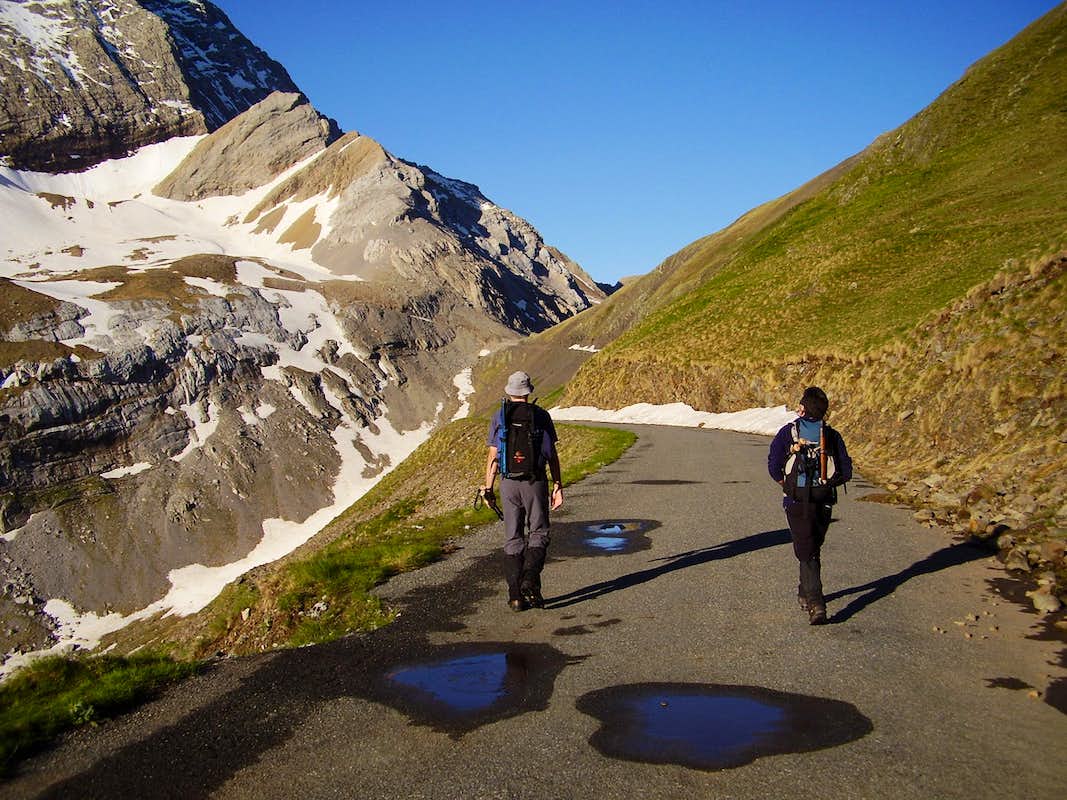 We were staying for a week in the Town of Gavarnie near Lourdes in the French Pyrenees and after our ascent of Vignemale earlier in the week, Ken, Peter and I decided that we wanted to visit the Breche du Roland, having failed to reach it from Bujareulo some years previously whilst staying in Torla after crossing the Spanish/French border at the abandoned road head on the French side. From there we (Ken & John) ploughed through thigh deep soft wet snow until just below the access valley that leads to the Sarradets hut. During the traverse we were alarmed at times by snow/icefalls from the Taillón massif. The problem then was that we had left Bucarelo too late to ensure that the snow would still be frozen. Ken managed to ascend the hanging valley far enough to get a sight of the refuge but I was wacked out and stayed below. 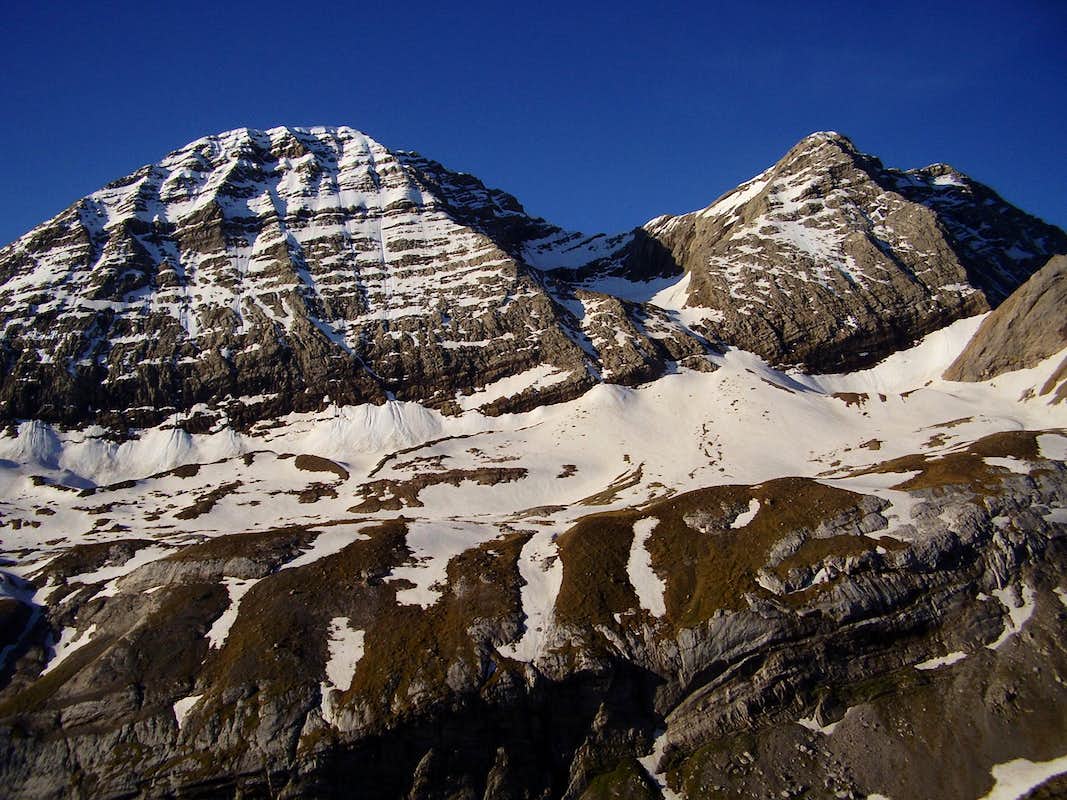 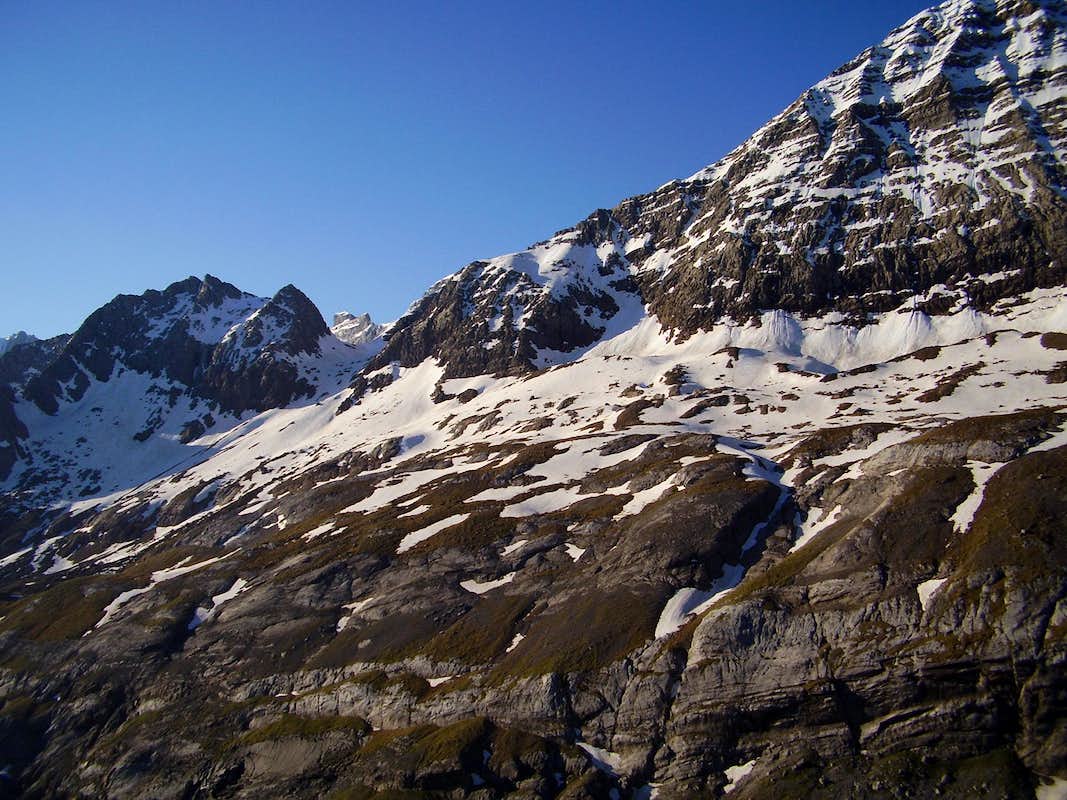 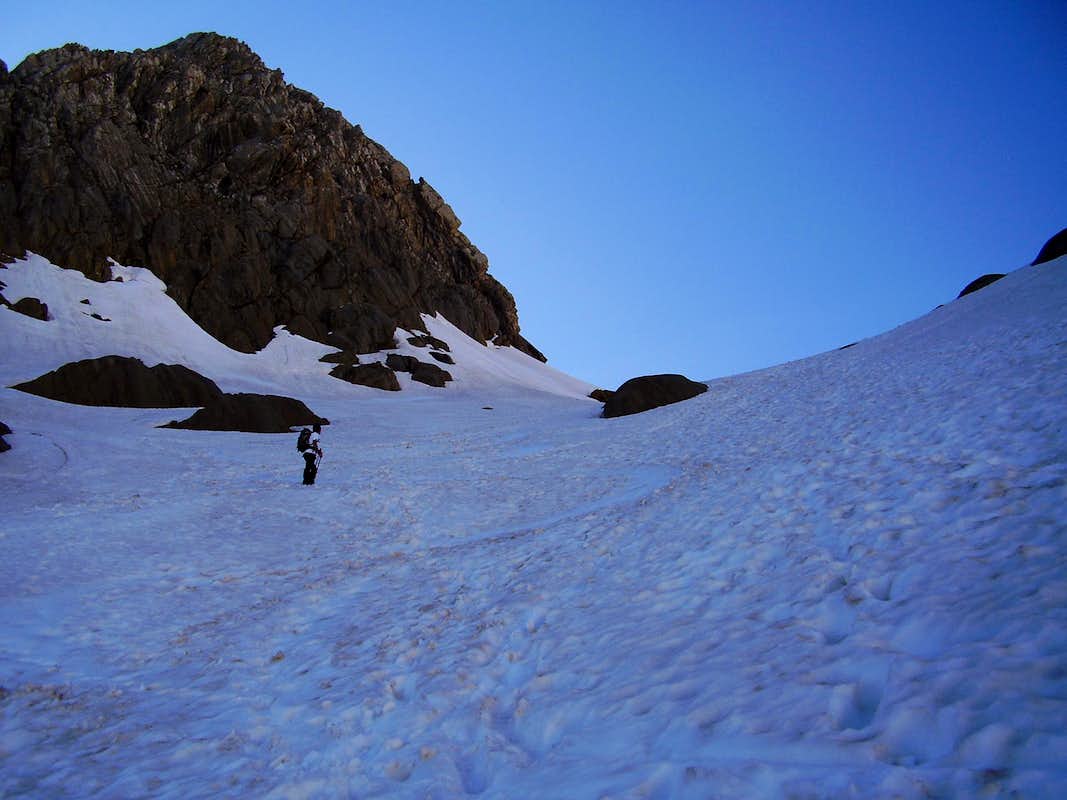 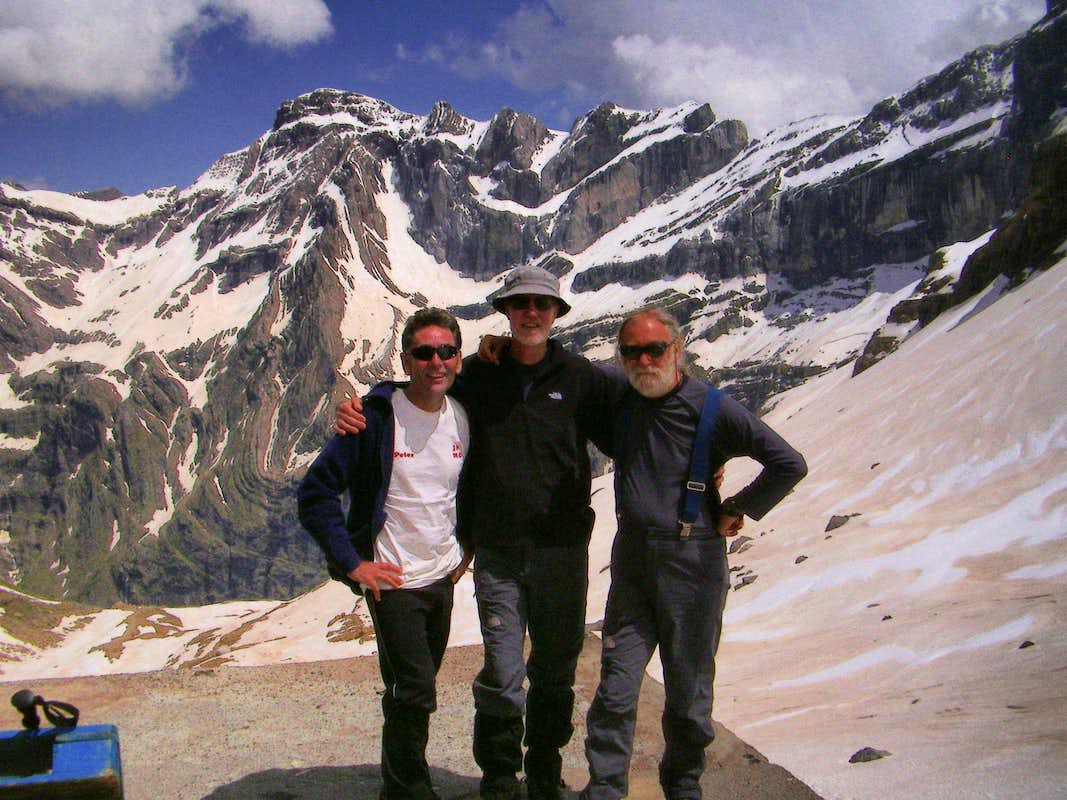 On our 2nd visit, this time with Peter (Ken's brother) we drove up to a high level car park at the Col de Tentes from Gavarnie at a reasonably early hour and the snow was still firm.

On the traverse we met up with Francois Bres (http://francois.bres.free.fr/)who gave us some encouragement to do Taillón as well after reaching the Breche. This sounded a reasonable idea so we quickly agreed to have a go.


The traverse below Taillón was straightforward and didn't require too much effort until we arrived at the hanging valley below the Sarradets hut. Then a few hundred metres of steep frozen snow using our ice axes sure got the blood pumping, so we were well warmed up by the time we arrived at the hut. It was a good feeling to have ascended this section after my failure the first time. 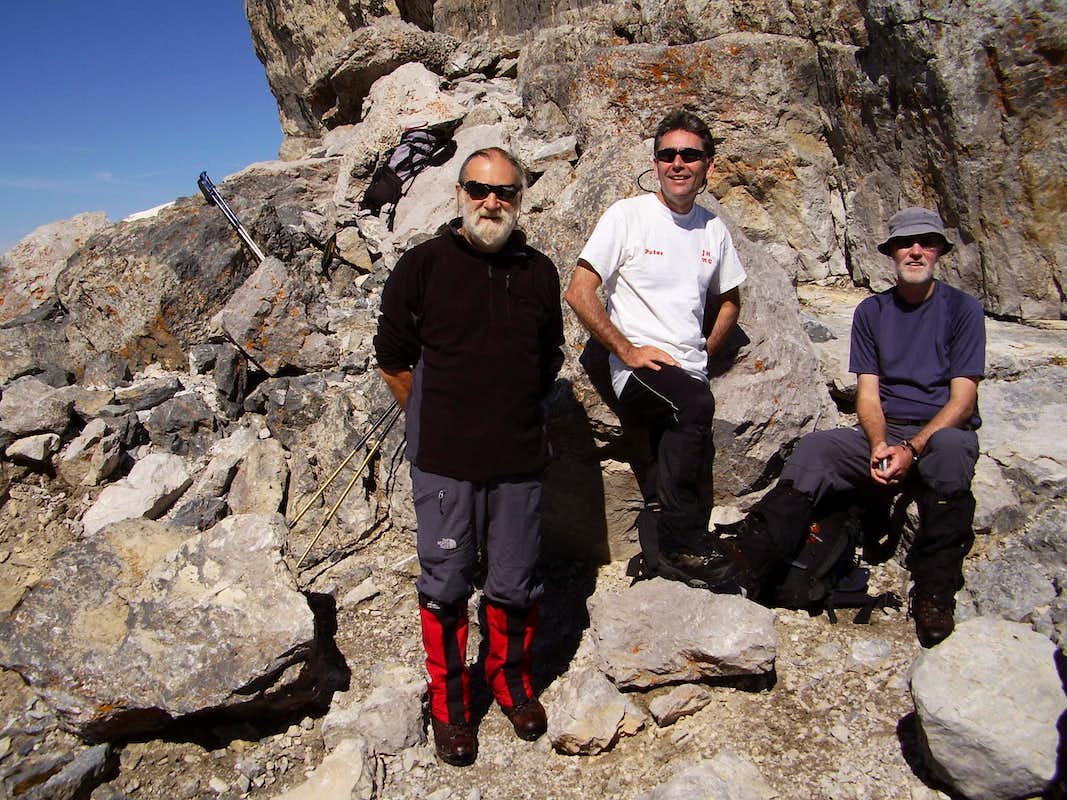 From the hut, the way to the Breche was quite clear (see title foto) and required about 40 minutes of steep snow climbing to reach the point where France becomes Spain. It was great to be there at last. 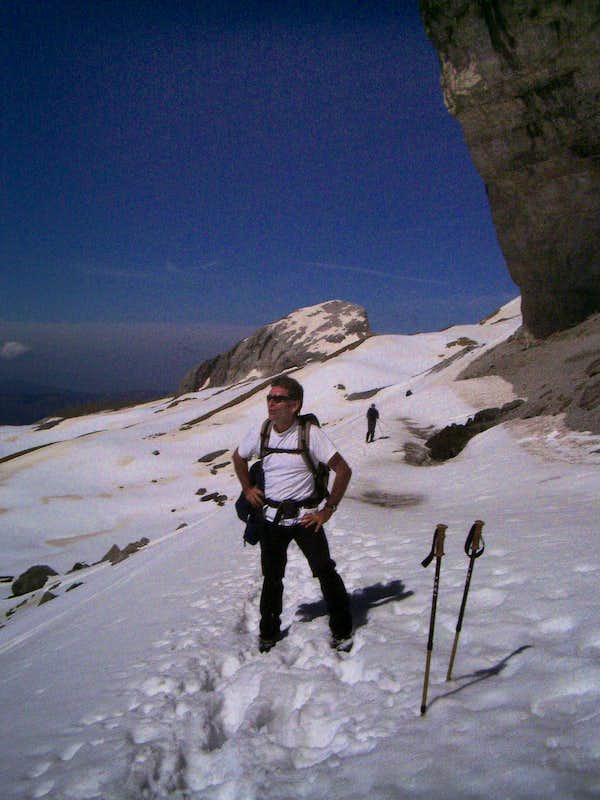 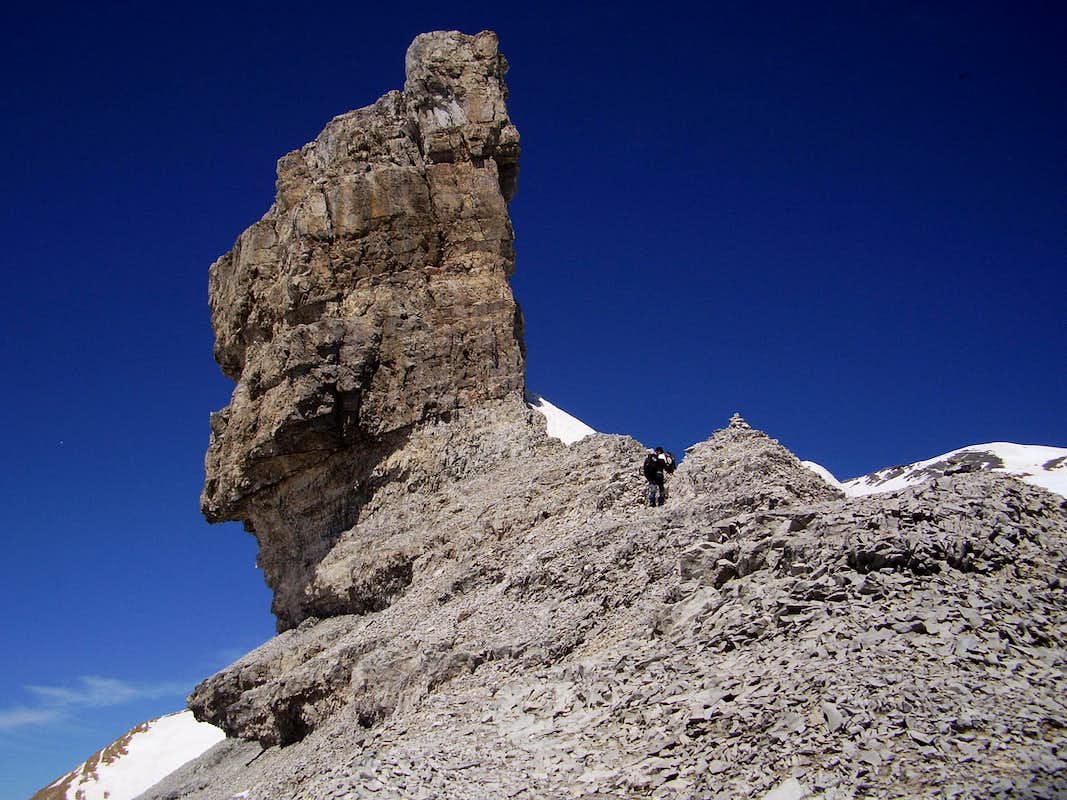 After a brief foto stop we moved to the left of the Breche under the overhanging cliff. Francois pointed out that this is sometimes a dangerous place due to falling icicles when the temperature rises in summer.

After clearing the danger area we climbed up towards the Dedo (finger) which being separated from the main cliff had created a gap and gained the name of 'the false breche'. Moving behind the finger we soon saw the way to Taillón ahead. The ascent to the summit over firm snow and rock was as straight forward as Francois had predicted although some care was required as there were many large cornices on the northern lip of the ascent ridge. 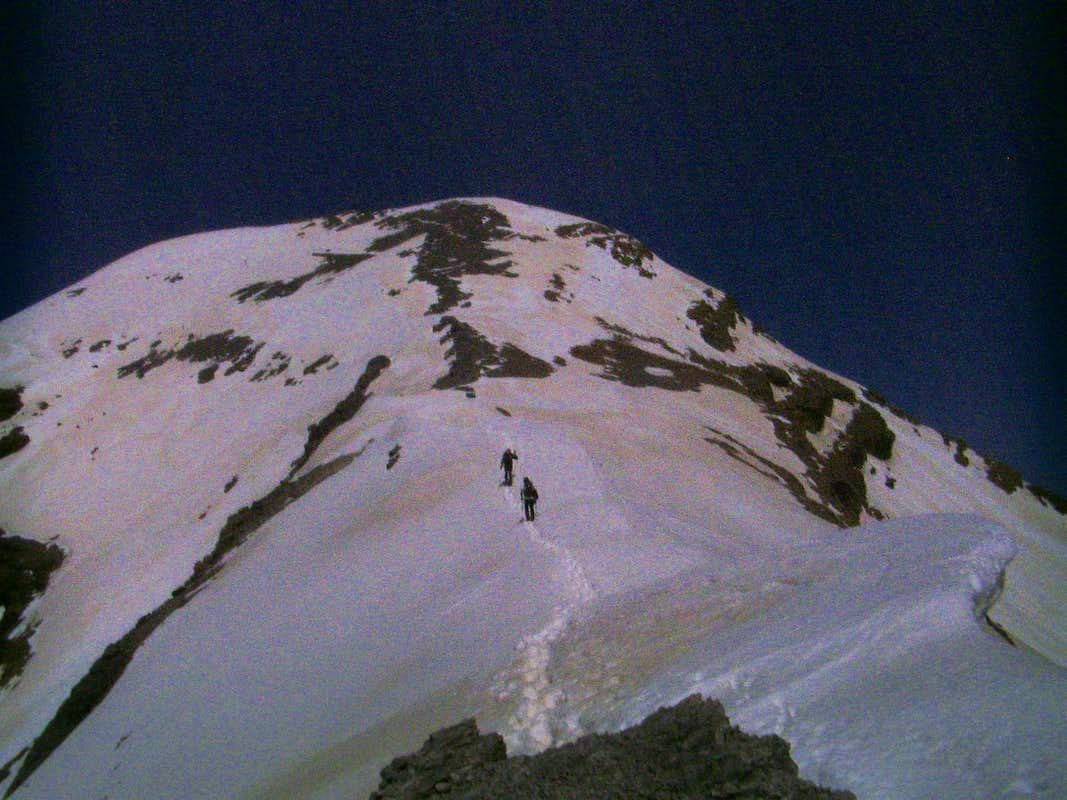 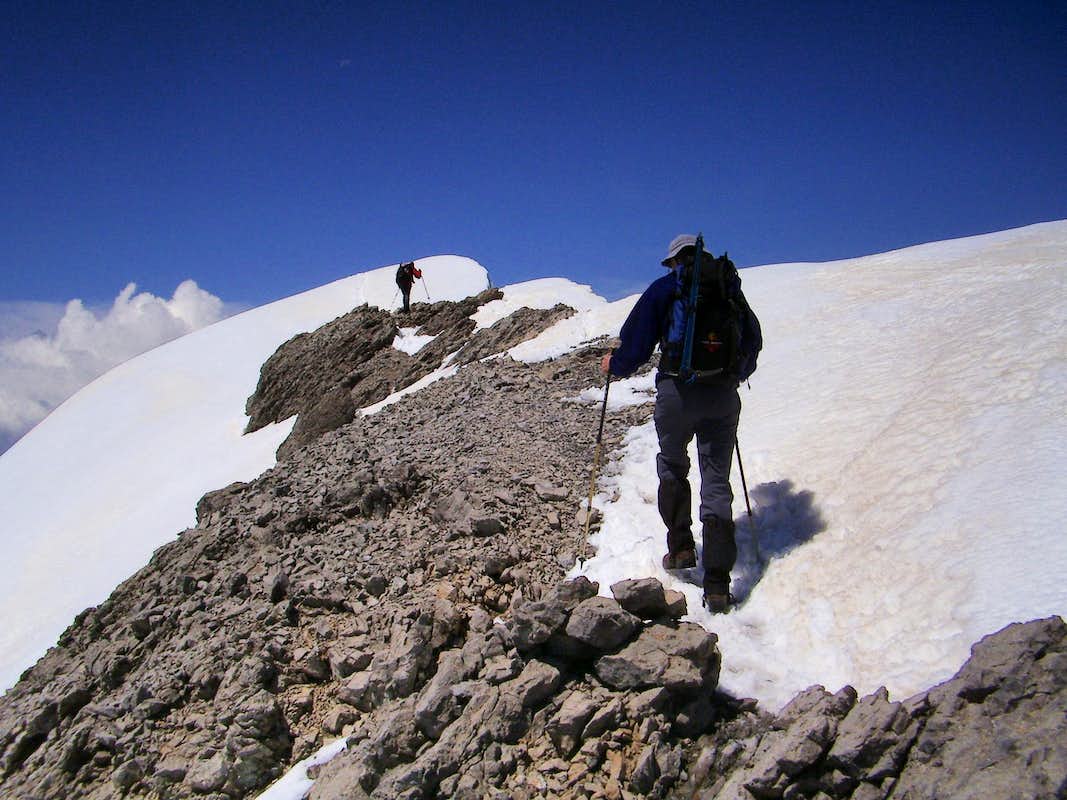 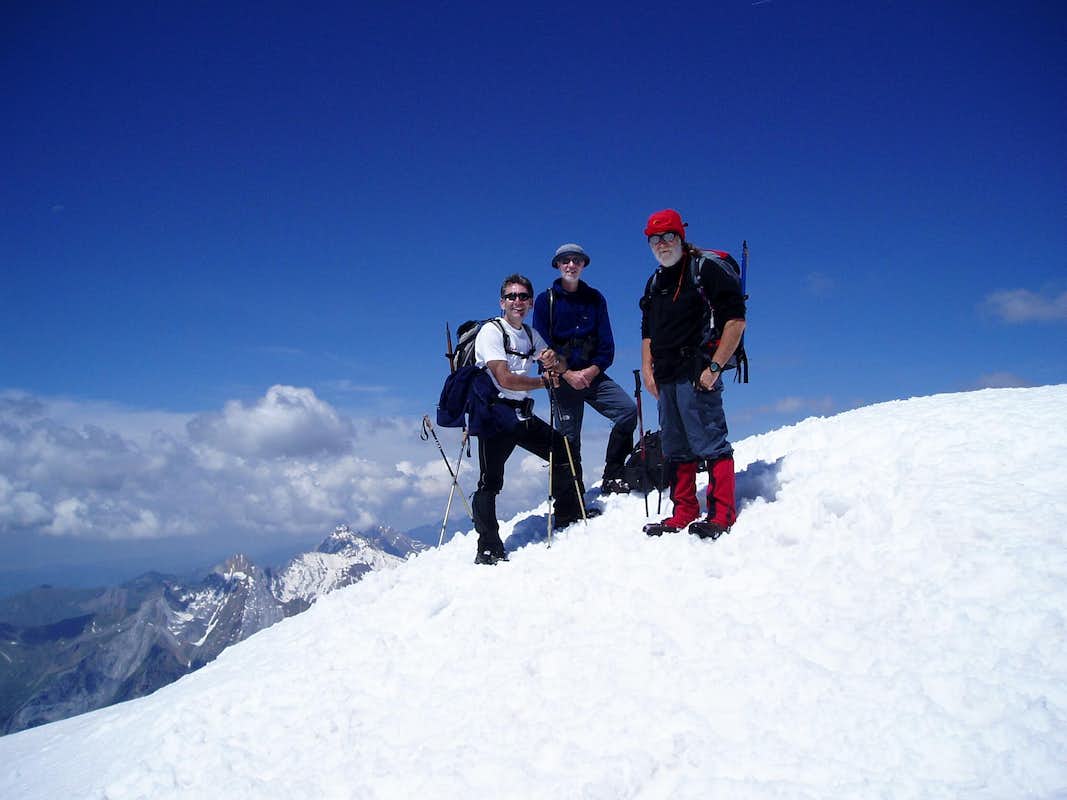 Higher up the way was clear of snow in places and we soon arrived at the summit cone which was pure snow. 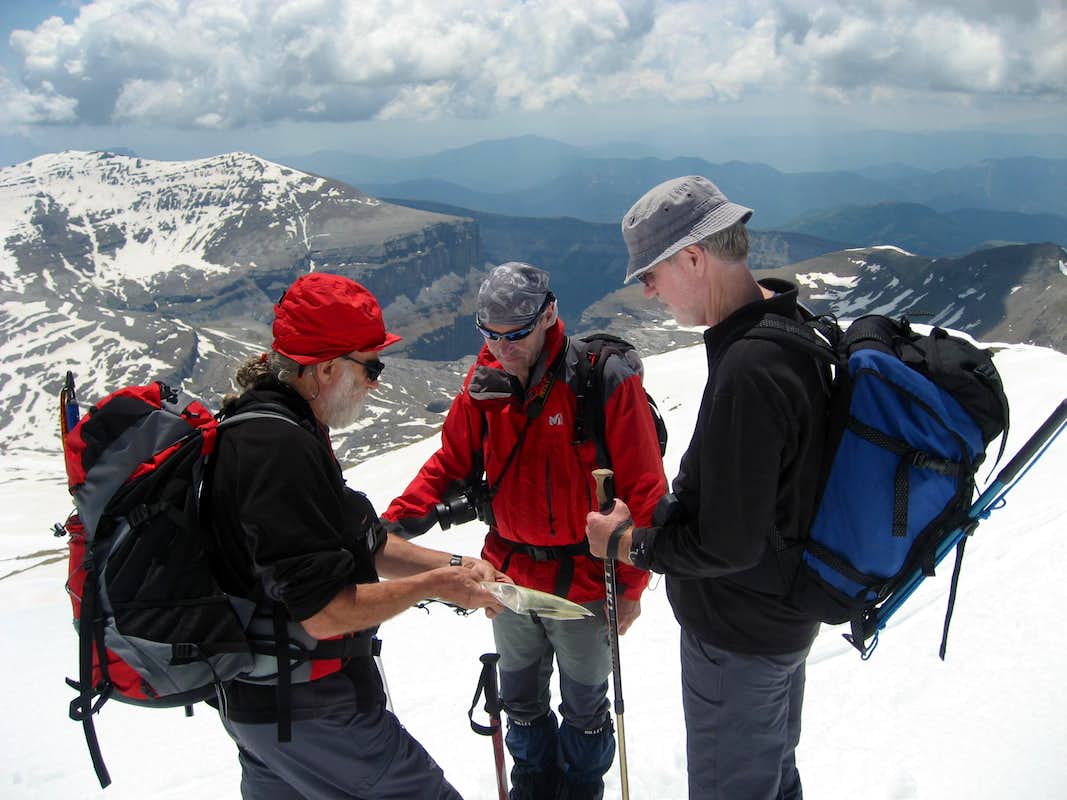 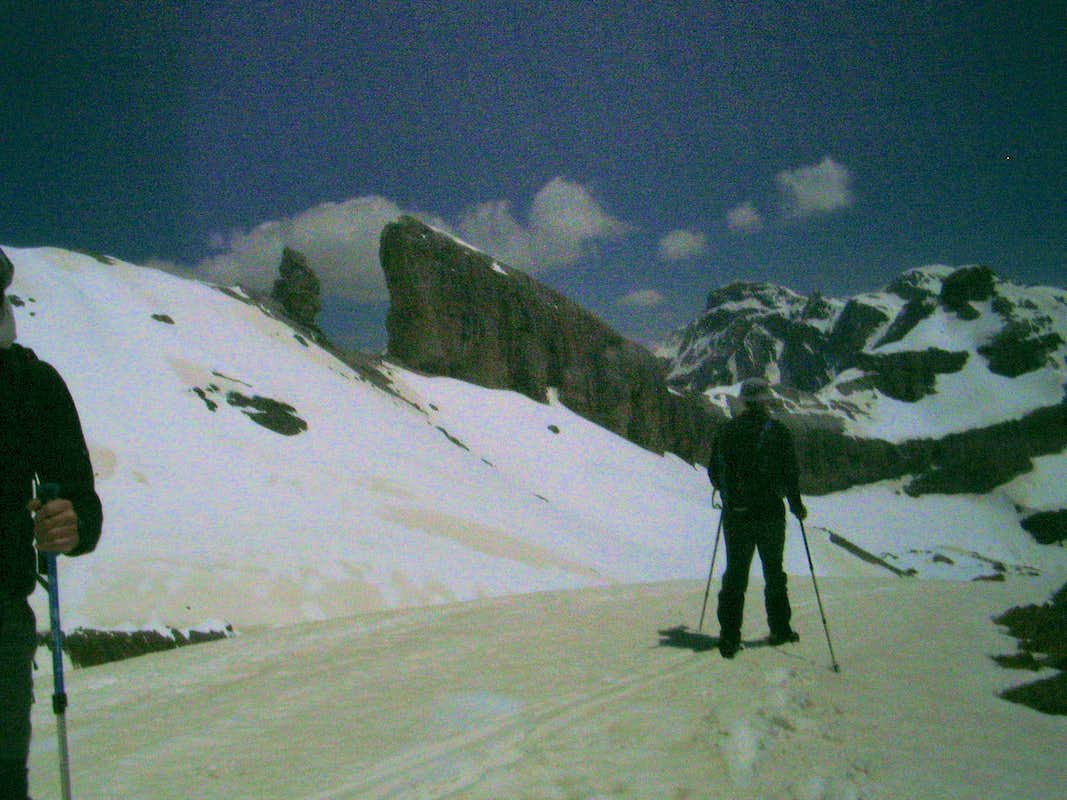 It was at the summit over lunch that a slight international incident occured, we had assumed that we would follow the descent between Taillón and Pico de Gabieto that would lead back down towards the start of the traverse below Taillón (this can be seen in the foto of the right hand section of the traverse below Taillón.  Francois baulked a bit at this suggestion and after consulting another visitor to the summit (Spanish) who had commented that a rope would be required for the descent of our proposed route, we all agreed to return via the Breche.
Instead of going back via the Dedo, we dropped down the snowy ridge from Taillón's snow-cone summit towards the Collado Blanco and followed the 2850m. contour line on softish snow all the way back to the Breche with the sight of the impressive Ordesa Gorge on our right hand side. 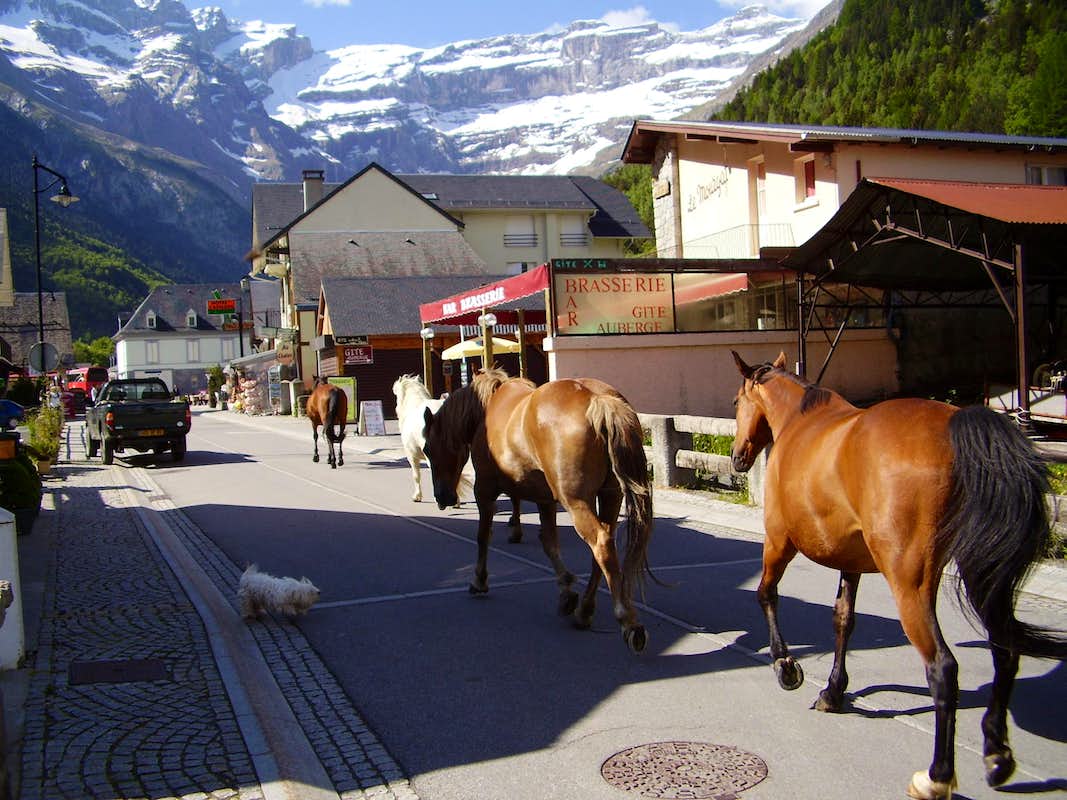 A pleasant outing requiring an ice axe but not crampons (we took them just in case but they stayed in the sacs), with the added benefit of a refreshment stop or overnight abode if required on the way. Accomodation is available in Gavarnie at the excellent CAF Holle refuge or at various Hotels and Guesthouses in the town. Gavarnie is a tourist hotspot in the July/August season so is best avoided unless you like crowds and horses. Our visit in June was ideal, capturing the long daylight hours and with plenty of room in the refuge.

A trip to the area must include a visit to the Cirque de Gavarnie which is a World Heritage site and can be easily reached from the town of Gavarnie by foot or hired horse in the season.

I'm glad to see you enjoyed the climb, but... check the map you indicate at the end of your Trip Report. The Alpina map "Posets-Perdiguero" does not cover this area. You probably meant "Alpina map Ordesa-Monte Perdido" or "Alpina map Vignemale-Bujaruelo"

By the way, I liked specially your complete illustration of the climb by pictures, covering almost every moment of the trip

Hola Eza,
thanks for your kind comments and for pointing out my error.
cheers Johnnie