The Watkin Path, a fine day out in May.

On one of my occasional days out with the lads, I fancied going the long way up Snowdon or from the rear as I suggested to Colin to some sniggering. I thought it was my first time, but Ken assured me that he and I had done it before.

Ken couldn’t make it this time, so there was just the two of us togging-up at the car park where the ticket machine was out of order, giving us a free spot and we soon headed across the road to the start of the Watkin Path. 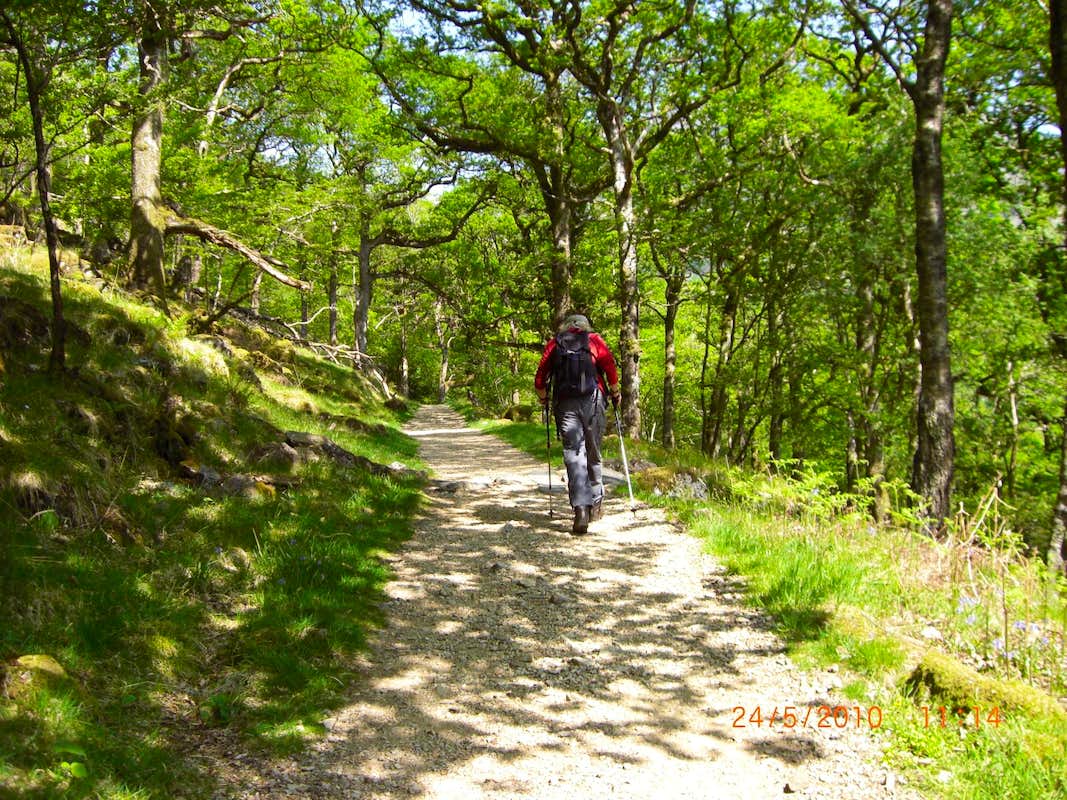 Colin heads up through the oakwoods

The path led easily upwards from the Gwynant valley through leafy oak woods, passing through some venerable wrought iron gates, clear evidence of the age of the trail and then up slopes of bright bracken alongside the sparkling Afon Cwm Llan and its waterfalls.
At one point the path intersected with a farmers road and here we had to dodge a large excavator that was also intent on going up the valley. The driver was a gent though and allowed us the go ahead. We wondered what he was up to, but later on we saw him at the side of the Afon so we guessed that he was improving the watercourse or something similar.
At this stage we had only seen one couple on our way up and they looked more like they were searching for a ‘romantic interlude’ spot rather than trogging up the hill. It was amazingly quiet for such a fine route.
It was a beautifully sunny spring day and we anticipated fine views once we reached the top of our route at the summit of
Y Wyddfa 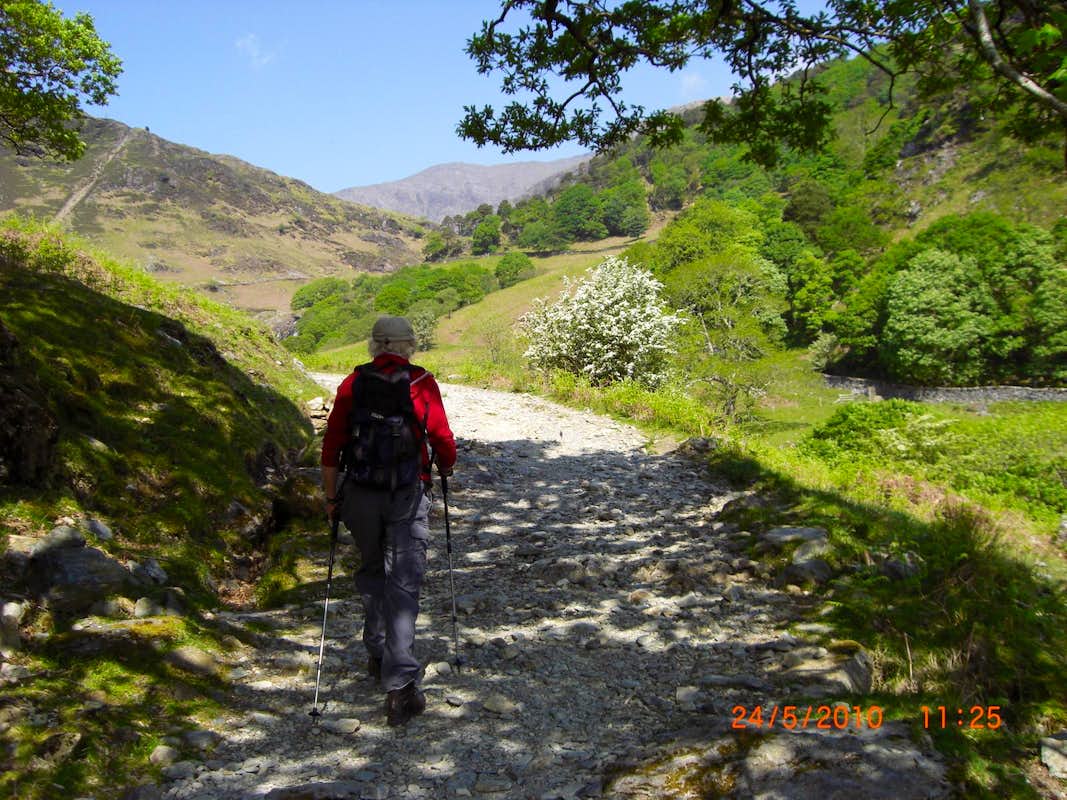 Colin leaves the shady shelter of the woods. 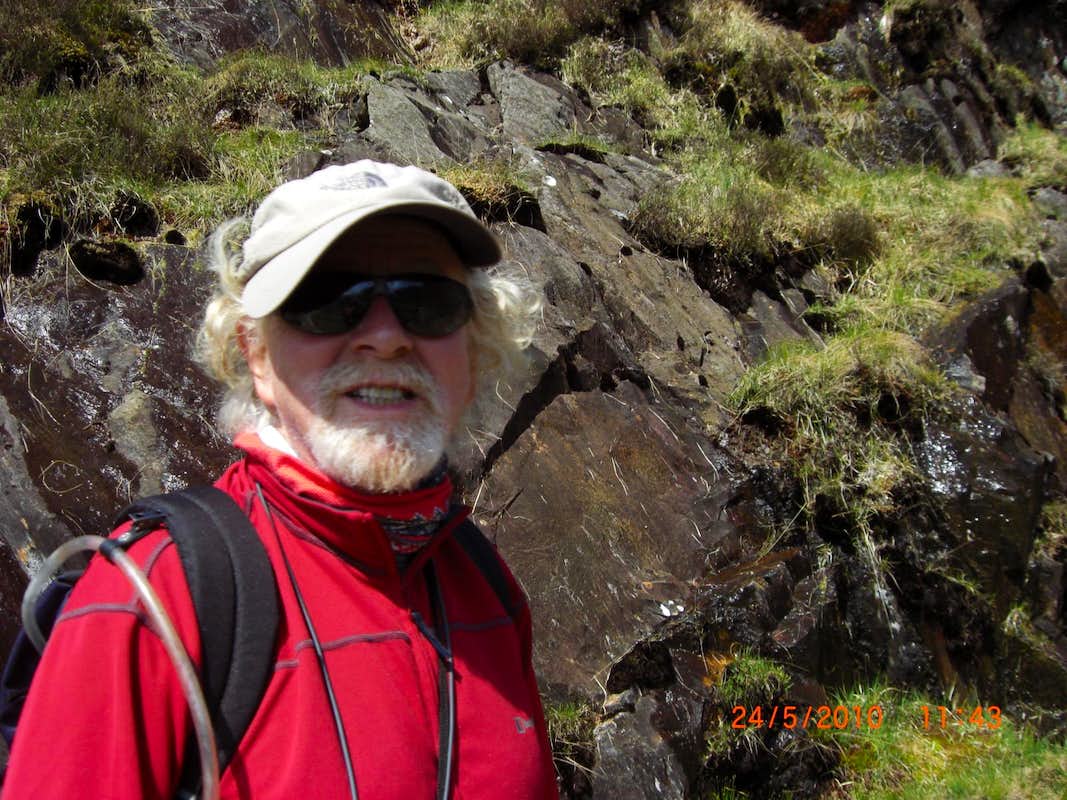 Alongside the Afon, the trail had been reinforced with big stones making it a virtual staircase, but this is typical in Snowdonia where the popularity of routes creates serious erosion, leading to measures taken by the National Park Authority and its volunteers to make robust and durable repairs. 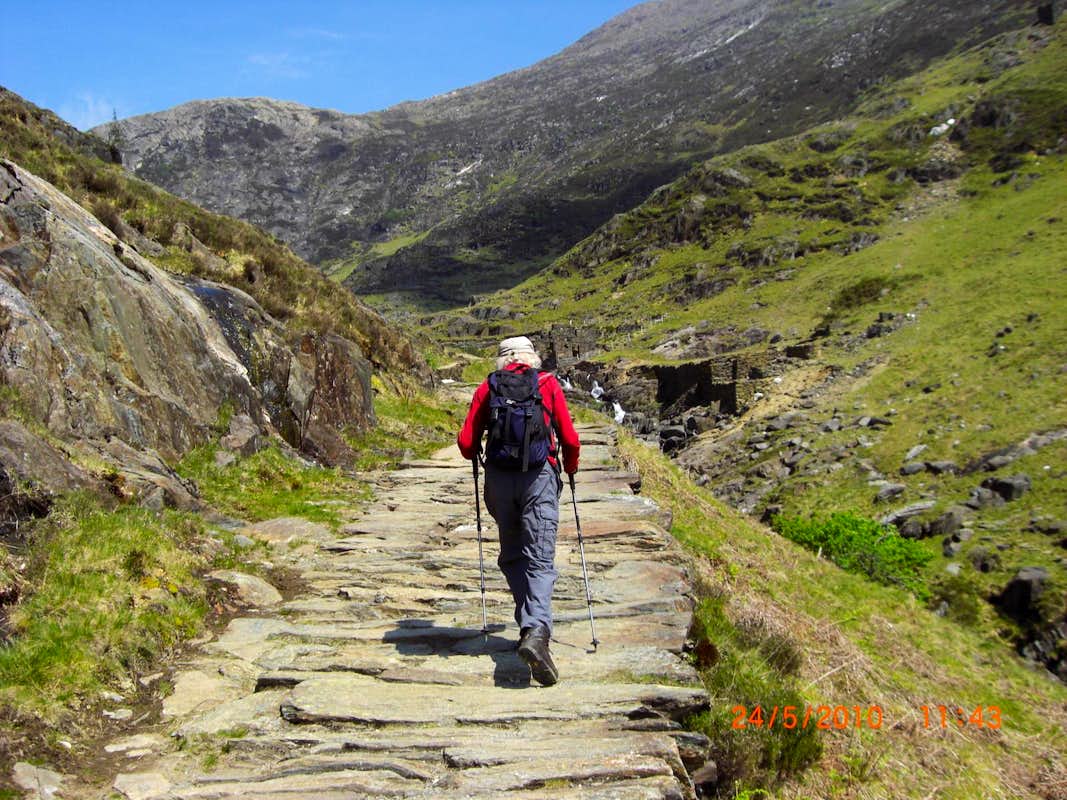 Big stones on the reinforced path. 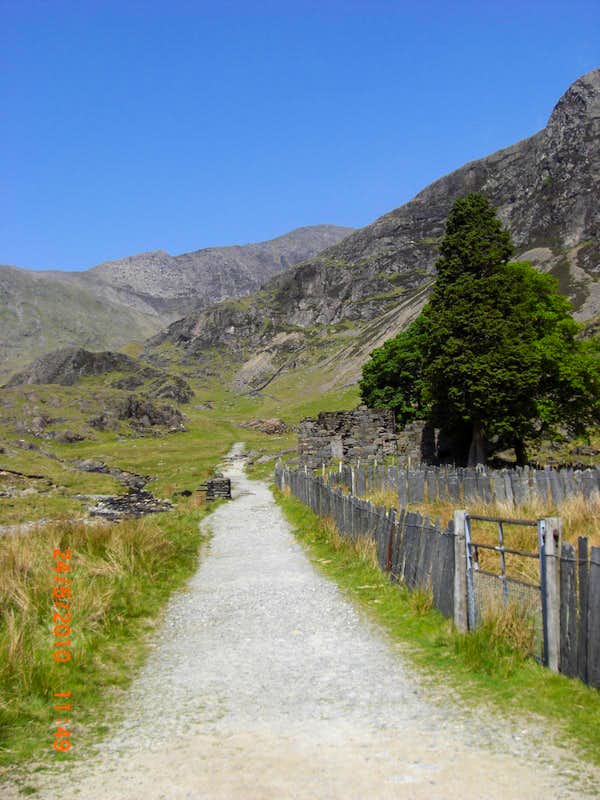 Picket fencing on the boundary of the old quarry compound.

The path reaches open ground, running parallel to a disused ‘incline’ a reminder of the former quarrying nature of the local industry.

Near the closest point between the Watkin Path and the incline are situated the ruins of the quarry master’s house and other associated buildings.


Higher up into the valley between the western slopes of Lliwedd and the bounding cliffs of Clogwyn Ddu across the valley, we passed by the Gladstone Rock where our former Prime Minister who inspired the inventor of the Gladstone Bag to name it after him. (mine was very useful when I was a telephone engineer), made a speech to the locals.

Opposite the boulder is a nice slabby wall that gives good rock climbing fun if you want a break from the walk. We passed this by though and carried on up the rising trail to link up with the path between Lliwedd and the ridge up to Y Wyddfa.

This forms a very interesting section of the Snowdon Horseshoe and although not a scrambly as Crib Goch on the other leg of the horseshoe, it still has great views across Glasllyn and Llyn Llydaw below. 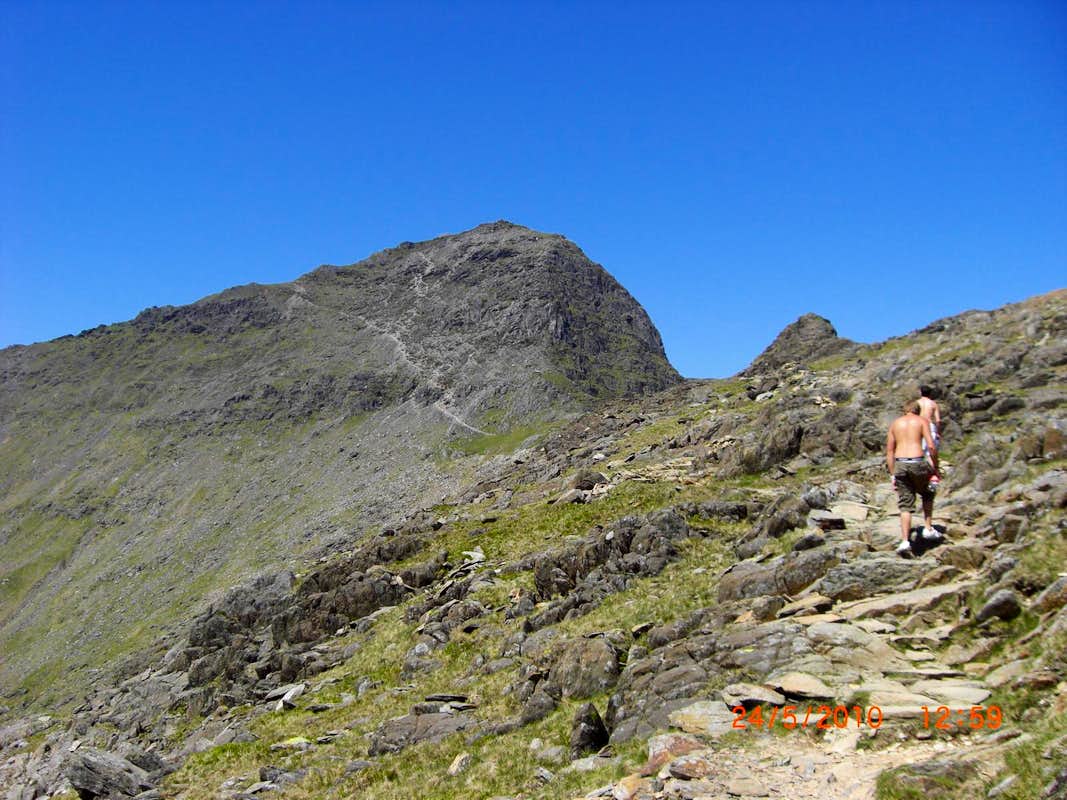 Blazing heat and a high sunburn risk!
On the trail we met a couple of young lads who were unsuitably clad in shorts and trainers.
They told us it was the first time they had walked up a mountain.
They were profusely sweating and puffing and panting along and were at a high risk of sunburn as their T shirts were off at the hottest time of the day with the sun blazing down.

We paused a while to give them some ‘old codgers’ advice about the risks of skin cancer and to tell them how far they had left to go to the top. 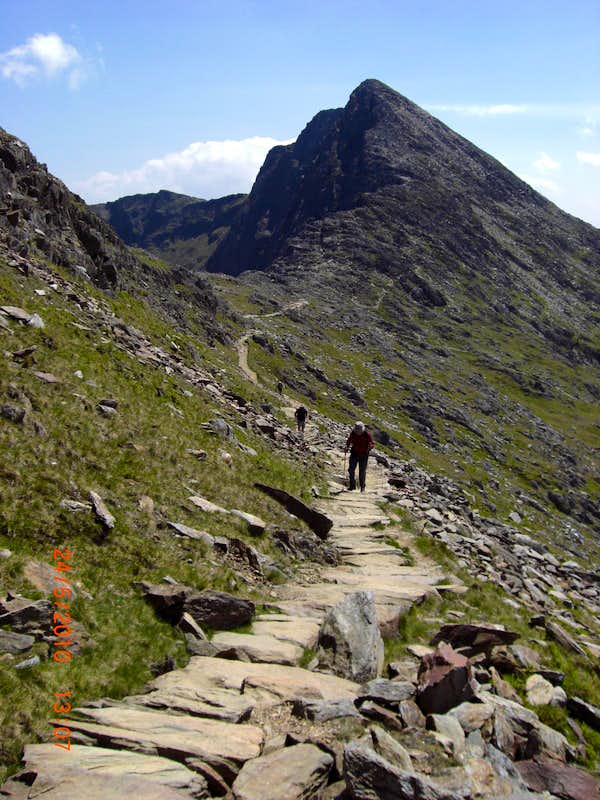 Colin on the 'staircase'
The trail at this point was still fine, the volunteers had done a fantastic job in levelling and smoothing the surfaces on the gentle inclines and putting broad steps on the steeper sections.

As we rose higher, we turned back to see the crest of the ridge as it passed over the summit of Lliwedd.

I was stirred by memories of the seventies when we then lead the Ford Climbing Club (Halewood) over that trail on the start of our attempt on “The Fourteen Peaks”.

In those far off days (ha ha) the trail was a bit more rudimentary and we were walking through the clouds at the time with no views at all but on this later visit the weather was perfect. 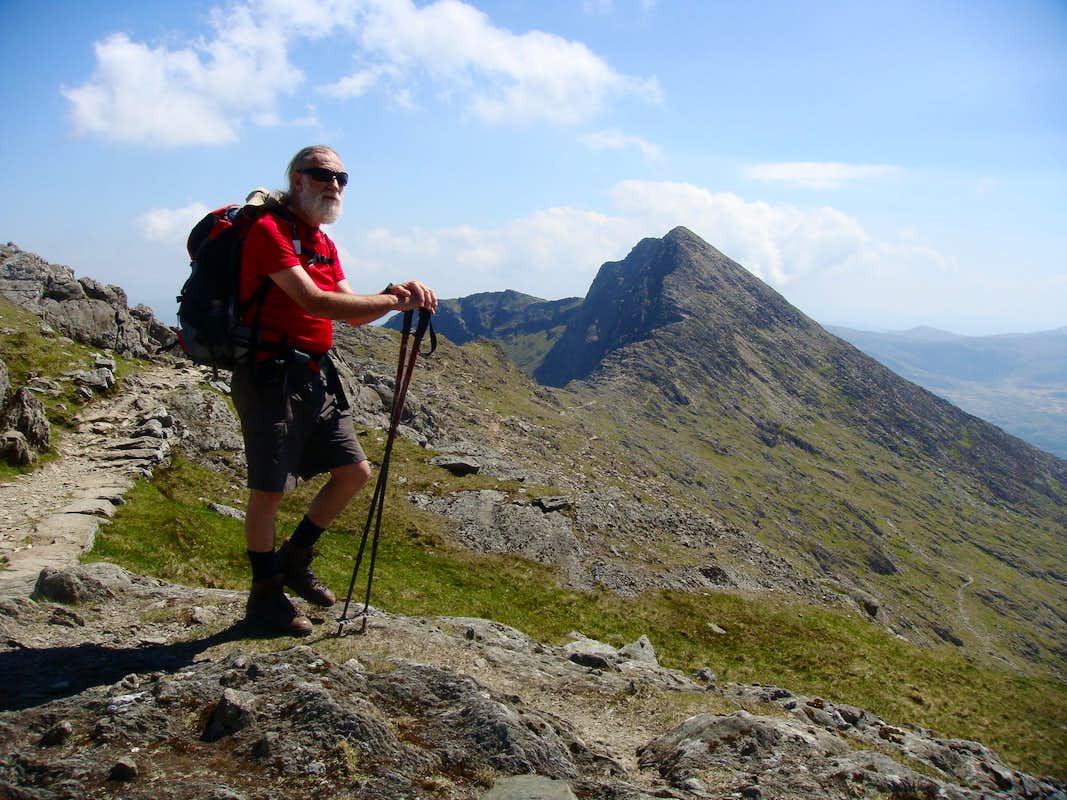 Johnnie pauses for breath - Foto by Colin.
Sometimes though I think the path constructors have a sadistic sense of humour, making the rise of the steps or their tread length just outside the average person’s pace. You then end up hopping along like Jimmy Cricket or else lolloping about in a passing resemblance to Charles Lawton in his role as Quasimodo.

I said the same to my wife recently when we ascended the stairs at the side of the Guggenheim Museum in Bilbao.


The Watkin Path was not too bad though, far better than the steps down from Devil’s kitchen. 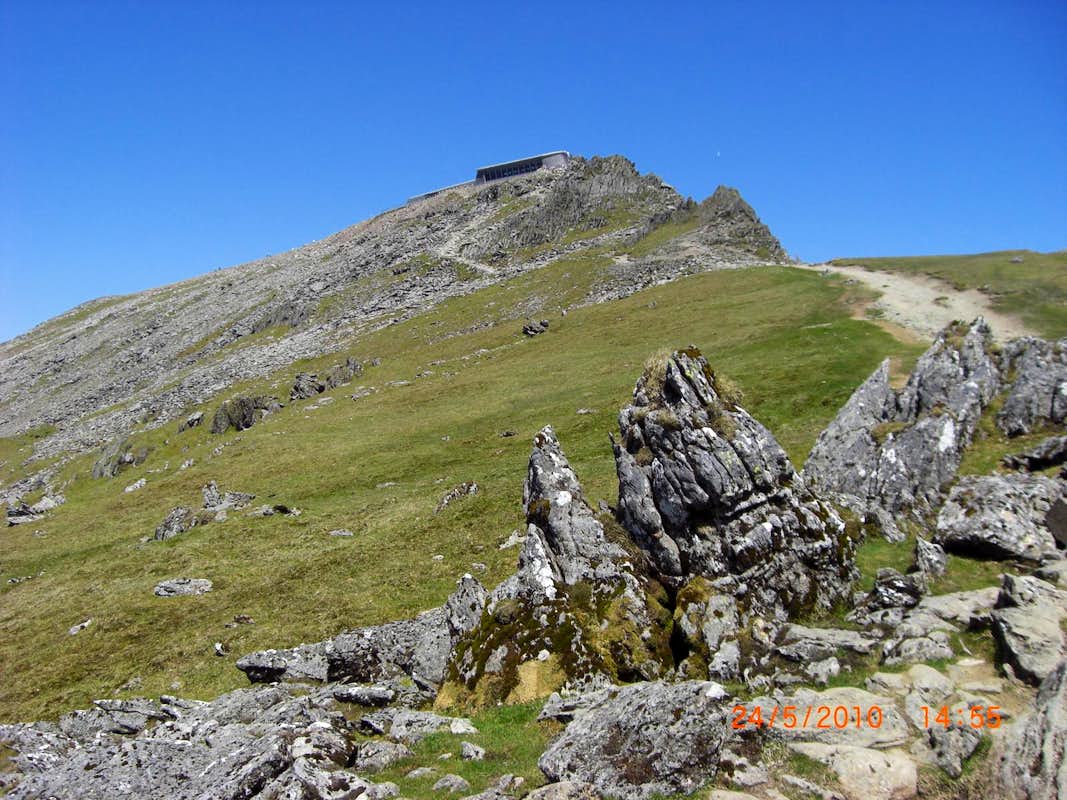 After cresting the ridge, the new summit cafe came into view.
It was the first time I’d seen it since its recent completion and although the thought of a cafe on top of a mountain is not easily digested by me, I did feel that the architect had made a reasonable fist of blending the building into the environment, as the two tone grey stones and steel roof cladding blended in quite well with the surrounding dolerite outcrops.


We soon arrived at the summit and as tradition demands we reached up to touch the trig point and took our summit pictures after waiting for a gap in the multitudes. Dropping down behind the cafe and crossing the rail tracks of the funicular railway we stopped for a look at one of the locomotives before descending towards Bwylch Main where we sat down out of the hubbub and ate our sandwiches. 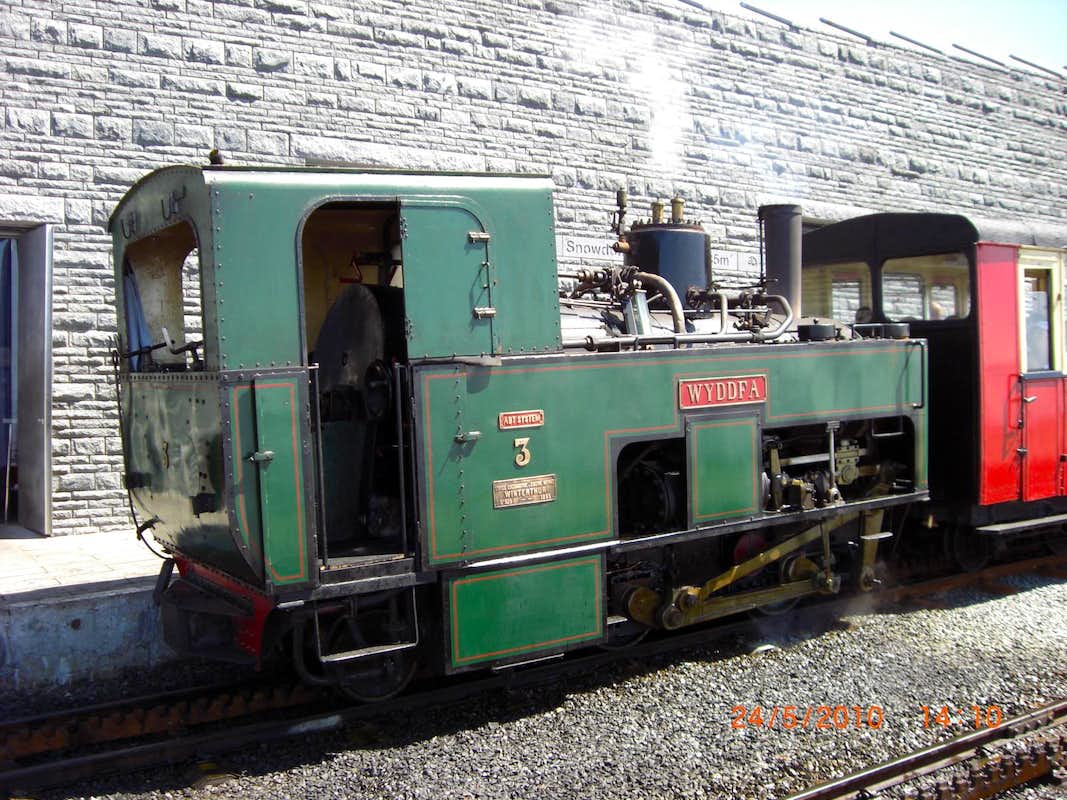 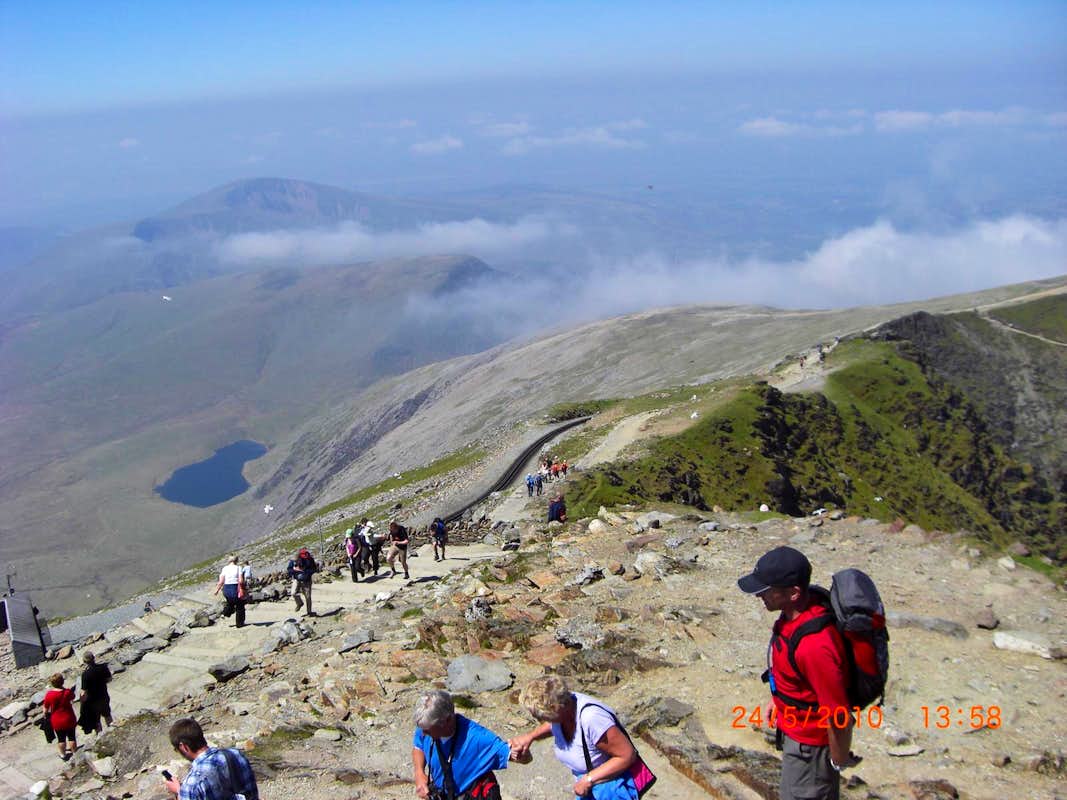 Crowds on the summit of Y Wyddfa. 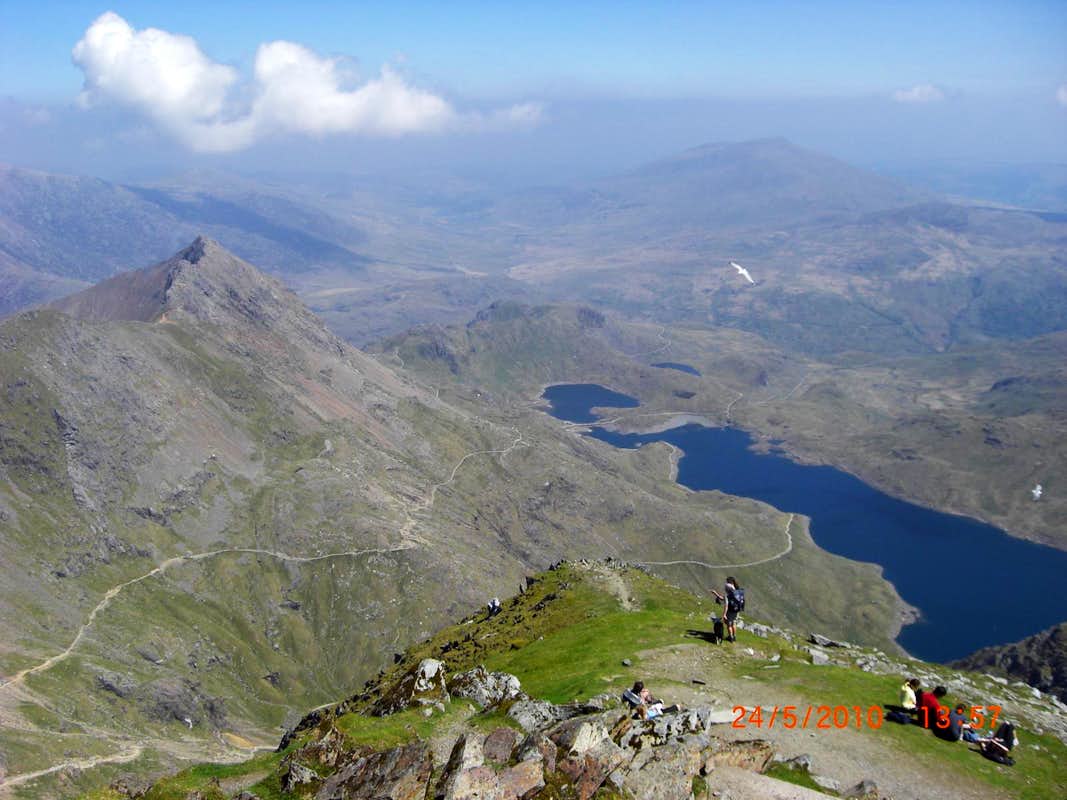 The views from the summit were excellent with very little haze considering how hot it was.
Normally, a fine cold day in winter will provide the clearest air but as we looked down to the inside of the horseshoe, the PYG track below Crib Goch was very distinct as was the line of the Miner’s track as it crosses the causeway of Llyn Llydaw.

Beyond the Llyn is the summit of Moel Siabod where the locals say if you can see it, it’s going to rain! But! If you can’t see it it’s already raining. I guess you would call that North Wales humour?

We hung around for quite a while admiring the scenery but then once we’d finished our lunch, we headed down the south ridge, as we’d agreed that we fancied a return trail with some different viewpoints. 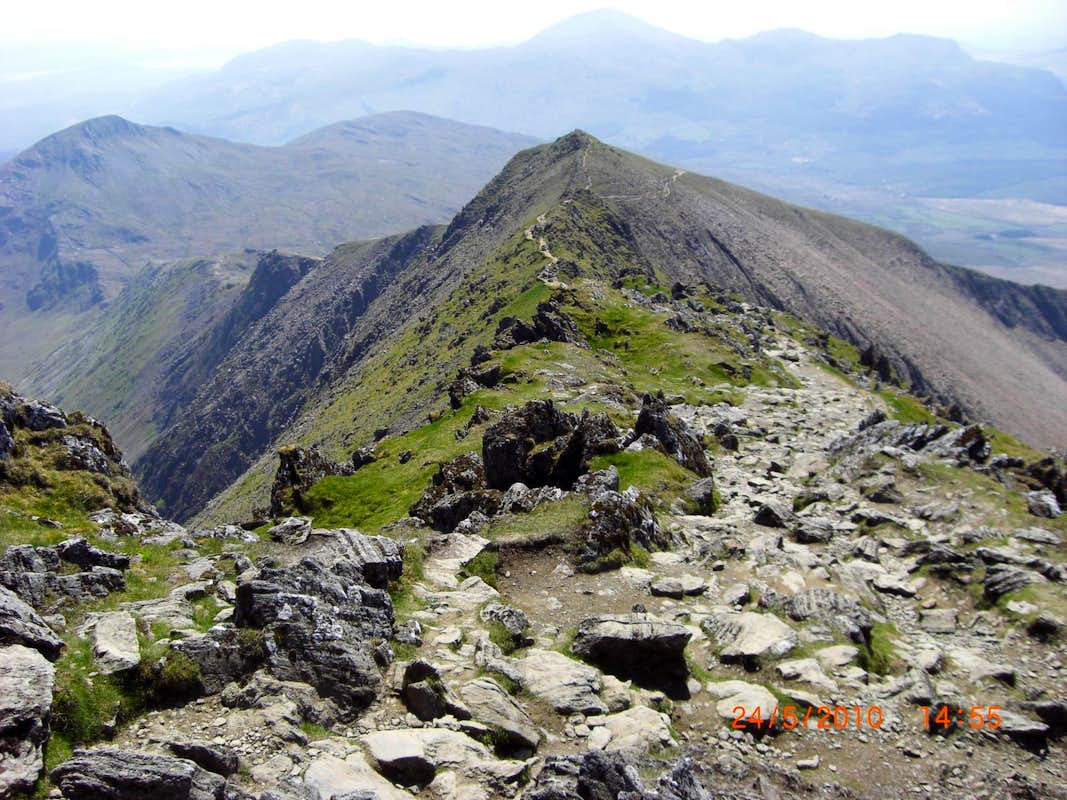 The south ridge of Y Wyddfa. 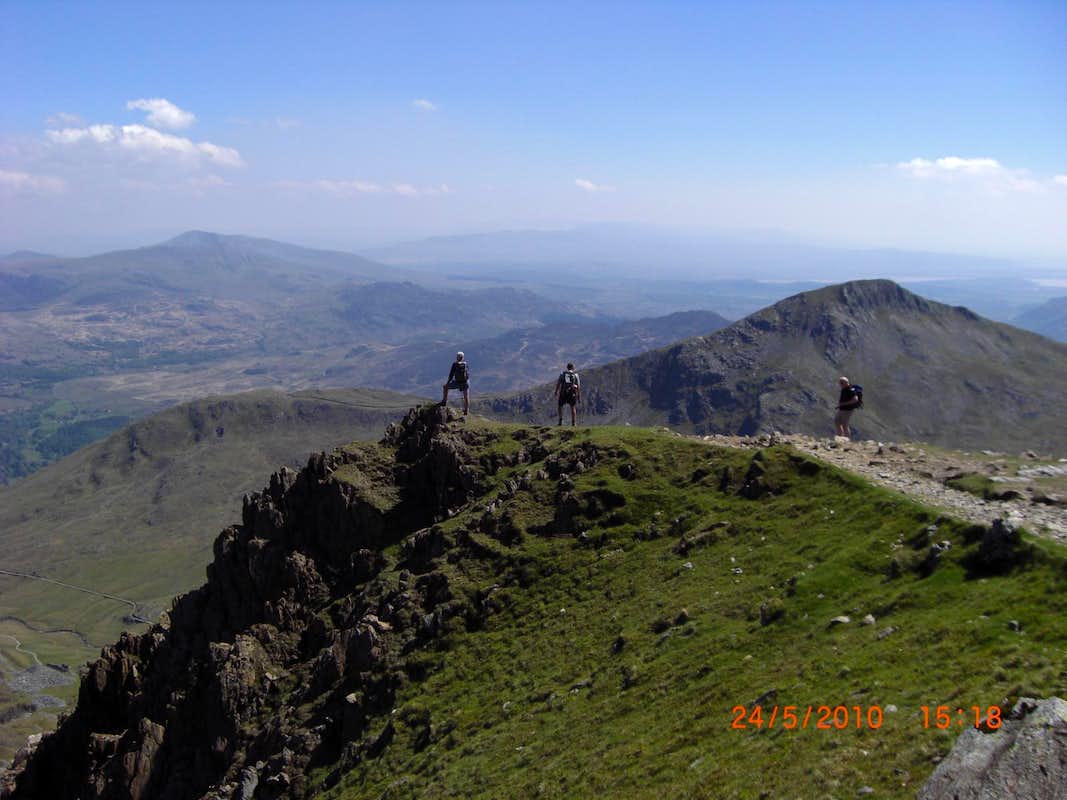 On the way up we’d been followed and overtaken by four fit welsh lads and we’d had a bit of banter with them.

The path was steep but reasonably well defined over broken ground apart from a short section that had been ‘staircased’. We descended quite quickly to reach a point in the ridge where an obvious path led down into the valley again. 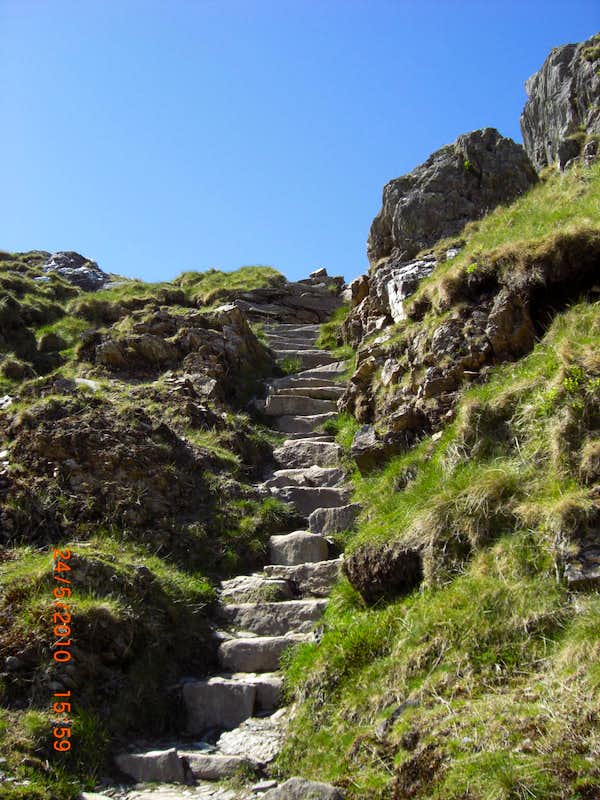 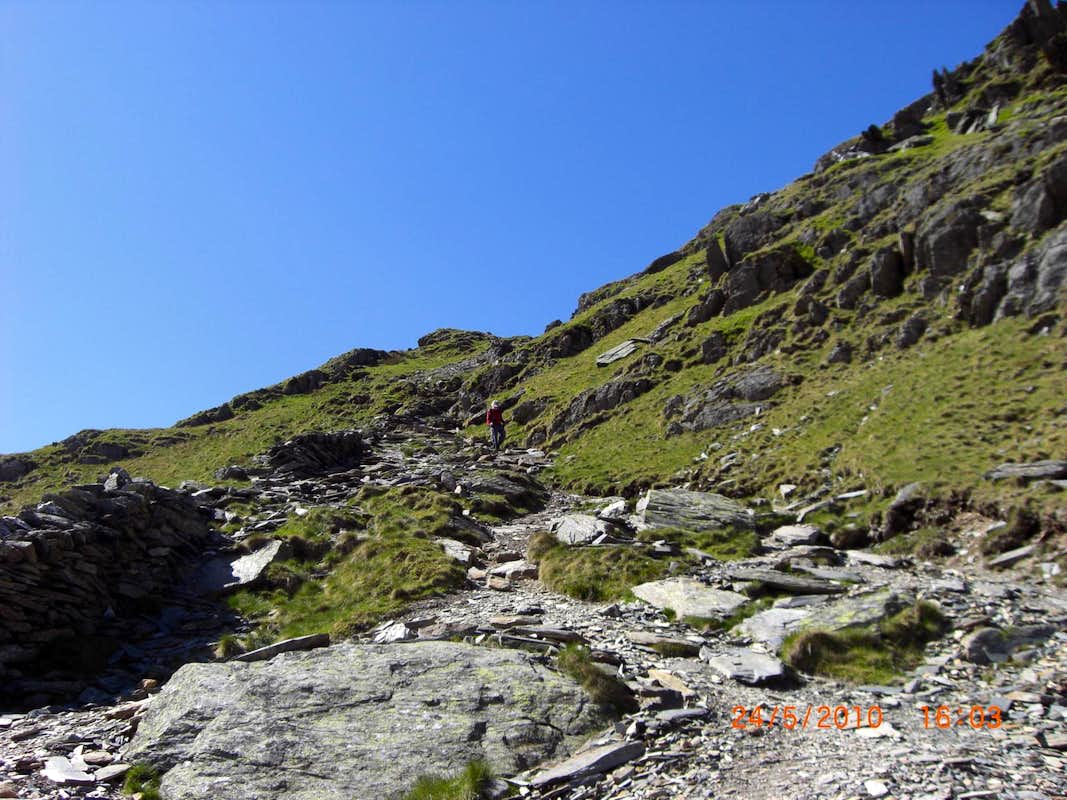 Colin descends from the south ridge.

From there we could see virtually the whole of our ascent route. After a short, scrabbly descent from the ridgeline, the indistinct path led across the moss and heather and eventually connected to the other end of the ‘incline‘ that we had seen before on the way up.


The old timber sleepers were still in place here and there and hopping between these we soon descended until we could take a connecting link trail back to our earlier path near to the ruined buildings.

We had fine views along the trail of our morning route and we still couldn’t see many others enjoying what must be one of the best paths in North Wales. 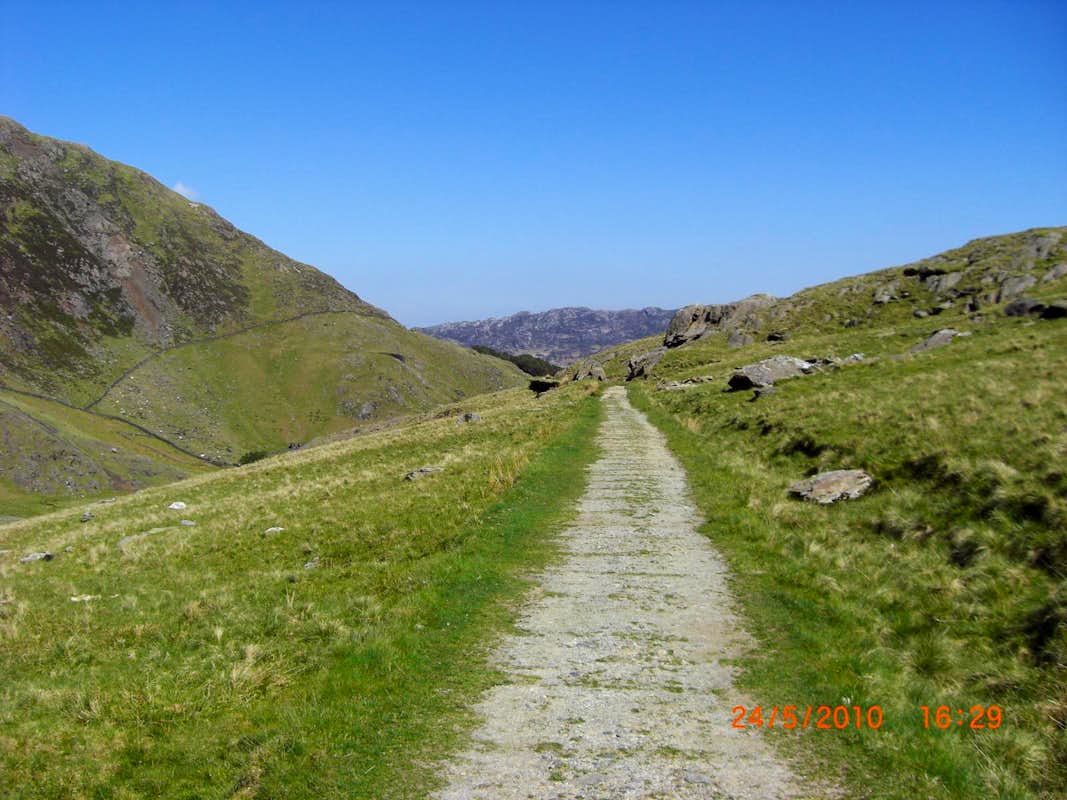 All in all, it was a most excellent day out and taking the longest route up Y Wyddfa with the greatest change in height we felt very satisfied that two OAPs could do the route in the standard time of about 6 hours.
Check it out yourselves next time you visit Snowdonia.

Source of the map for the area.

Nice one Jonnie, looks like a great day to have been out. Hope you don't mind me using some of your photos on the main Snowdon and Watkin Path pages.

thanks Dan,
feel free to use any you want to.
cheers Johnnie