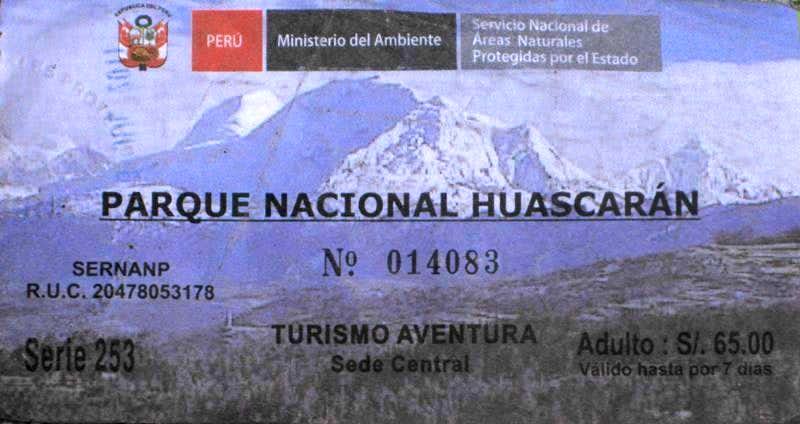 The 2011 ticket clearly says it's valid for 7 days. The start date is stamped on the back. After my first ticket had expired, I bought another one. In fact, I was going to spend quite some time in the area, so I figured I would have to keep buying a new ticket every week. At 65 Soles, that would come down to US$ 23. Then I met a well informed mountain guide who said that, even though the ticket says 7 days, it's valid for a month! Now that's strange, I thought, if that's the case, why does the official park office issue tickets saying otherwise? Anyway, after that, I only bought a new ticket when my old one was a month old. At the entrance of the more popular valleys, park officials check tickets (and climbing/trekking permits, which you need if you go climbing/trekking without a guide), and I never had a problem. Maybe it's going to be changed to 7 days in the future, but not yet in 2011. Or maybe it's just a printing error, and they want to save money by using them anyway. N.B. This image may look faint, but that's how the ticket looks. If you look closely, you may still be able to recognize Huascarán in the center, Huandoy on the left and Chopicalqui on the right.
« PREV NEXT »

Loading....
Huascarán: One for two, struggling with clouds and a learning experience - Four months in Peru, Part VIII(Trip Report)