I have been wanting to climb this mountain for a long time: Elbrus (5642m/18510ft) is located in Russia near the Georgian border. Geographically it is the highest in Europe and climbing it is organizationally more difficult than doing a technical climb in the Alps. I always wanted to do it on my own - without a guide - since it is technically not more difficult than for example Mt. Rainier . However, since we, my climbing partner Chris and I, do not speak Russian or read Cyrillic, we decided to pay a least a company to pick us up from the airport and drive us to the base camp.

Since getting to the Caucasus requires a layover in Moscow, we decided to stay there for a few days. We booked our flights with Aeroflot, the former state-owned monopolist. I was afraid of having to fly in old soviet-built airplanes but fortunately they had replaced their fleet with newer Boeing aircraft. 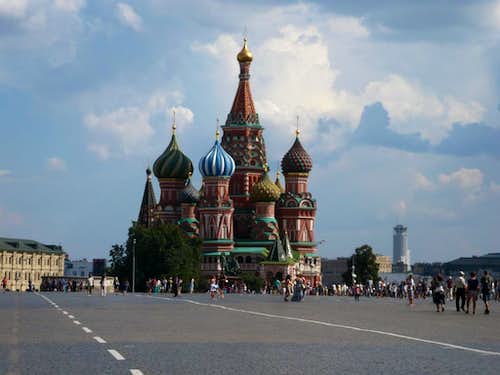 Saint Basil's Cathedral
Moscow's cleanliness reminded me of Munich but I am pretty sure this is limited to the areas tourists go. There were no homeless people or other signs of poverty. Tourists were numerous (so many French people...). Women were extremely well dressed compared to other big cities. Post-cards were not sold. Prices were comparable to other European cities, which was surprising since Russia's GDP per capita is only halve that of Germany. This must mean than the average Russian person cannot afford to have lunch downtown Moscow. Despite many things being transcribed in to the Roman alphabet and people knowing some English, I got lost more often than in other big cities. It happened several times that I got onto the metro (which is awesome by the way) and realized having misread two Cyrillic letters and therefore going the wrong way.

Other cool things to do in Moscow: the red square, the river, the churches, the Kremlin, and soviet-era architecture

Two hour flight from Moscow lays Mineralny Vody, a city at the foot of the Caucasus, where we were picked up and brought to Kislovodosk, a not un-touristic city "famous" for its mineral waters. Upon arrival we spent two hours searching for a store that would sell white gas for a camping stove, in the end settling for gasoline manually filled up into plastic bottles (turns out 3 liters is too much for 8 days). 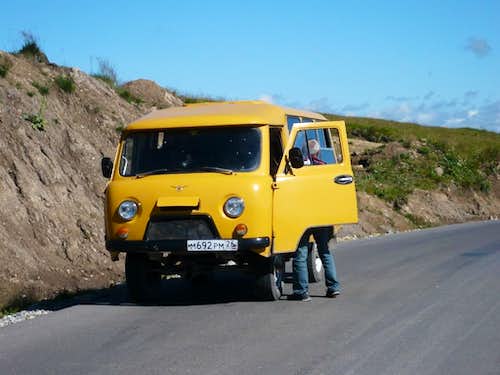 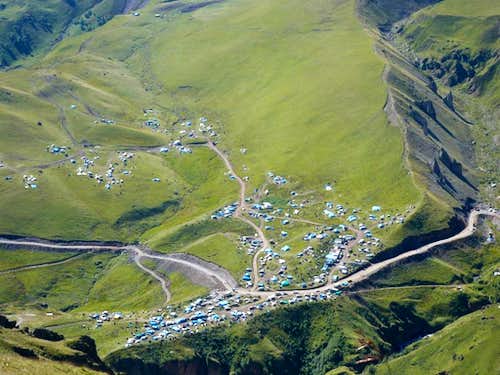 View from car
The next day we were transported 60km to the base camp (3-4h). This was probably the most dangerous part of our trip. After leaving pavement, we followed a gravel road traversing a steep mountainside. For (felt) hours we rocked forward on this road with the prospect of falling down hundreds of meters in case of a tipped vehicle. The base camp itself was a surprise. We had decided to do the mountain from the north side, because the south side has the easier standard route and big crowds of guided tourists. The north side, so I had read, would be empty, isolated, and hard to get to. In reality, 45 min hike from the base camp there is a huge tent city of Russians attending to to mineral water springs, one too crowded to get into and one too cold to get into. At the base camp itself were two compounds fenced by guiding companies and plenty of people (not all climbing Elbrus though). While it never was annoyingly crowded, I had imagined something different.


The first day we did an acclimatization hike to the high camp. On the way we passed the so called aerodrom, a flat field where German aircraft landed during WWII (not sure whether that is true), and mushroom shaped rocks, where I flashed some boulder problems (V3?). As nearly every evening to come, there were thunder, lightening, and rain. The next day we moved all our stuff to high camp, a stretch of rock above the glacier covered by surprisingly many tents. On the hike itself, we did not meet any more non-Russians except on two guided tours. Often people did not speak English so our conversations were limited to "хороший день". 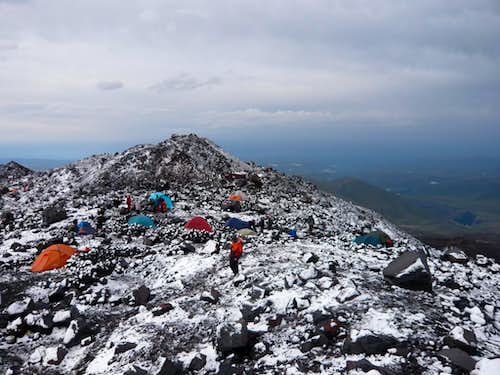 The third day we did an acclimatization hike to the so called Lenz Rocks. We turned around at around 4810m (this is consciously the height of Mont Blanc :-)). Up so far we did not spot any area which would have necessitated to use a rope. It would turn out that we brought all our safety equipment "in vain". In the evening I talked to an American expedition (guided), which was nice. Later I looked up how much they payed: $5100 excluding flight - compare to €1100 including flight for me. The fourth day was a rest day - boring of course. During the whole of the trip I read 4 books on my e-reader (E-reader have to be added as essential equipment to maintain mental health during travel).

The fifth day was summit day. Since the trip has 1900m (6200ft.) elevation gain and glaciers in sun are hot nightmares, we started at 1.30 in the morning. We proceeded fast up to the Lenz Rocks passing around 10 people on the way to the East summit (nobody was on our route this day). Beginning with the traverse at 4900m,  I started noticing the height. Everything became much more exhausting. At the the saddle we joined the more crowded South route. Somebody had installed fixed ropes on the steep slope. A person coming down fell several meters into the ropes, whereupon I realized that sticking close the the rope means endangering oneself by inexperienced climbers. When we arrived at the summit I felt extremely happy, nearly euphoric, but the predominant desire was getting down and breathing some thicker air. We descended fast and arrived at the high camp for lunch. Despite the exhaustion the summit had proven to be easier than thought. Navigation was not an issue and crevasses nearly absent. Rope, harness, and pickets remained unused. 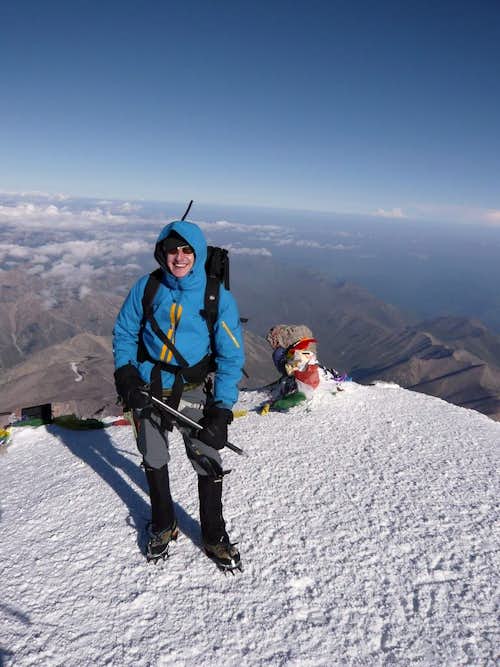 On the sixth day, we arrived back at the base camp, leaving us one day of wait there (extra bad weather day). When the guided group, we had been transported with, arrived  we learned that only two had made it to the summit, the rest suffering from altitude sickness. Also, the Russian guide had not been very forthcoming with information meaning that we had not missed anything. After we learned about their safety procedures (roping up in 3m distance etc.) we were double glad and proud that we did it on our own.  If you know your stuff, I can only advise against a guided tour although they are very useful for logistics. Even the ostensible disadvantage of eating boring oatmeal every morning was not that bad compared to other people going hungry.

The drive back was scary as hell (and of course a few hours delayed). Our hotel was so far away from downtown that we had to rely on the service of a drunk cab driver to go downtown. Thanks to two Russian guys from the guided group, we were able to order some good regional food without having to point randomly at non-readable words. The service, again, was incredible bad: The server was angry at us because we did not press the "service" button on the table, which of course was not working... In the end, the only thing that "really" went wrong was my luggage arriving three days after me.

http://www.rmiguides.com/mt-elbrus-northside/ (their Blog is also helpful)