NORTH BEND, Wash. -- Jim Sheehan of Seattle sprinted into the lead with just under a mile remaining to claim top honors at Sunday's 2016 Si of Relief Climb for Time competitive ascent of Mount Si near North Bend. 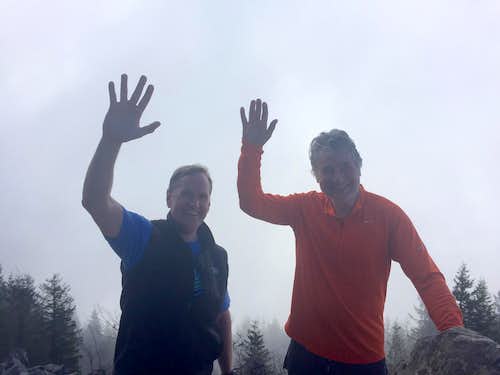 Mike McQuaid, a Seattle runner with the Washington Athletic Club, led for the majority of the race before falling back in the sharp ascent of the last half-mile. McQuaid finished second overall and first in the 50-year-old plus age category with a time of 1:06.40. He was just 4 minutes, 30 seconds behind the winner.

In Sheehan’s second competitive ascent of the popular massif’s switch-back trail east of Seattle, the Washington Athletic Club runner overcame his second-place finish from the 2015 climb with a burst of speed just before a hairpin turn at the three-and-a-half-mile mark and its sharp upward ascent to the talus slope at the fog -enshrouded finish line near the approach to Haystack Basin.

“The lead runners were climbing much stronger this year.” said Sheehan who used the aggressive pace and disappointment over last year's finish as motivation to better his time over the 2015 event by 11 seconds. “That second-place finish a year ago has been gnawing at me for quite a while. I really wanted this one,” he said.

Runners from throughout the Puget Sound region competed in the annual trail running competition for time.