After a couple of years basing our annual trip in the UK, Ken and I decided to return to Benasque for our 2018 trip. Ken came down to our house on Sunday as we were flying out from my local airport at Southend on Sea to El Prat in Barcelona.

Our flight was scheduled for around 1:00 pm and with the hour lost across the time zone we arrived a bit later than most of our previous trips. Ken had arranged a “swipe and go” car with Gold Car but when we found the office with the machine in the car park the computer said no!  It was out of order and the attendant said we would have to go back into the terminal to get our contract sorted. Not an auspicious start to our trip. Ken left me with our luggage and trudged back to the terminal where he had a bit of an argument with the staff when they wanted to see my license to log a second driver. Ken with his innate executive persona soon kicked that idea into touch.

Anyway, we had decided to drive through the night and arrive in Benasque early morning. We headed west on the A2 Autopista and around midnight arrived at Lerida (Lleida). We found ourselves a lively 24/7 garage/restaurant/bar and headed in for a coffee which we enjoyed surrounded by a coachload of Japanese tourists.

Heading north from Lerida we were on a familiar route so navigation was not an issue. Passing through Barbastro and Graus we saw few other travellers so we had a smooth run, a Badger and two Foxes crossing the road provided our only excitement.

Arriving in Banasque at 2:00 am we got our heads down for a doze until later and then we headed for the Hotel Ciria and a nourishing breakfast. Fully reinforced we drove up the valley to Camping Aneto. We were assigned our familiar old room in their refugio and soon settled in. We were glad to find that the kitchen area had been fully refurbished since our last visit and was complete with a new electric stove and a full range of cutlery and cooking utensils. Although there was a slight increase in the overnight charge to €19 it was still very reasonable.

After breakfast we agreed that our first day on the hills would be to traverse the ridge above the Ski resort of Ampriu which was beyond Cerler, a small village above the town of Benasque, theoretically we thought it an easy day to warm up. A couple of days before, this had been the last stage of the ‘Vuelta a Aragón’ a professional cycle tour and the evidence was all around for as usual the fans had liberally painted the names of their cycling heroes on the tarmac road. 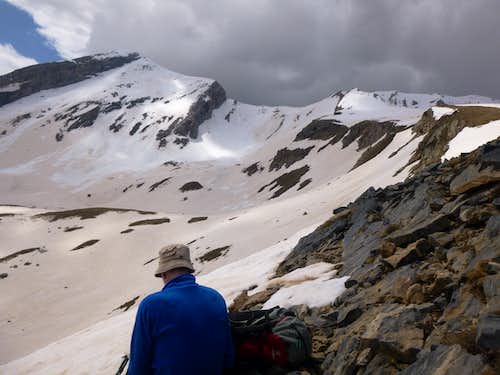 We take a five minute rest.

As we rose closer to the crest of the ridge, we noticed that the angle of the snow steepened much more and conscious of the risk of avalanche we looked for the safest line of approach. To our right hand side above we noticed a rib of bare rock and using this seemed to be a potential way of avoiding the steepest section of the snow. It was a tricky move to gain the rocky section but we soon made it and took another short rest. 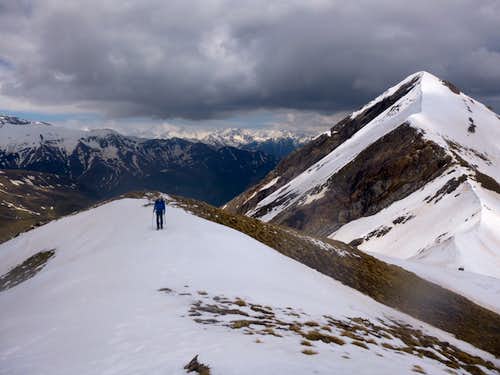 Ken reaches the top of the ridge.

Once up into the Besurta we needed to discuss a possible route for the day.

During our many visits to this beautiful National Park, we had climbed many of the peaks on both sides of the valley and I had a desire to complete our explorations by climbing one that had eluded us so far. This unusual mountain is the twin peaked Forcanada or Mahl des Pois. We had been close to it on a previous visit when we ascended to the Col D’Alfred but then we turned south to climb the Tuc de Molieres. 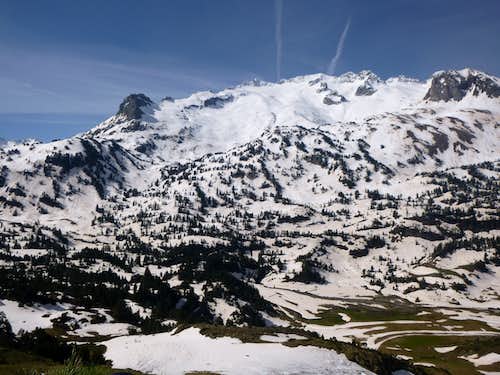 As we looked around we saw that an ascent of Forcanada in these snow conditions would be beyond our reach, not so much for the ascending but to travel down on soft snow for a much longer duration would require snow shoes to do it in a practical amount of time and we were not blessed with a long enough vacation for that or any snow shoes. We looked around the surrounding peaks and searched for some new ground that we could explore that day. As I said we had topped out on most of the peaks and crossed some of the cols too. After perusing our map, we decided to head for the Port dera Picada (2477 metres) which was an area that we had not previously visited.

The col there is close to the border with France but also being across the valley from the Maladeta promised to give some fine views of the highest peaks in the area.

So we carried on down the trail through La Besurta to pick up the path leading to our chosen route and watched the Marmots scampering across the snow and diving into their burrows. The path was rising up the hill just as we passed the small refugio hut of the Plan d’Estan.

As we approached the col, the angle of the snow increased considerably and so our progress slowed down but we kept going steadily upwards.

At last we reached the top of the col and crashed down for a rest in the snow just after 12 noon. After a short breather we unpacked our sandwiches and drinks for a restorative lunch break. We stayed around a half hour enjoying the pleasant day and the brilliant views all around.

Eventually we had to head back and on the way back down, we had time and breath to notice the flattened trees below the trail that had resulted from previous avalanches and some lovely spring flowers bursting out of the rocky ground.

A fine day dawned and after breakfasting and making sandwiches for lunch we crossed behind the Refugio at 9:00 am and headed up the GR11 trail into the Estos valley. This is our favourite walk up to the Estos Refugio.

After the lower wooded section, the valley opens out and we got our first sight of one of our previous mountains. High above to the north of the trail was the imposing massif of the Pico Perdiguero. We had climbed this after an overnight stay at the Estos refugio in 2008 but then, the top of the mountain was in total whiteout, so our view of the precipitous eastern flank was invisible.

We had carefully ascended the final few hundred metres and after Ken had viewed a video of the same ascent later he realised that we had been quite close to the corniced edge.

This year we saw that the summit was reasonably clear of cloud and would have allowed excellent views of Posets to the south. Unfortunately we didn’t have that pleasure in 2008.

We had previously climbed Posets in 2006 after an initial recce and so at least we were able to have seen Perdiguero from there.

The GR11 trail through the Estos valley has excellent signage arranged by the National Park authorities giving all the trekkers a good guide to likely times between points of interest. Red and White markers indicate the GR11 path. Thermometer type signs also indicate your progress along the trail. 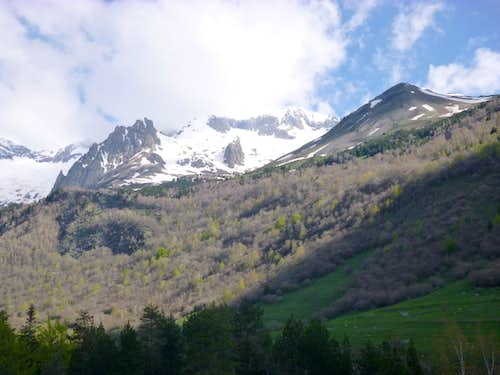 Perdiguero towers above the GR11 Trail. 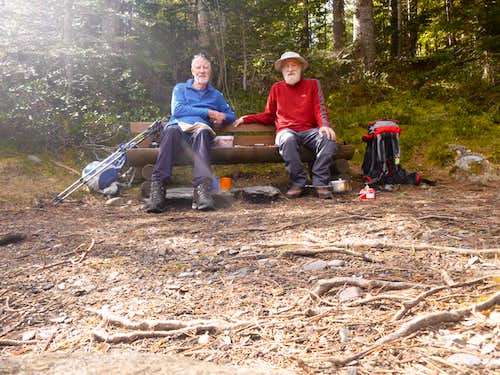 We reprise an earlier year's photograph at the Palanca de Batisielles.

As we neared the refugio we saw that the path was completely blocked by the remains of an earlier avalanche. A tangles mass of snow and broken trees provided an awkward obstacle to be passed but over or around it we soon went and arrived at the refugio at about 12:30pm a steady 31/2 hours after leaving our own refugio.

We said 'hola' to the guardian, bought a couple of beers to wash down our sandwiches and relaxed on the patio enjoying the midday sunshine. 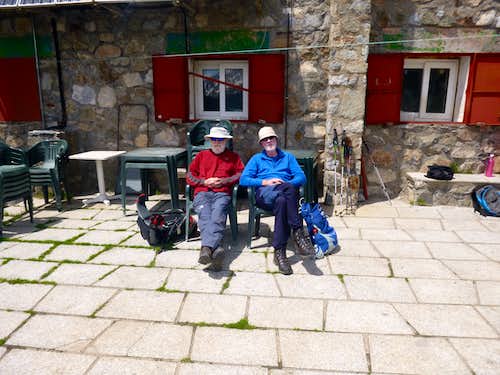 Outside the excellent Estos refugio.

We had seen quite a selection of wildlife on our walk, including the ubiquitous Marmots, Rebecco on the higher slopes and a Lammergier sailing high overhead.

Setting off back we tackled the avalanche debris head on and soon walked back to the Palanca de Batisielles. 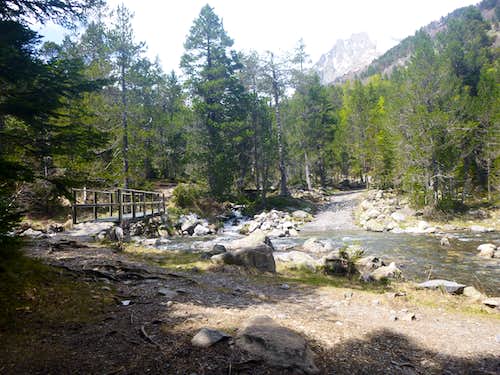 Day 5 – May 19th – The Estos valley and the Ibóns de Batisielles.

For our last day in Benasque we decided to return to the Estos valley and explore the plateau above the GR11 trail where the Ibón Gran de Batisielles is situated. 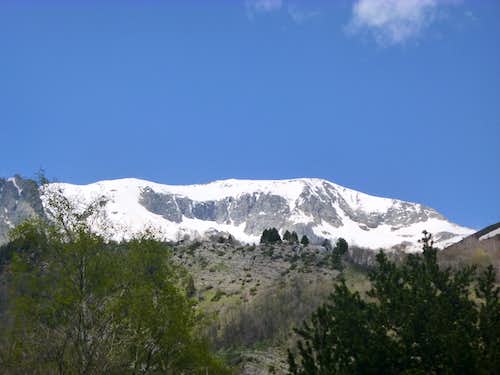 Reluctantly we left the peaceful side of the beautiful small ibón and headed off across boggy ground to the forested slopes. 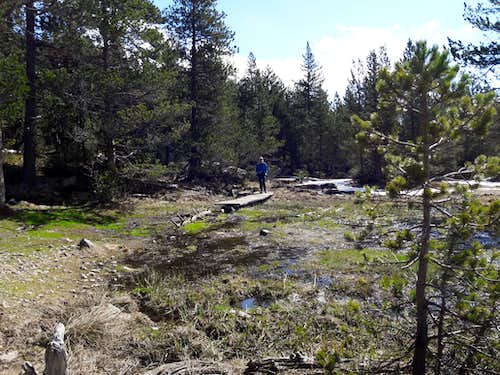 A rustic boardwalk crosses an area of boggy ground.

Before too long we had arrived at the upper ibón and were amazed at the sheer panorama of peaks surrounding it on all three sides.

We found ourselves a grassy knoll just above the frozen ibón with a flat spot suitable for our bivvy stove and started setting up our gear to boil water for a brew. Ken had his GPS device with him and was trying to rationalise our position with it and the Editorial Alpina map. We drank our respective teas, ate our lunch sandwiches and marvelled at the impressive ridges above. These would make a fine Alpine type expedition some day. The grassy knoll would make a fine spot for an overnight stay.

Generally campingt is not allowed in the National Park but if you bed down late in the evening and clear away early in the morning you should have no troubles with the park wardens. (just don't park you car in the wrong place !!) 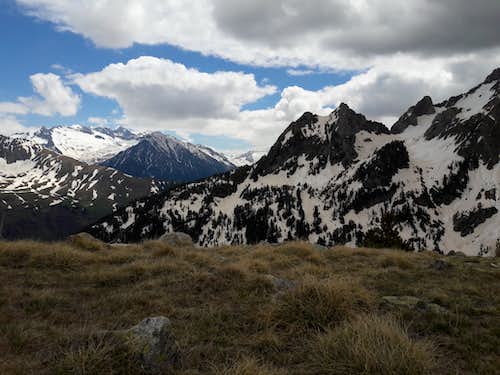 Fine views from our grassy knoll, looking  North towards the French border.

Sadly we returned to our refugio as this was our last day on the hills. Tomorrow we had to travel back to Barcelona to fly home.

After a nourishing breakfast in Benasque we drove back to Barcelona with a short stop at the café we called into on our outward journey.

We struggled get a parking spot near the café as there was a street market on and the surrounding area was rammed. As is traditional with our visits to the Barcelona area we decided to stop off in Sitjes for a lunch break of tapas and cerveza before we had to return our hire car and check in at EasyJet desk.