An amazing lookout, worth the visit

As I look back in the rear view mirror of my climbing and hiking life, I'm now 76, this hike/climb was one of the top ten for adventure. Right up there with my climbs of Mt. Rainier, solo of Mt. Hood, dayhike of Mt. Whitney and racing a storm on the top of Mt. Shasta. I was 67 when I did this hike and so age doesn't need to be an excuse from NOT doing this one if you want to. The sheer beauty of the area and the incredible location for a lookout can never be forgotten. If I ever get alheizmers, I will not forget this one. I hope you enjoy my trip report.
Read on:

On Friday,myself & fellow SP members Eric Noel, Bob Bolton and Duane Guilland met at the TH for 3 Fingers. Most of us got minimal sleep so when we hit the trail we looked like zombies. However, the need to pay attention to where one needs to put their feet on the first 5 miles to Goat Flats soon made us alert otherwise you'd trip on a root or go into an endless supply of mud. One or two glimpses of where we were going added fuel to our energy so the five miles seemed to go by fairly quickly. 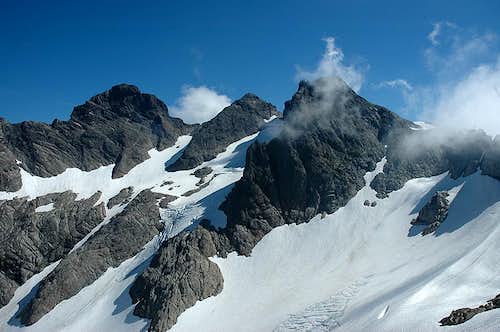 Eric Noels pic of the 3 Fingers
The good stuff starts above Goat Flats and the trail gets so scenic from that point on. Views opened to Mt. Baker to the north and Mt. Pilchuck and Mt. Rainier to the south. Also we got some good looks at 3 Fingers as well and that alone was worth the hike to this point. Two rangers were met just before the flats and one of them had some lopping shears to cut back the brush on the trail when they encountered it. Thanks guys for working on the trail, it needed all the brushing out it could get as the brush was very generous in sharing its moisture with me on the way up.

We met a couple at Goat Flats from Seattle and the gal had a big bandage on her head from nailing herself on one of the spikes that hold the ladders to place on the ladder route up to the lookout. She warned us to watch out for all the blood she left up there and assured us that no one was murdered. We later found her statements to be true and were amazed that she didn't fall off the ladder when she about knocked herself out on the metal rod she hit with her head. OUCH !! 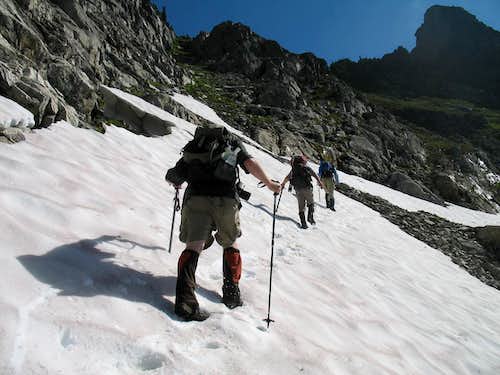 Crossing a snowfield on the way to Tin Can Gap
Along the two miles of trail to Tin Can Gap, we had a couple snowfields to cross but those were easy enough. The crux of the whole climb (or hike if you prefer) came just after Tin Can Gap where you encounter a shoulder of the Queest Alb Glacier. The trail is still buried at this point and the choice to cross it or take a rough route through a narrow moat where the glacier is separated from the rock needed to be dealt with. Two of us elected to cross the steep snow and two of us chose the moat. Even though I had an ice axe, I elected to do the moat. I had new boots on and still wasn't confident in my sure footedness on that one area where a slip could send you to the promised land. Think what you want, I wussed out but the moat was not easy either but it was safer. Had the moat not been there, I would have done the "airy footpath" as I called it but since there was a choice, I opted for the moat. 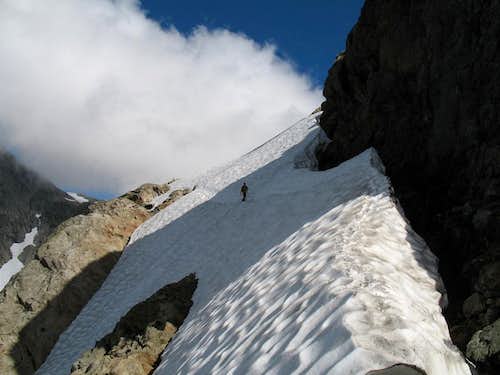 The airy Traverse
Eric and Bob were the two who walked across the snowslope while Duane and I challenged the moat, hoping it would go through to the other side, which fortunately it did. Some class three rock moves were necessary in the moat and the worst part was the rock was wet. Oh well, it was my choice and yet I found it kind of fun. 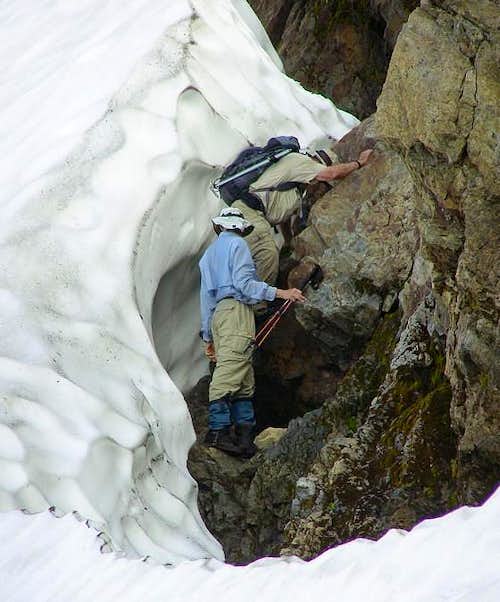 Negotiating the moat
After the snow crossing (upper reach of the glacier actually), the trail became a real delight and I thoroughly enjoyed it as it wended its way behind snow banks, down another moat that had a rope hanging part way down it and across some spots where drops offs were on both sides to give a true high alpine feeling. Several snow fields remained to be crossed but none were a problem. Without giving a step by step description, suffice it to say that the trail to 3 fingers is one of the best I've been on, thanks to the years of hikers feet and good trail construction. 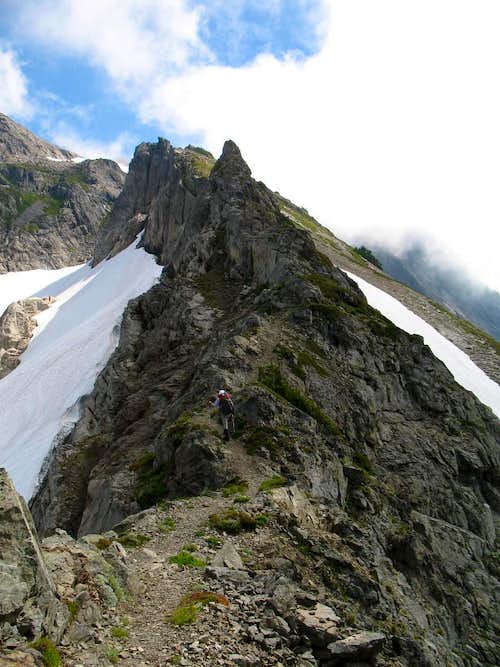 Loved the trail
All the while, we kept looking up at 3 Fingers and the lookout, marveling that they could put such a structure up there. In time, we found ourselves at the base of a large snowfield and just above it was what we were looking for, the lookout itself. After ascending the snowfield, a bit of class three scrambling, very easy at that, led to the west side and an airy spot of trail leading to the base of the ladders. I had been looking forward to going up those ladders for years and now, right in front of me were the fabled three wooden ladders. Eric didn't even hesitate, he just went for it and soon was making his way up the ladders. 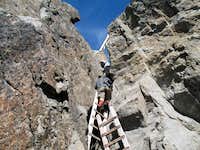 Going up the ladders
The top ladder made him think a bit but he avoided hitting his head on the metal rods and soon he and Bob were up and waiting for Duane and myself. I went next and snapping pictures every chance I got, I soon found myself grabbing onto the rope that allows easy access at the top of the 3rd ladder. 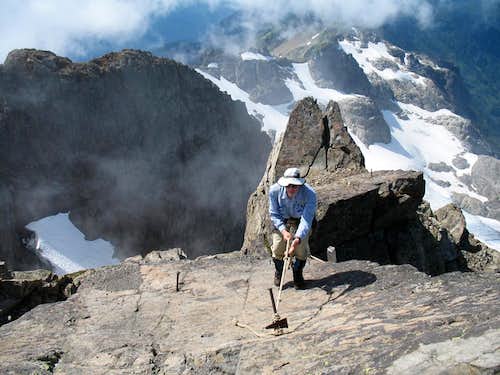 The helpful rope at the top of the ladders
Duane dispatched the ladders in fine style and soon the four of us were inside the lookout (shutters were all down) finding the "backdoor" to get to the actual highest spot on the peak itself. A small step ladder is builtinto the inside and outside of one of the windows, allowing easy access to this spot of rock that would make an Eagle jealous. Views down to the glacier and the north face were breathtaking but unfortunately clouds had moved in blocking the views of the surrounding mountains we had hoped for. 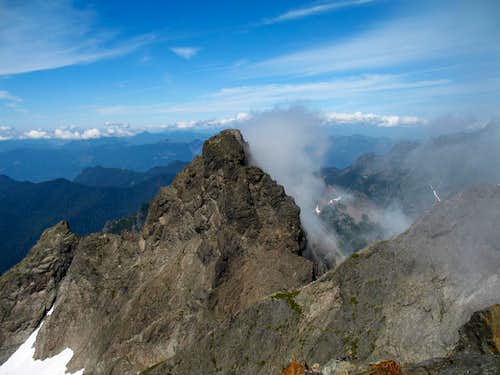 North Peak of 3 Fingers
Some snacks were consumed for the energy we would need for our return back to our vehicles and I called my wife (a tradition I have) to share the summit with her. What a fantastic spot. At night the lights of the sound make the lookout a stellar spot to be and perhaps some day
I'll be able to get back and spend a night in this lookout, perhaps.

Looking down
All too soon we had to turn around and go down but as we hit the ladders for our return, we encountered what appeared to be a father and son combo waiting to come up. We left the lookout to their good keeping and
made our way back the way we came. The crossing the glacier traverse was still intimidating to me so I used the moat again while the other three members of my party took the faster way. Bob kicked in some bomber
footsteps but understand that I was having trouble with my boots. My previous boots had died and unfortunately I had to break in a new pair on this trip and that really proved what my wife has known all along, that I'm not too smart. 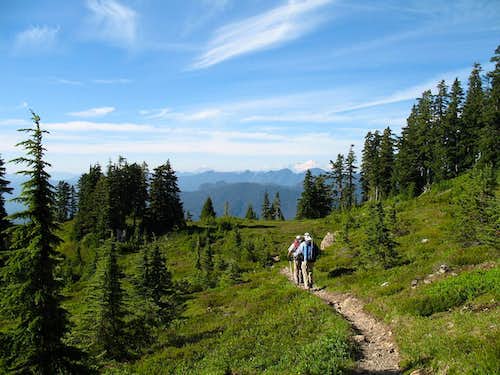 Hiking out
As I came out of the moat, it was now 4 pm and we met a party of three hikers heading for the lookout. Two of the three had no snow experience while one did and he talked them into going across that traverse. They had one ice axe between them and only one knew how to use it. The problem on the traverse is if you slip, you die. I know that sounds dramatic, but it is true. That was no place to be if you didn't have an ice axe and the skills to self arrest. The other problem I could see is that they had no other real gear and were not going to be staying in the lookout, meaning they would have to re cross the traverse when it was
icier. Not good. As it was, Bob, Duane and I could not bear to watch the novice pair go across. They had opted to go via the moat but the "experienced" hiker / climber felt they didn't have the time to do the moat so he convinced them to do the traverse as I mentioned earlier.

By the time I hit Goat Flats, my left foot was blistering up and some blister management was applied to the affected areas. I was hobbling by the time I got to the TH but the thought of a good Mexican dinner in Granite Falls made the pain go away. It was a great hike and one I'd do again. Hopefully that sketchy traverse should be melted out adequately in another couple of weeks or so. If not, the moat should be easier if you don't want to take an ice axe along. If you get the chance to do 3 fingers, do it. Those of you who have done it, I'm not telling you anything new.

For those who might be geocachers, this one has the most worthwhile geocache to find that you will ever go after, combined with a hike and climb to the summit of this amazing mountain. For more information, go to geocache.com and lookup GCKB5G. I don't want to give anything away but I notice that the log page now has a spoiler pic and I'd suggest that you be sure to look at it. Also, be sure to sign the log and give the cache a favorite point, it deserves it.

A very well written report. I'm sure it will make the front page. Thanks for putting the energy into writing it. It makes me anxious to get back up there. From what I've heard, to skip the technical spots of the route, late September to early October is best. I hope you get the chance to experience a night in the lookout and a sunrise from the summit. I'm going back myself in a few weeks.

Re: Great One Dean!

Thank you for the nice words. I'd say in about two more weeks that not much technical will remain. Actually only the airy traverse was
a concern, everything else was pretty straightforward and enjoyable. I'd love to take my son up there, maybe even next year.
I'll be interested in hearing how your next trip up there goes. Again, thanks for taking the time to comment.