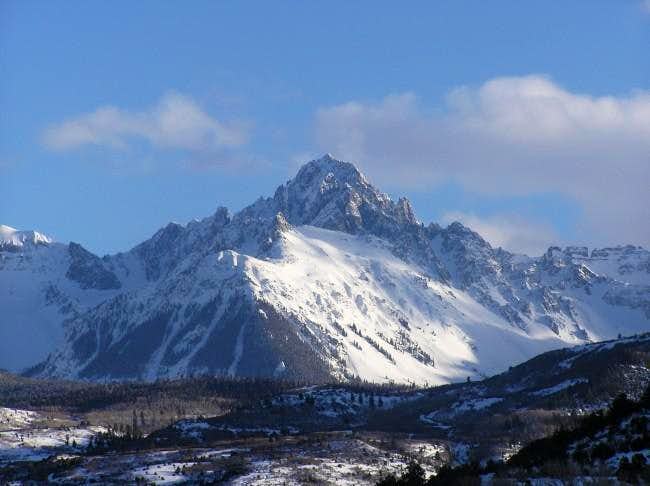 Ah, now I see why Sneffels evokes the apocalyptic. This is a nice photo.

Gentlemen. I have already had some communications with the photographer. His work really spiced up my pages. I can assure you this picture is digital and it's the real thing. It's exceptional because the photographer likely has an exceptional digital camera. You can see more of his work on the Wilson Peak and Lizard Head pages. He also happened to have great light, which is everything in a great picture.

I'm not surprised that AZclimbingboy would react the way he did. Digital photos are getting better all the time and often surpass slide film. Given the world of the internet, you must suspect just about everything you see. I am fooled routinely. When I first saw some digital stuff at SP, I was truly impressed and coud not believe the clarity. To have such quality at such little effort sold me on the idea and I made the switch this year shortly after Chistmas. Sometimes digital photos just look unreal...hell...they look surreal! Way beyond believability. Expect to see more of it.

Lastly, if there was ever any doubt that this picture was real, I can assure you, THAT is really Mount Sneffels. I lived there. I've climbed the mountain 8 times, and driven by it more times than years you guys have been alive! I have many pictures of this, my favorite mountain of all time, from the very same angle. I know this view like I know my own...well, I won't go there.

It's the real deal.

Given the photographer's handle I am surprised this exchange started on March 17 instead of on the Ides of March but then you gotta do something for St. Patricks Day!

Well, I've missed the last several days of this exchange as I've been on a trip to the northwest (unfortunately not mountaineering related) and am quite surprised both at the ignorance of the claim and the number of hits it has generated! I find it to be an insult to my integrity and I can assure you that all the photos I've posted on this site were taken by me. Most surprising of all is this is probably the easiest view of Mt. Sneffels to see - just drive on Hwy 62 and you can't miss it. I do appreciate everyone else's comments that are positive in nature and as long as people want to look at my pictures and maybe dream about climbing or even just seeing the beautiful places I've been, then I'm wiling to share them.

"looks like a computer generated image. sorry i can't explain it any better than that. "

"thgis is a fake. hell, just compare it to all the other photos on this page. it looks totally different. (...meaning fake)"

"look at the foreground, those "trees" are as fake as fake can be. if you can't see that, then i recommend an eye exam." x2

Maybe you should get a clue. Or maybe learn how to not open your mouth until you know what you are talking about. Or maybe you should stop posting until you can act something more than twelve years old... And when you are called on your obvious mistake you should just say "sorry" instead of insulting everyone.

No the manner in which you have appoached the subject and responded to those who have pointed out that you are wrong makes you appear juvenile. Now that you are calling me a "whiney little bitch" makes me see that you really are a twelve year old.

BTW you started eating crow a while ago.

P.S. How old are you really?

I'm surprised at how this has continued, although I think I owe you a thank you for the interest this has generated. I think if you compare this picture to Aaron Johnson's second page picture posted on Dec 09, 2003 you cannot help but think we took them from very near the same position. Perhaps before making such a claim you should've looked at my other photos and noticed the similar conditions of that day. I should think that digitally rendering a picture with that detail would be a major pain in the ass when all's that one has to do is drive on a highway to see it. I've taken all the pictures that I've posted, including the signature photo on my user page of me at the Sunshine Pk summit - incidentally, I'm glad I didn't post a trip report of that debacle as that would likely be considered "fake" as well. If anyone cares to see all the photos I've taken, I can send a link to my ofoto.com albums which should dispel any further claims of fraud.

Sure you did. Your posts were very blunt on what you thought of it. Unless, of course, you were very inept and clumsy in your choice of words. Noting on how often you choose to insult those who criticized your posts maybe you really did make a very unfortunate and unintentional assault on another members photo.

Perhaps not the best way to make friends.

What did I miss? AZ seems to have gone bye bye.

I think he wisely realized that he was wrong and removed his comments.