The name says it all;  Rachael was 7 months pregnant and decided she and I were to go snowshoeing for her first time on her Birthday.  For several weeks prior to our annual High Peaks Birthday trip, I decided to do some research and plan a "not so strenuous" snowshoe trip for us.  I didn't want to sacrifice views or beauty for ease, nor did I want to do anything that could jeopardize her pregnancy in any way.  After many hours pouring over trail maps and reading trail and weather reports, I settled on a beautiful hike to Raquette Falls in the Seward Range.  It didn't have veiws from 4500 feet, but it had beauty, good distance, and was in a Range that for some reason as peaked my interest for quite some time now.  However, as is so happens with us frequently, the trip had plans of its own, and we are always willing to accomodate change....

Driving up to the Adirondacks, I decided to take a different route from our usual trek East on Rte 3; this time I was going to head up NYS 28 from the south and show Rachael a part of my childhood, Old Forge.  I was ecstatic to show her the Pancake House, where we had a great breakfast, the Hardware Store in the center of town, the center of town itself, Water Safari.  I was even more excited to see white out conditions with snow mobiles whizzing around us.  Immediately I knew we needed to make an ascent of the simple but elegant Bald Mountain.  Climbing Bald Mountain is probably the fondest childhood memory I have of the Adirondacks;  my father, mother and I running up the trail to have a picnic on the sun soaked rock.  Pretending I was young Alex Honnold, free climbing the small scrambling sections with bare feet.  Climbing the firetower at the summit to see the fireworks over the Fulton Chain on Independence Day, and then camping in the very run-down caretakers cabin after the Grand Finale.  These images will always be imprinted in my mind the way an image is etched on a printing block of a printing press, and now I can start the etching on my soon-to-be wifes mind, while we make new memories. 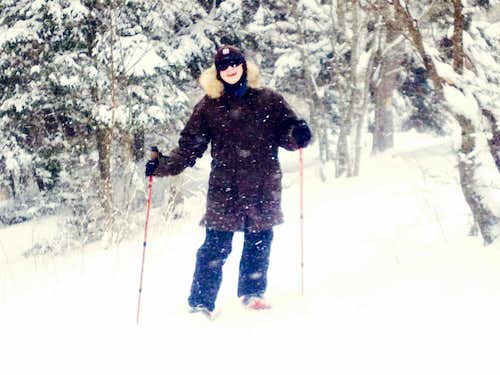 Rachael has always been open for new adventures, and with her Tubbs snowshoes, we were ready to embark on a trek up to the 2350' summit.  With only 500' of elevation gain over the course of a mile, it was perfect and still has an impressive view to rival any in the "grander" High Peaks.  Hopefully the weather would give us that view, because at the trailhead, it was nearly a white out blizzard, which is never a deterrent, especailly with the temperatures being so comfortably hovering around 16* F.  After helping her into her snowpants, and boots, I strapped on her snowshoes and told her we were ready to head up, not really sure what to expect.  Right from the start she loved it!   A huge grin spreading across her face lighting up the trail, her ample baby bump testing the zipper on her bibs, a truly beautiful sight surrounded by a beautiful setting.

The trail is showing signs that someone bare booted ita few days prior, but with the fresh falling snow accumulating quickly, the conditions couldn't be more perfect.  Racahel was warm in her oversized parka, and i was working up a small sweat with the quick pace up the trail.  There were more times than I could count that we just wandered around playing in the drifts and frolicking in the snow while we cooled ourselves down a bit.  As the trail steepened, the snow lining the trees became thicker, fueling our drive to go on and on and on forever, this force my mouth to spew out memories faster and faster and faster.  I am sure Rachael wished she could enjoy the muffled silence that only the winter snows can provide, but i couldn't resist.  It was amazing to see a trail I knew so well as a child, transform itself into Narnia, a world I could recognize nothing.  At the first overlook, the skies started clearing and I took a panoramic shot of the Fulton Chain of Lakes below with my iPhone while Rachael ate snow off the limbs of the pines and made snow angels in the fresh powder.  What a beautiful picture, and the skies....they are clearing and we are so close....so close I could hear the Beatles "Here Comes the Sun." 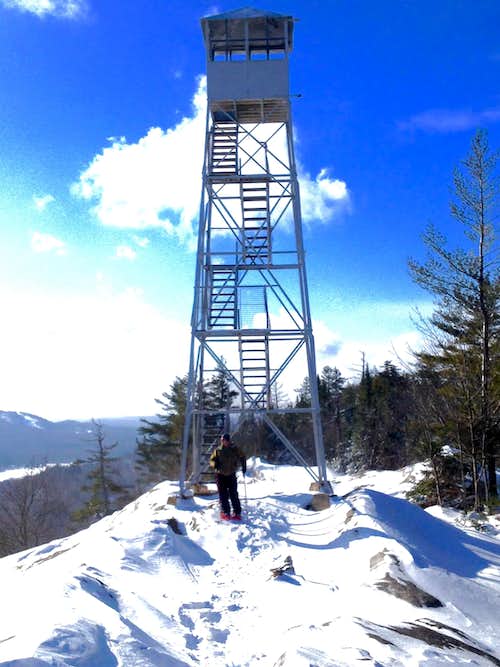 As the tree line started thinning, as much as a 2300' peak allows, so did the clouds, bringing the firetower into view with blue skies behind it.  The drifting snow at this point was incredible, as much as 8 and 9 foot drifts.  Racahels first firetower and snow shoe experience, was a perfectly executed success.  We stayed for about a half hour, playing in the snow, and just enjoying the incredible views.  I looked for the caretakers cabin I was so fond of, but found it has been completely removed.  We talked about climbing the tower, but I was lazy and didnt feel like removing my MSR Denalis with the extenders, nor did I feel like doing the same with Rachaels Tubbs.  So after we enjoyed the summit, we started down the trail, to find some of the trail we broke on the way up, had already blown back over with the wind.  One of my favorite parts of the down climb, which might be dangerous in other situtaions was awesome on this trek.  My snoeshoes are so big, with so much surface area, only the toe spikes and side rails, I could almost ski down the big steeper sections with ample snow drifts.  About half way down the trail, the skies covered themselves up, and unleashed another blizzard.  This was an absolute perfect day to start another wonderful ADK trip for us.