Mount Roraima - The Highest of All Tepuis

Tepuis in general are no ordinary mountain climbing! These table-top mountains are prominent features of the Guiana Shield and are almost completely unique to Venezuela.

Surrounded by massive vertical rock walls, from which flow some of the world's highest waterfalls, they have been attracting generations of adventurers. At the top, the plateau is a strange world made of bizarre rock formations, swamps, unique flora and fauna, and rivers of pure, drinkable water.

At 2800 m above sea level, Mount Roraima is the highest of these tepuis, and is split between 3 countries: Venezuela, Guyana and Brazil. The climbing route to the top is located on the Venezuelan side. And unless you are part of an extreme expedition including some very serious rock climbing, it is the only way to access the plateau at the top.

I took part in an 8-day trek, crossing parts of the Gran Sabana (the Great Savannah), climbing to the top, and exploring most of the top. I was lucky to not only discover the Venezuelan part, but also the Brazilian and the less visited Prow - the northern tip of the tepui belonging to Guyana.

Trekking Across the Gran Sabana

The Gran Sabana region, in the south-east of Venezuela, at great hilly plains covered with grass. In the dry season, fires occur all the time. It's an interesting landscape to hike across.

However, the real magnet is the silhouette of the Kukenan and Roraima tepuis in the horizon. Slowly they get closer. 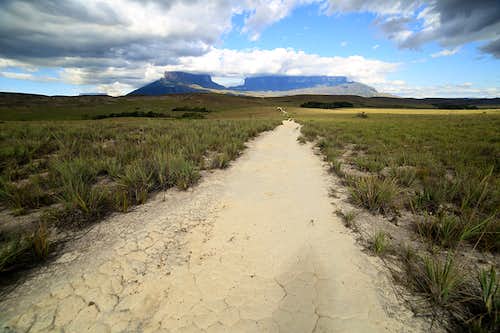 After crossing the Gran Sabana for 2 days, I finally reached base camp! The camp is located right at the foot of the giant, intimidating, vertical rock wall. From there, you can spot the natural corridor gradually climbing along the cliff, that is used to access the top. From base camp already, it looks pretty challenging.

On the other side, you have a full panoramic view above the savannahs and it's a wonderful view point when sunset time comes. After a good meal and some stargazing in one of the most unique places in the world, it was time to have a good night for the challenging climb the next day.

Climbing to The Top and Discovering The Venezuelan Part

The climb starts with an incredibly steep trail, that must be a real pain to climb when it rains! Luckily for me, it was sunny. At the foot of the cliff, you then have to cross a pretty but extremely humid palm tree forest.

Slowly, as you climb, it is getting more and more rocky, more humid. The view to the rock wall are truly mind-blowing and make you feel really, really tiny. The vegetation changes, too. Closer to the top, I started spotting the Roraima sundew (Drosera roraimae), an endemic species. I also spotted my first Roraima black frog, common on the mountain but also endemic.

The last slope to climb before the summit, among slippery boulders, felt really hard. There is a spot on the trail where light waterfalls are falling from the top directly on the trail. It is known as el Paseo de la Lagrimas (the Passage of Tears).

At the top, I laid eyes on this really myserious world, totaly isolated from the rest of the world, suspended above the clouds. It is a small little world of its own.

All these weirdly shaped rocks, pretty swamps looking like small Japanese gardens, crystal-clear lagoons... I was excited like a 5 year-old at Christmas. It is probably the most fascinating place I had the luck to explore.

Camps on top of Mount Roraima are set under overhanging rocks or caves, and they are called "hotels".

For sunset, we went to climb the Maverick Rock, which is the highest point of Mount Roraima. You can guess, the view was rewarding! 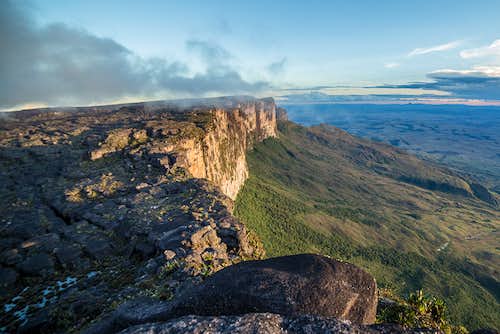 After a long hike, we reached the Brazilian part of the tepui, which is very small compared with the parts belonging to Venezuela and Guyana. Of course, we passed by the monument marking the spot where all 3 borders meet. So just by walking around it, you have been to 3 countries!

The campsite at this stage is really cool. It's a cave called the Coati cave, names after an elusive mammal that lives on top of Mount Roraima. I saw one for half a second, runnning away. And it's probably considered lucky already!

The Coati Cave is adjacent to a long, enclosed rocky crack that you can have fun exploring. It is my favorite campsite on the mountain.

The scenery in front of the cave is once again really strange, rocky and swampy at the same time. Feels like stepping on another planet, or maybe on Earth millions of years ago.

Not far from camp, you can reach the edge of the tepuy and see another much smaller tepui called Wei-Assipu. A wonderful way to end the day.

Now comes what is maybe the most exciting part of the trip! This is the reason why I absolutely wanted an 8-day trek. Most people visiting Mount Roraima go for a 6-day trek and don't get to see this part.

So we will be exploring the northern tip of Mount Roraima, called La Proa (The Prow), surrounded by the virgin rainforests of Guyana. Almost at the tip, the goal of the hike is the Lago Gladys (Gladys Lake).

It is a really beautiful area of the top plateau. We were following a river, among super colorful shrubs (also endemic), then walked along the edge of the cliff, catching a glimpse of the jungle below. We then headed more towards the interior until we reached the lake. You can see amazing virtual tours of the trek to Mount Roraima and more photos.

Gladys Lake is quite large and impressive, and it is at the bottom of a large depression. At this point, we were englulfed in the clouds at times, and the landscape around was totally lunar, made of barren grey rock, with patches of plants here and there. I tried hiking around the lake a little but the rocks were particularly slippery.

The trail back to Venezuela passed by the Crystal Valley, a reknowned spot at the top of Mount Roraima. And indeed, it's quite amazing because you litteraly step on a "gravel" made of crystals! Larger crystals can also be found on the rocks nearby. It is strictly forbidden to take any crystal from Mount Roraima. 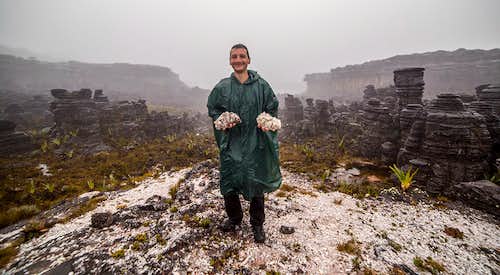 Of course, all of this is just a summary and there is so much to be shared from such an adventure. Mount Roraima is a true marvel of this world, but also a fragile one and it is important to respect it, by not taking crystals, avoid stepping on the plants, etc. Most of what you see at the top - plants and animals - do not exist anywhere else on the planet.

And for sure there is no other trek like this one on the planet either!