The aim for New Year's Day of '21 had originally been to reach the south summit of Mt. Jefferson, the highest point in Central Nevada's Nye County, from the east via Monitor Valley, but alas, the snow looked like it'd be too much. Though I'd reached the north summit a month prior, the south summit would remain elusive for now. In the meantime, though Wildcat Peak was on my radar, a seemingly unnamed peak just southeast of Mt. Jefferson and northeast of Little Table Mountain caught my attention in earnest. Said peak is to the left in below photo.

The morning began with a drive into Monitor Valley via NV-377, which I'd reached by catching a few Zees in the rest area in Carvers.

Prior to the turn on NV-377 though, I stopped to take some pictures of the south end of the Toiyabe Range to the immediate west, immediately opposite the turn onto NV-377.

Then, after a while on pavement, I reached a well maintained dirt road, which passed through the tiny town of Manhattan. Continuing eastward, I entered Monitor Valley. Low-laying fog made for a mysterious sight. The temperature was 5-deg F, according to my vehicle's readings. 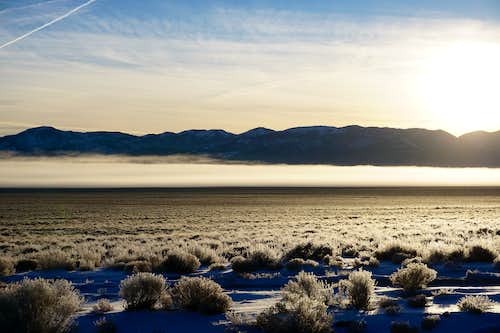 After turning left and heading north on NV-82, I passed through the historic ghost town of Belmont, where I caught a glimpse of the famous Belmont courthouse. 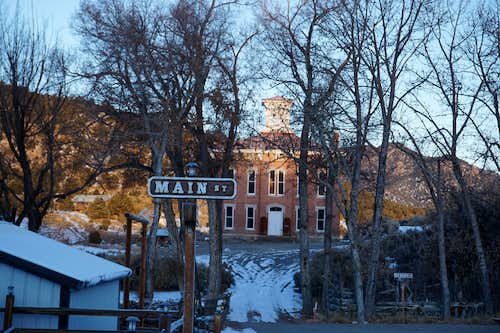 Not far north of Belmont were an array of smaller dirt roads that led toward each side of the valley. I first chose a bigger, more established one, finding a perhaps 100-year-old-or-more "Stone House Ranch" just east of the entrance to Corcoran Canyon, which seemed to be a narrow-yet-vehicle-friendly path ending just to the northeast of Little Table Mountain. 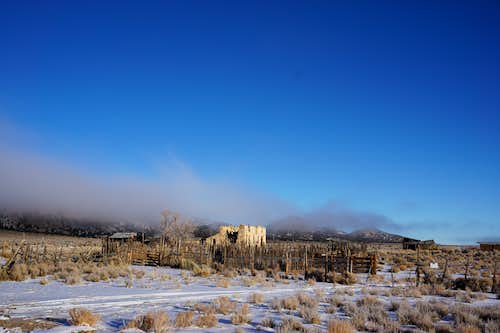 I then decided to try the aforementioned peak to the north, high up above the valley floor. After a quick drive back to NV-82, I turned left, north. The fog still remained spread across expanses of sagebrush, and looking toward Table Mountain of the Monitor Range to the east, I took a quick photo.

Turning on another one of the many dirt roads leading to the western mountains alongside the valley, I came to a stopping point well before the foot of the chosen mountain due to a small creek/ditch I didn't want to attempt crossing in the vehicle.

The hike quickly went from meandering among the sagebrush to weaving between tall stands of pine trees of various types. 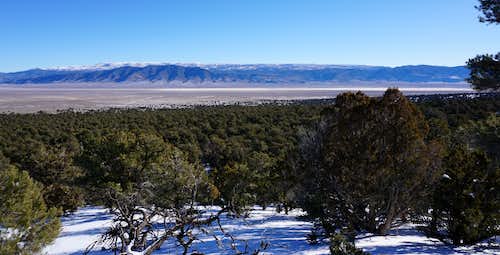 The state tree was alive and well as well. This is a pine cone that I believe fell from a pinus longaeva, the famous Great Basin Bristlecone Pine. 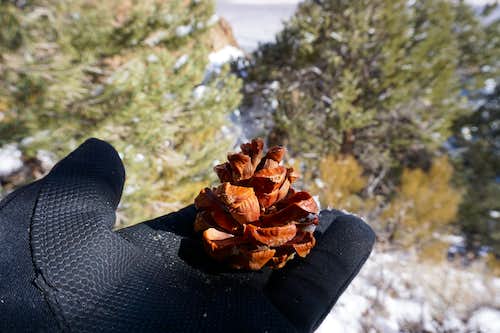 After approximately one hour of trekking over tame slopes, the hike became much more difficult. As usual, an ascent looked like child's play from the vehicle. But soon enough, the steepness of the terrain became relentless, and I was soon stopping to take four or five breaths every 5 to 10 steps. 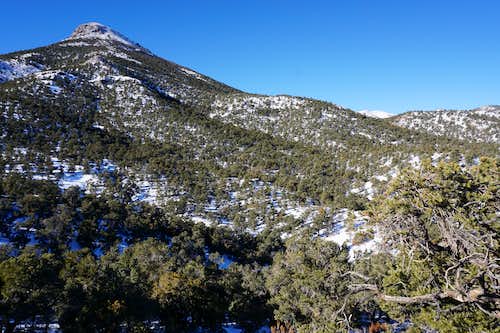 In hindsight, traversing to the saddle to the peak's north before heading south would likely have been much easier. But on this day I simply kept hiking directly toward the peak.

Noontime was my estimated time of arrival on the summit. I thought I'd make it, but with 15 minutes to go, at the rate I was going I'd be late. The summit seemed only 50 feet higher, close enough to touch it, as the cliche goes, but I wouldn't have been surprised if it took 30 more minutes due to my windedness and the scrambling that became necessary. Finally I took my pack off while making sure I had my emergency beacon and my camera still with me. By holding onto the bases of sagebrush and the crevases of certain large boulders, and by making sure I had solid purchase in the pockets of snow I had to step in, I got the rest of the way only five minutes past the ETA. While swearing off crawling over snow-covered rocks on such an incline, I became silenced by the clarity and the peak's surroundings. I gazed off to the northeast. 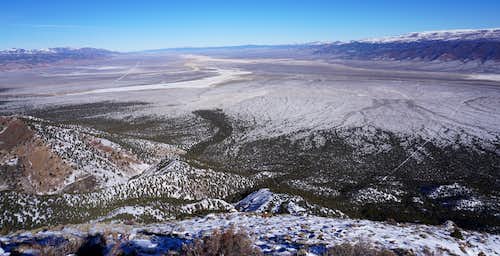 Looked straight across the valley toward the Table Mountain Wilderness:

Pano of Mt. Jefferson to the northerwest:

Pano of southwestern territory, including Little Table Mountain and the farther-away-and-right Shoshone Mountain:

Return to vehicle and beyond

I took my time getting back to the vehicle. Though there'd been no official trail, my tracks through the snow remained, and I simply followed them out for the most part. A tree most likely many times older than anyone on earth had to get photographed first. Feedback is welcome as to what this is. 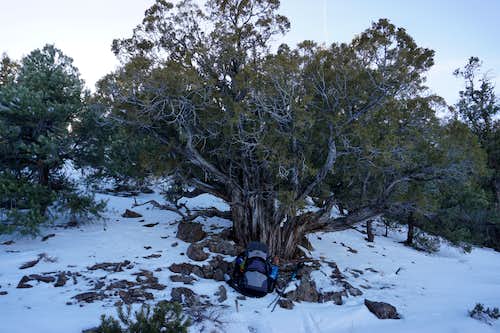 Upon getting back to the vehicle, I needed a meatball sub, and what better place than the convenience mart in Carvers? Heading south and retracing my route from earlier, I had just gotten through Manhattan when the colors in the sky had me forgetting all about being hungry. I'd never seen anything like it, and my camera couldn't even quite show the colors as exactly how they appeared. It was the wildest sunset I'd ever seen. Deep neon reds, oranges, pinks streamed across the desert sky in indescribable ways. They were all intense, surreal, otherworldly. 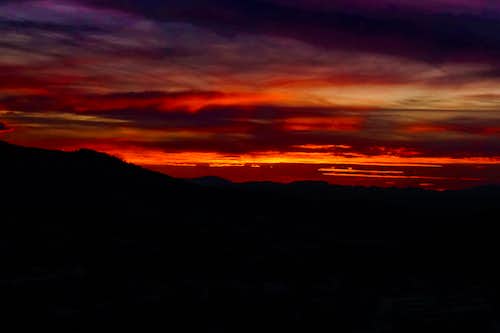