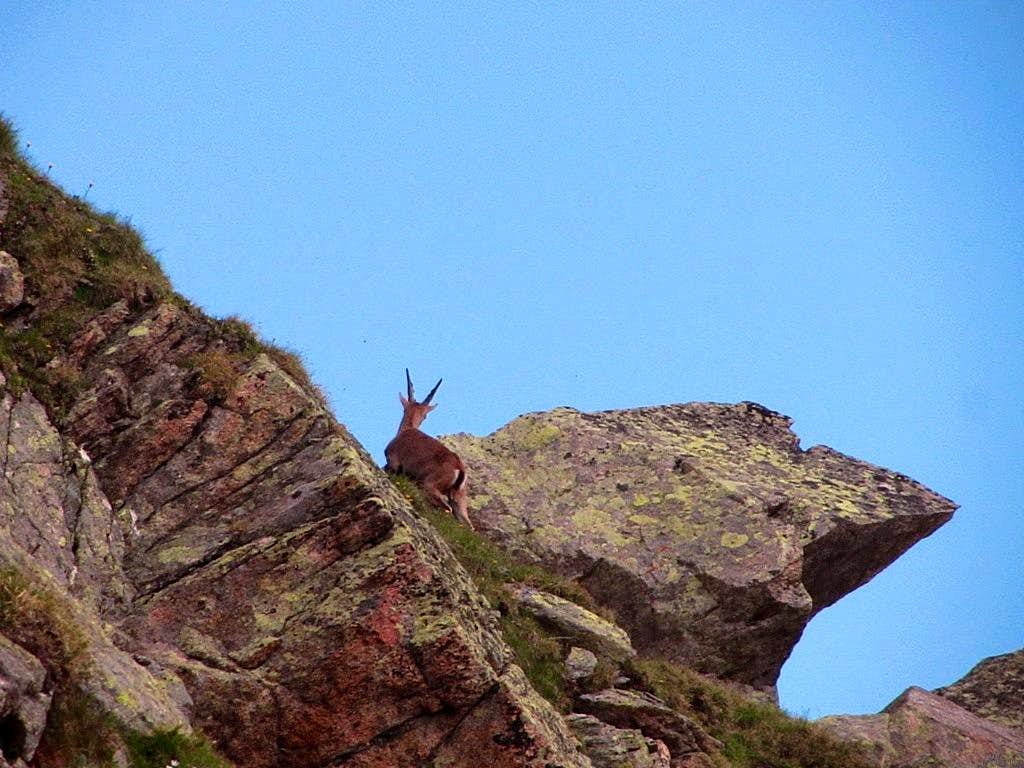 I had to zoom in a whole lot to take this picture, but I don't think it had spotted me just yet. From where it's standing, it's just a couple of minutes easy going to the summit, which is on the left, just out of view. Here is a photo of Klein Vallüla from the same viewpoint, not zoomed in: Klein Vallüla from the same viewpoint, but not zoomed in
Without information about the route, I was making my way to Klein Vallüla from the Bielerspitze. I'm close to the summit now. I had to scramble a few times, and in fact it's going to take me another 10 minutes and a bit of easy scrambling over the slabs to actually get there. 21 July 2013.
« PREV NEXT »

and the horns make it look more like an Ibex. And of course there are no wild goats in the Alps! There are chamois (but they are antelopes), the horns here don't look like chamois horns, though.

Yep, I think you're right, it's very likely an Alpine ibex. The relatively small horns mean it's a female. I wasn't sure though, and so I simply named it a goat because I reckoned it's the more generic name than the species.

There wasn't anything to sign up there. Only a small cairn proved I wasn't the first to climb Klein Vallüla, but that cairn was the only sign that someone had been there before. I saw no marks or traces of a trail. I wasn't really surprised by that, because Vallüla, right next to Klein Vallüla, is 170m higher and, after going up there later the same day, I learned that it was a more interesting climb as well.
As for the ibex, well, she didn't stay up there long enough to sign something. Shortly after I took this photo, she vanished. Probably she spotted me.