A Quick Day on Wheeler

A Quick Day on Wheeler

(This is Part II of a multi-part trip report.  See Part I here.)

After spending the night in the car just east of Aspen, we made our decision to head south to New Mexico, abandoning plans for Utah and Montana.  Driving south through Colorado we passed near Black Canyon of the Gunnison National Park and through Curecanti National Recreation Area before heading south on CO-149.  We ate lunch at the Continental Divide at Spring Creek Pass, where we both commented how much better we were feeling with the altitude 24 hours after our labour on Elbert.  Crossing into New Mexico on US-285, we drove across the Rio Grande Gorge Bridge en route to the Taos Ski Valley.

This ski resort is absolutely beautiful, in a tight valley with incredibly steep slopes right in your face.  Obviously the off-season crowds were small, but there were still quite a few people at the resort.  We set up our oversized tent at the tiny Twining Campground surrounded by the gravel roads of TSV.  This is, however, the perfect place to spend the night for those taking the Bull-of-the-Woods trail to the top (as we would be), and it's free!  We ate some delicious (if a bit expensive) food at the resort before hitting the sack early. 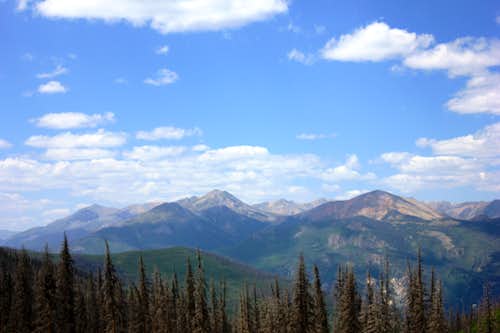 As it turns out, this old man cannot simply sleep on the ground in a tent - my body was so uncomfortable with the flat surface that I eventually gave up and drug my sleeping bag back to the car, where I slept for the night.  My alarm went off before 5am, and we quickly suited up and hit the trail.  It starts off easy enough, but in the dark we got off trail a couple of times.  Eventually we got to the double-track road, which our directions said to follow for a time and then head in towards the creek.  This, we eventually determined, was unnecessary.  I'm fairly certain that the double track will take you all the way to the junction at the top of Long Canyon. 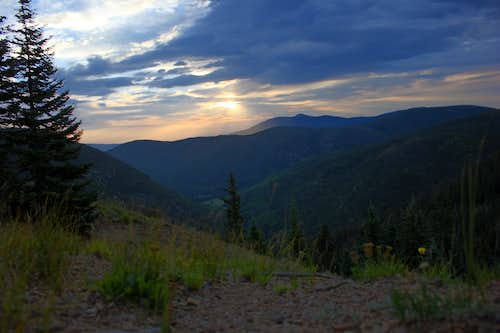 From here the trail flattens out considerably as you contour along Bull of the Woods Mountain and Fraser Mountain.  You are certainly gaining elevation, but not quickly enough to impede pushing the pace, which we did.  It was astonishing just how much better this mountain felt, with two full days of acclimatization under our belts.  From Fraser you descend a bit into the trees and cross the Middle Fork of the Red River (where we filtered and refilled water).  The switch-backs from the river up to the ridge above Horseshoe Lake were definitely the hardest part of this hike (for me at least).  We saw our first other hiker of the day at that point, a younger female hiker with MUCh better fitness than we had! 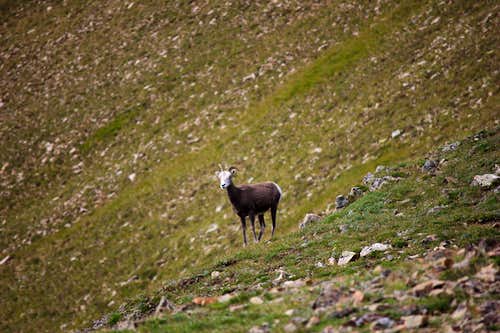 From the ridge you gain Mount Walter, descend briefly to the saddle, then back up to the highpoint:  Wheeler.  Like Elbert two days prior, the summit itself was far busier than our chosen route up.  A whole group of counselor from Philmount BSA camp were spending their day off on Wheeler, and one of them attracted a marmot's interest.  The furry friend got within about 12' of my lens!  We spent quite a bit of time on the summit, but didn't feel nearly as tired as we had on Elbert. 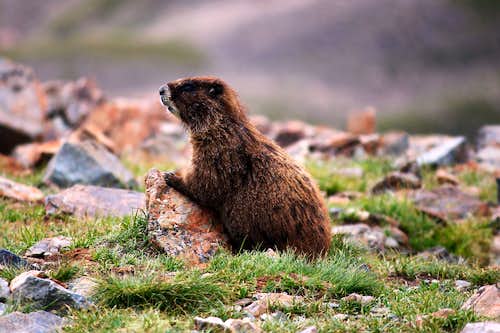 We had always planned to take the shorter (but steeper) Williams Lake Trail back to the valley.  With trekking poles (er, carbon-fibre ski poles) to help, this went pretty well.  This trail was FAR busier than Bull-of-the-Woods had been, but it made for nice conversations in the downward (i.e. easier breathing) direction.  We took in Williams Lake, at which point you have lost most of the elevation, before heading into the beautiful pine forest.  Traffic picks up even more at this point, as day-hikers just jaunting out to Williams Lake fill the trail.  We were getting tired at this point, and just motored back to the parking lot at the trailhead.  However, our car was still back at the main resort area.  We considered trying to hitch a ride down the valley, but ended up just road-walking the rarely used Kachina Road to the tent at Twining Campground.

At this point is was not quite 2pm, with a decent amount of day remaining.  The original plan had been to stay a second night here before starting east the next morning.  However, with so much afternoon still in our pocket we decided to head out and see how far we could get.  Looking at the map, heading across eastern New Mexico was going to be a commitment at least until Clayton, but our real goal was Boise City, OK so we could be set up to hike Black Mesa the following morning.  I took a nap for the first half of the drive before picking up the wheel and taking us to Clayton.  There I had my first stuffed curst Pizza Hut pizza in years.  We hit the OK line around sunset, my only new state of the trip.  We stayed at the Townsman motel, which was nothing fancy but HAD SHOWERS!  Quite a nice night's sleep. 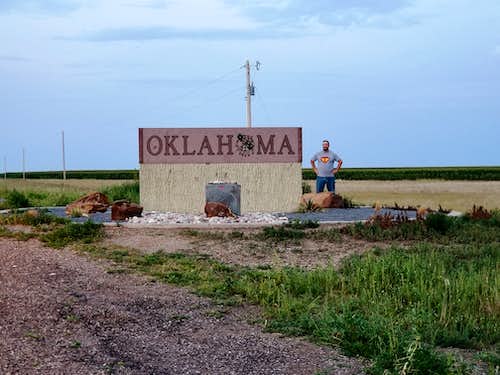 (This is Part II of a multi-part trip report.  See Part III here.)