A scenic viewpoint on the Stutennock south ridge 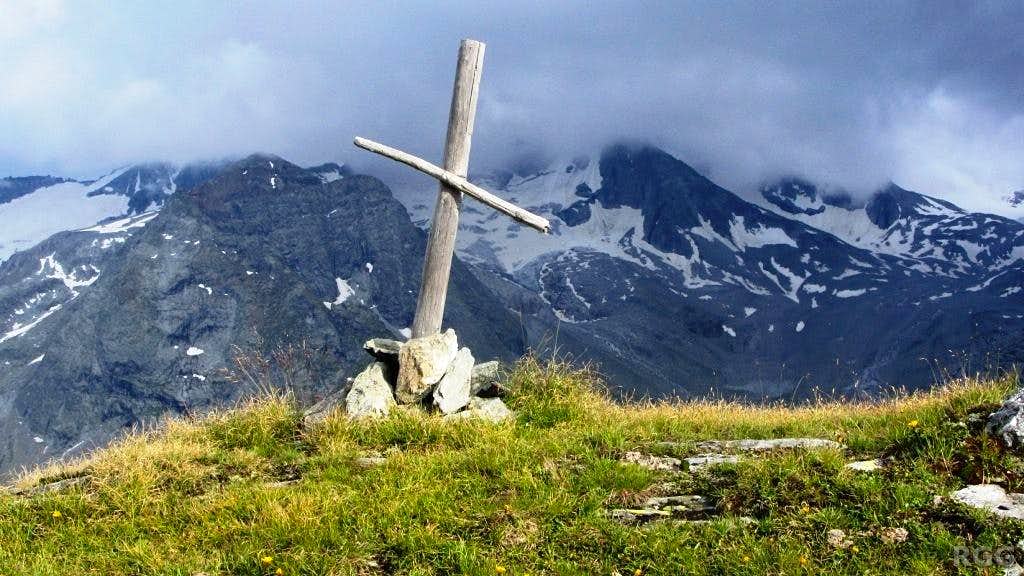 At around 2500 m, a simple cross marks a fine viewpoint at end of the Stutennock south ridge. At this point the ridge is wide and flat. If the weather and the light conditions cooperate, the panoramic view to the big glaciated peaks nearby must be spectacular. I wasn't so lucky, but I still was glad that it was dry and that I had a view at all. I'm looking roughly to the southeast. The dark mountain on the left, with some sun still hitting the slopes, is Riesernock (2737m). Further back, the high ridge is the border between Italy and Austria. At the far left the small Lenksteinferner glacier can be seen, which covers the northern slopes of the Barmerspitze (3200m). In the center, behind the cross, are the glaciated lower slopes of Hochgall (3436m), the highest summit of the Rieserferner Group. As for the south ridge? It doesn't actually end here, to be precise, but turns to the southwest. It also gets much narrower, steeper and more jagged. To get to this viewpoint, the easiest way is not to climb the ridge, but to hike up from the northwest on much easier slopes. There is an old, marked trail, but it's not always clear. 28 July 2014.
« PREV NEXT »