A somewhat unusual view of... 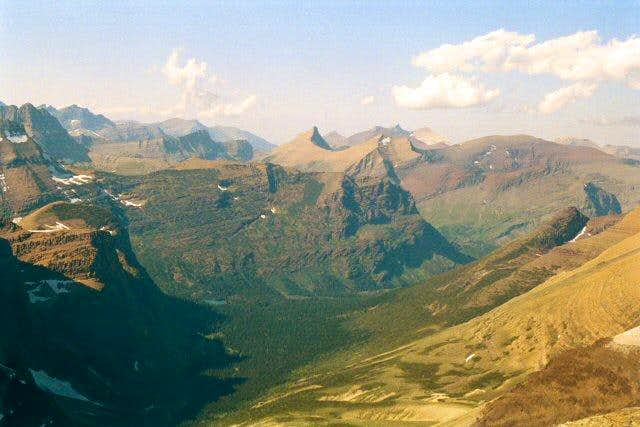 A somewhat unusual view of Crowfeet Mountain and Mount Henkel, which in this perspective can be clearly seen as&#151along with Apikuni Mountain—one large massif. Crowfeet and Henkel are the two "prongs" of what looks like a slightly tilted horseshoe, and Apikuni is the long, reddish dome of a ridge running to the right, practically to the picture's edge. Crowfeet is the highest of the three, and from left to right is almost dead center in the photograph, about two-thirds of the way up; the saddle between Crowfeet and Henkel is twelve hundred feet down from Crowfeet, and a thousand feet back up to Henkel. The south couloir up Henkel, which is one of several routes for all three peaks (and definitely the standard route if doing only Henkel), is clearly seen here. The large ridge beginning in front of Henkel, then running to the left, shows itself as a quite impressive Grinnell Point from the Swiftcurrent Valley; the other end of that ridge, only partially seen on the picture's far left, is Mount Grinnell; the large peak behind Grinnell is Mount Wilbur. Picture by Vernon, from the summit of Piegan Mountain, July 14, 2004.
« PREV NEXT »