A Week After the Fall 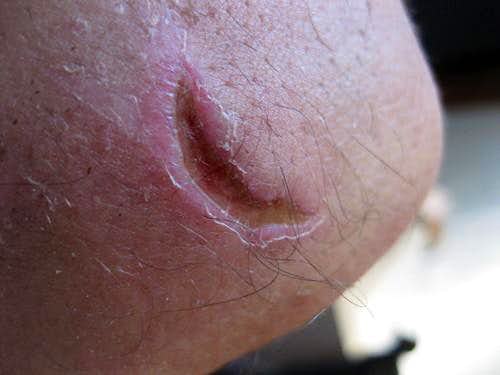 On 7/15/2010, as I was climbing a snow couloir in Wyoming's Snowy Range, I suddenly lost purchase, and, before what had happened really registered, I was sliding quickly down steep snow. Self-arrest attempts didn't work, nor did attempts to seriously slow myself with my feet, and as I picked up speed, I had to wonder how long, and how damaging, the fall would be. In 0.05 miles, (that's 0.05, not 0.5) I lost about 160 vertical feet, and I braced myself for eventually crashing into a small rock island that finally stopped my fall. The crash and the fall ripped the crampons from my feet and bent some of the points, and the crampons were the culprits in one small cut and seem the likely ones for the nasty gash on my elbow seen here. The original wound was more open and much deeper than it is here, and I left a lot of blood behind in Wyoming. Probably, I should have left and headed for Laramie to get it cleaned and closed, but I used snow and Band Aids as wilderness first aid, finished the day with climbs of two rock faces and a little more snow work, and gave the wound a better cleaning once I got back to the car, to the mixed amazement and revulsion of some picnickers nearby. And then I just went on my way. I still don't know exactly why the slip occurred or why self-arrest failed and have thought about this a lot since, but my prevailing theory has to do with the fact that the snow, though not steeper than other snow I'd climbed in the Snowy Range before, was much harder (icier) than it had been in past years when I'd climbed there, making purchase harder for hands, ice axes, and crampons alike more difficult and more tenuous. The worst that happened was an ugly cut that will turn into an impressive scar, but it could easily have gone much worse than that, and I feel lucky not just to be alive but also not to be seriously injured, and I am still amazed that I walked away from it with no broken bones at the least. It also reminded me that every one of us is always vulnerable in the mountains, no matter how well-equipped we are, no matter how experienced, no matter how familiar we are with the terrain. So be careful out there.
« PREV NEXT »

These words couldn't be truer!

I was reminded again the other day when I found out someone I know had fallen and gotten injured at Red Rocks. Nothing too serious, though.

Good story, Bob. That second to last paragraph should be memorized by anyone who takes a step away from the trailheads.

I had a lesson myself, BITD. Coming down the southern slopes of Russell/Carillon. There's a lot of steep sand and I must have been admiring the view when I took a step that turned out to be a steep sand covered slab. Down I went on my right side losing some skin off my right arm. Luckily, the slab was only about 10 feet long, but there were some large angular boulders waiting for me at the bottom. I put out my left hand and caught the corner of one just before I hit and was able to cushion my chest with my hand as I collided hard enough to completely knock the wind out of me. After a panicky moment of being unable to breathe, I noticed that my left hand had a hard lump on the back of it. Apparently, I'd dislocated one of the small bones of my wrist. Somehow, I was able to reduce it by holding out my arm and making a fist. It popped back in, but it was very bruised and painful for the next several days.

This happened during the 2nd week of an 8 week trip through the Sierra and I thought that I was going to have to call it quits. I took a rest day at UBS Lake where I kept it immobile and soaking in ice water. By the time I reached Lone Pine for a planned resupply, it had improved dramatically so I carried on with the rest of the trip.

I've always considered myself lucky that the mountains merely gave me a spanking instead of an ass-kicking.
-Gordon

Indeed, Gordon! That must have been a really worrisome situation at first. I've had some slips and falls on slick sandstone, which is pretty similar to what happened to you, and have been lucky to walk away with nothing worse than some scrapes and cuts and a jammed thumb. One such fall in Red Rocks last April left me with a bruised, sore knee for a few weeks, and there are still some cactus spines embedded in my legs (I fell right on top of a cactus, both legs).

I'm glad you were able to complete the trip!