A wicked view of Eolus from... 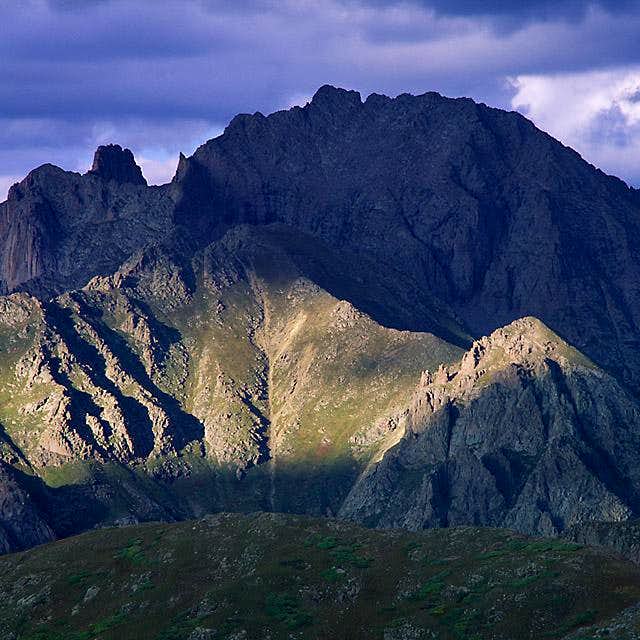 A wicked view of Eolus from near a saddle just east of Overlook Point, which is on the south side of the Needle Creek Valley, west of Mt. Kennedy. Directly below me lay four gems, three of which were in view, of Ruby, Pear, Emerald and Webb lakes. In the course of researching a book project I'm working on, I came across several photos in the CMC archives in the 1910's and '20's of Emerald Lake reflecting Pigeon and Turret peaks. Mark my words, my best friend from TN and I will be camping at Emerald Lake next summer! Photo taken with a Mamiya RB67 medium-format camera, Mamiya-Sekor 360mm lens on Fujichrome Velvia film.
« PREV NEXT »

Your shot gives a nice look at 'West Eolus', left of the main summit. That's a wicked looking peak! Do you think the smaller summit in the foreground is the 12er that splits Emerald Lake from Webb Lake?

One of Erin's and my goals for next year is a climb to Overlook Point by that route you told me about up Lime Mesa. It's incredible to me that there's a day-hike that leads to the edge of the Needles. Thats a lot of bang for the buck!

My best friend is coming out in July (don't know if I mentioned that previously), and we're definitely spending a few nights down around Emerald Lake. Can't wait!

Ahh... I get it now... the peak I called the 12er is the end of that long ridge that pushes southwest from Eolus. Have a great time down there this summer!

I'm glad it wasn't your LAST Colorado fourteener! Interesting; I came across that shot of yours before, but for some reason didn't make the connection between that pinnacle and the feature in my photo. Comparing them now is quite a treat. Awesome shot.

Some friends and I descended the West Face after climbing the South Ridge in 1967. If I remember correctly we did one short rappel.