A Windy Day on Hallett Peak 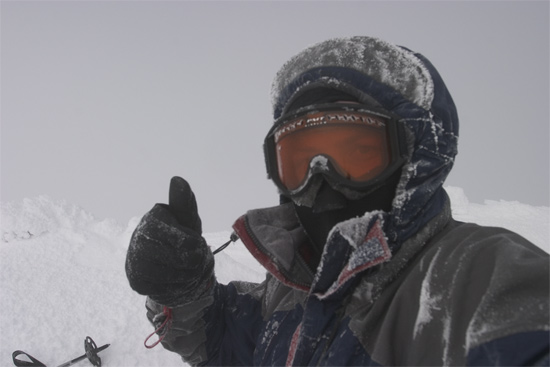 Me on the summit of Hallett Peak
After the previous weeks failed attempt to summit Hallett, I was pretty excited about getting back up there. I woke up to another windy morning here in Estes, so was a little concerned with how bad it was going to be above tree line. I checked the ROMAN weather stations and saw that there were 70 mph gusts on Niwot Ridge, which is a bit south of where I was going to be for the day. So I was hoping for better conditions as I drove toward the Bear Lake trail head. The trail was well packed, so it was a bit easier than last weeks trail breaking slug up the Flattop Mountain Trail. The divide, as well as the lower reaches of Flattop Mountain, was blanketed in a thick layer of clouds, a new experience for me. Usually, in the summer months, I am running from threatening looking clouds, not running into them facing 60+ mph winds. It was a fairly uneventful hike through the trees that quickly became interesting once I got to about 11,500 feet. That is when the wind really picked up. There were times I had to drop down to regain my balance, and other times when that wasn't a choice and I was blown over. This was a trying time for me, being my first time in this situation, it was hard to keep moving forward, into these conditions. Soon, the views to the east were no more, as I was engulfed in thick clouds. Most of the time, it was easy to see the next cairn or at least tell where the trail was supposed to be. But as I got higher, toward the summit of Flattop, visibility was reduced to only about 10 to 20 yards. Not only were the clouds very thick, but there was a lot of blowing snow that made it hard to see. I did remember my full face mask this time, and it made all the difference. I was "comfortable" the entire time. Once I realized that I was well prepared for these types of conditions, my fear subsided and I began to really enjoy the experience. Looking down into Tyndall Gorge on the descent from Flattop.
One aspect of the day that I was really excited about was the presence of Rime Ice. Everything was coated with Rime...the rocks, any exposed grass, myself, and even snow drifts. It was pretty amazing. I had seen this in pictures and very small amounts of it in person, but it was everywhere...and thick. The wind kept coming and I kept walking into it. As I said before, I was getting used to the way it played with my mind, and the urge to turn around was completely gone. I was actually enjoying the harshness of the tundra. Realize it for the beauty that it does hold. For those who are familiar with this trail know of the hitch rack that is just below the summit. This was where the weather really got bad. The wind picked up even more and the large snowfield (that lasts well into July) was to be crossed. Once out on the snowfield, everything was white. There was no ground, there was no sky, only me and the sound and force of the wind. In fact, if the wind wasn't blowing, there would be no way to tell which direction to go. This was one of the strangest sensations I have ever experienced. I just kept walking into the wind up the gentle slope and was soon back among rocks and cairns. Before too long, the sign at the North Inlet/Tonahutu/Flattop trail junction came into view about 10 yards ahead. I was there! Now on to Hallett Peak. This is when I pulled out the GPS and began marking way points. The visibility was just too low and knowing that Tyndall Glacier (and the drop into Tyndall Gorge) was only feet away, the GPS made me feel a bit more comfortable. On the way to Hallett, I marked a way point every 100 steps, thinking that if the weather got any worse, I could just follow the way points back to the summit of Flattop. Every time I wanted to mark a way point, I had to scrape a 1/16 layer of ice off of the screen in order to see what I was doing. It was pretty crazy. At last, I was at the base of the final push to the summit of Hallett Peak. I couldn't see very far ahead of me at all, but I have been up there are few times, so I knew what was ahead. It was a slippery, cumbersome (with the snowshoes), icy and windy walk up the final slopes. About 40 vertical feet from the summit, I was blown over as the wind was the strongest it had been all day. I had to crawl to the summit, as I couldn't have stood if I wanted to. But I was there!! My first ever Winter summit! It was a great feeling to be on top. Too bad there was no view. I upheld my Hallett Peak tradition and ate a peanut butter and jelly sandwich on the summit, hunkered behind one of the wind blocks after digging a bit of the snow out of it. I took a couple of pictures from the summit and, once again, crawled back down about 40 feet before I could stand again. Then I was off...back to the trail head and some food. Just as I was coming down from the summit, the clouds began to break up. The wind never stopped, but I was rewarded with glimpses of blue sky and great views. As I got back on the East side of Flattop's summit, the sky really cleared up. I did take the time to take a few pictures on the way back down. But the winds never ceased, and I was engulfed in large clouds for a few seconds at a time, as they were rapidly moving from West to East. I wish I had a video camera to show how fast the clouds were moving all around me. It was a fantastic experience on a classic Rocky Mountain National Park mountain! 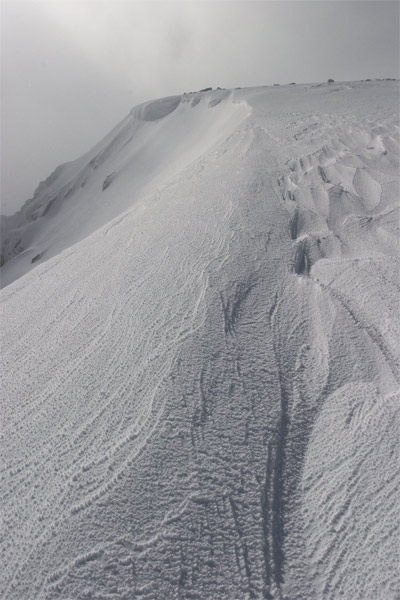 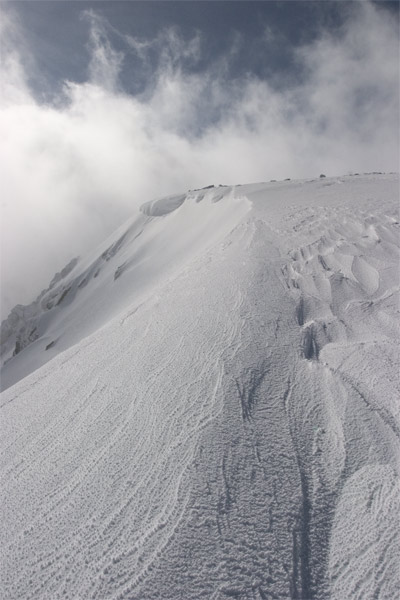 These two pictures were taken about 4 or 5 seconds apart. Strong winds were really moving the clouds.
To see more pictures...go HERE.