A Winter Traverse of Timpanogos Massif

A Winter Traverse of Timpanogos Massif

I've lived in Utah for 5 years now and only a few mountains here impress me as much as Mount Timpanogos. Looming over Happy Valley, Timpanogos is the 2nd tallest peak in the Wasatch. It's ridgeline extends for 8 miles from Provo Canyon to American Fork Canyon. Not only does Timpanogos have a commanding presence, it's committing, rugged, and intimidating. Along the ridgeline, there are 4 distinct 11,000' peaks (South Timp, Bomber Peak, Timp Main and North Timp). In itself, Timp almost feels like a separate range! After a dissappointing February in terms of snow, we decided it would be a great time to put in a big alpine/ski mission.

The plan was to traverse the entire ridgeline from it's southern most point (near Sundance ski resort) to the northern most point and ski out of North facing couloir, Cold Fusion. Starting from the resort made sense, as it would maximize our time on snow, reduce the amount of bushwhacking and allow for fast travel to start. 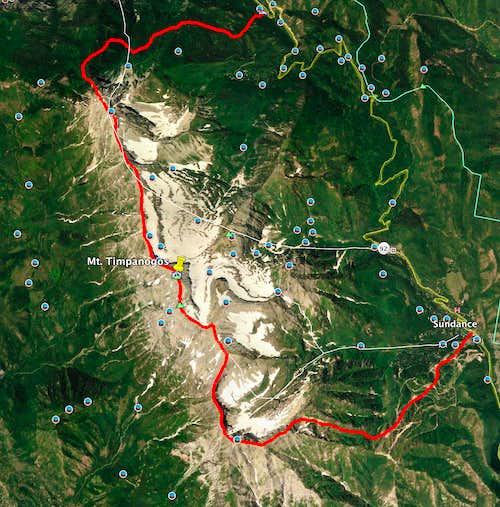 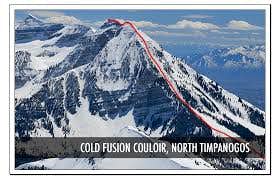 At 2AM, we met at Mutual Dell Campground, on the North end of the range and picked up my two friends, who were sleeping soundly in their car. In total, there were 4 skiers. From there, we drove to Sundance Ski Resort, put on our skins and started at roughly 3AM from the parking lot. The first 500' we kept our headlamps off as to keep 'stealthy' in order to avoid getting caught by the Sundance ski police *eye roll*. About 45 minutes and another 1500' later, we were out of the resort, having moved very fast on the groomers... Once we arrived in the 'wild' snow, things quickly became interesting. All aspects had a layer of perfectly horrible, breakable crust. This was a 2" ice crust on top of 2' of sugar snow from hell. Booting was fast at times, but mostly frustrating. At one point, we started to 'baby crawl' through the crust to stay on top. We all started making baby noises and joking about how absurd our morning was. Finally, after about 2 hours and reaching the ridge, our first glimpses of Sunrise appeared. Good morning, Utah! 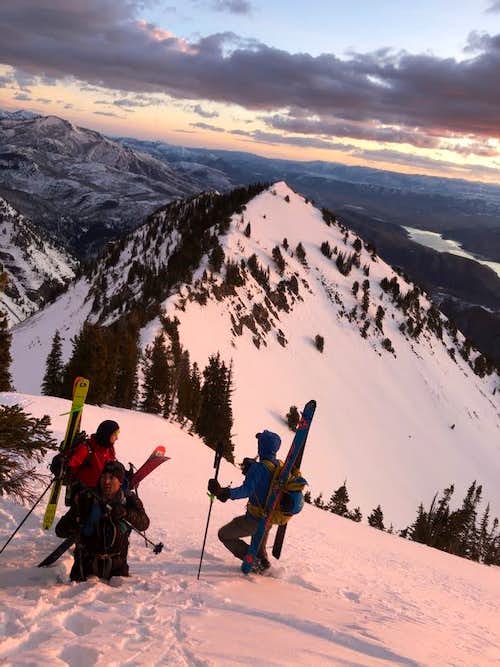 Looking at the South/Southeast side off South Timp was pretty inspiring as we ambitiously picked ski lines down the face.... Tons of potential on this mountain. 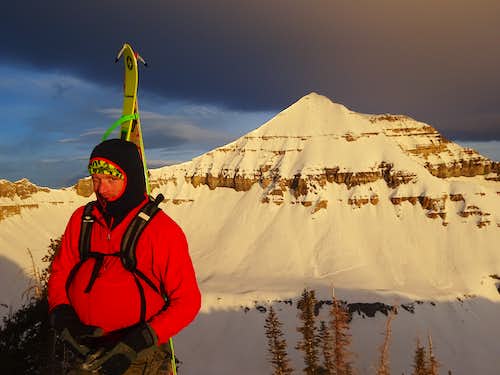 From the ridge, we were hoping the skis would come back on our feet and the skinning would commence. Our optimism did not hold true, and the horrible booting continued and even got worse! Luckily we had a team of 4 and some mountain goat tracks to take turns through the slog. 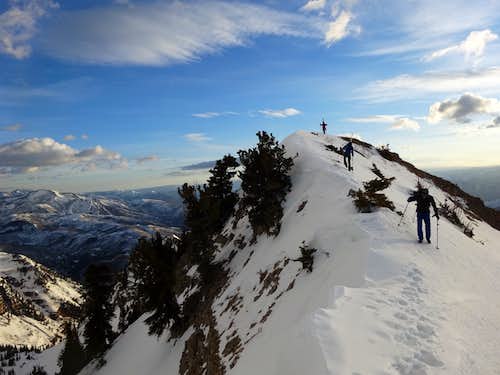 The biggest concern we had were the predicted winds. Winds were expecting to be 30-40mph with gusts up to 60. Timp ridge is not exactly the place to be in high winds, but we figured these conditions would be maneageable, considering how warm the 11k marker was expected to be. Sure enough, the winds were as expected to be... yay. We started to consider our bail out options, mainly because we are fair weather gumbies, but decided we could hang. It's easy to plan/commit to these trips in the comfort of a warm home and Google Earth. Luckily the views made up (mostly) for the winds :) 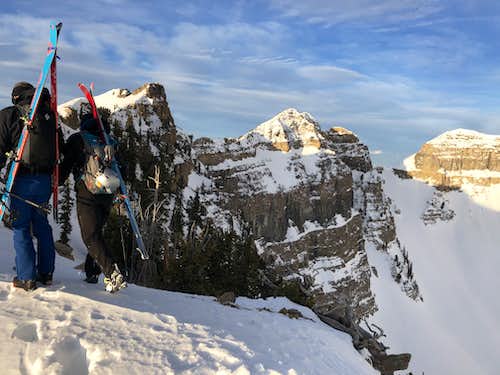 The ridgeline was simple and straightforward, although definitely not what we had hoped and prayed for. The scree continued for what looked like miles, with no snow for skinning on the ridgelines.... I guess we were really testing the 'walk mode' in our AT boots. Oops. On the east side, cornices remained moderate, but were incredibly dangerous due to the 'crevasses' that formed in between the ridge and the cornice itself. Yikes. The call was to not step on ANY snow on the East side of Timpanogos. 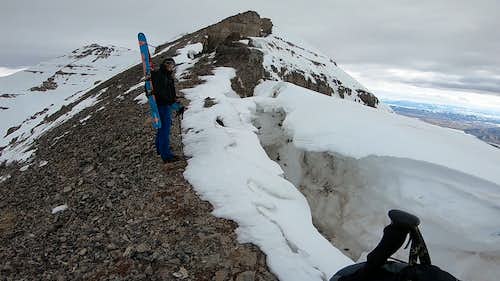 The first peak was a quick walk from the ridge, with a small sneak option through a tiny chute. Onto Timpanogos South! 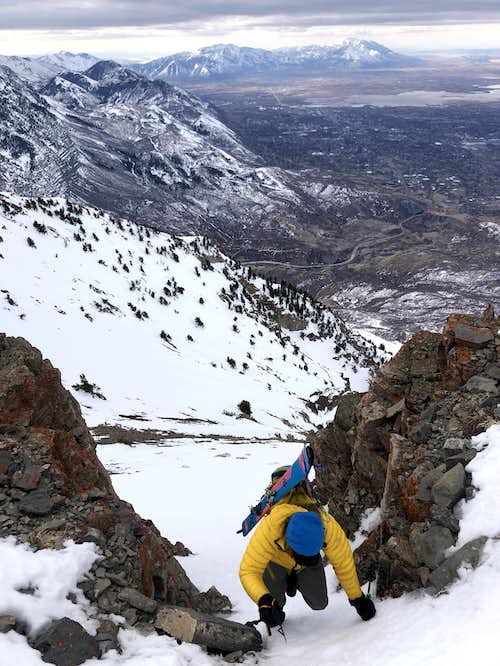 Once topping out on the South Summit, we could see most of the route, it was going to be a long day :) More ridgewalking, winds and with no scrambling until we reached Bomber Peak. This was turning out to be an easier day than we thought.... 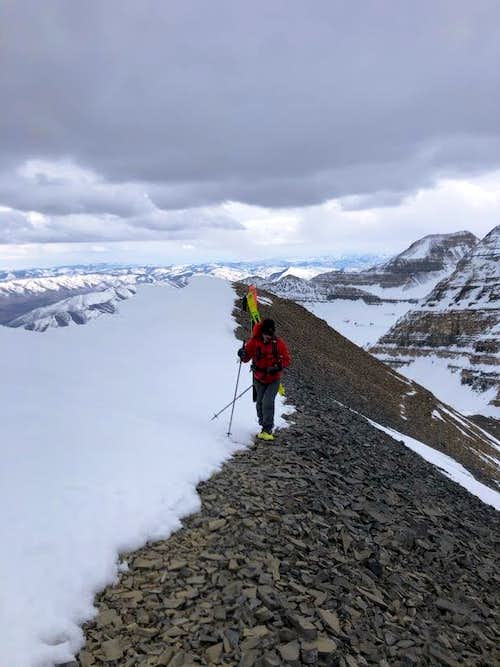 Bomber peak is one of my favorite mountains in Utah, due to the crazy history and with a giant alpine wall on it's North Face (https://www.summitpost.org/bomber-peak/425343). It was also one of the only summits on Timp we actually managed to 'ski' with a 500' decent to the saddle between Bomber & Big Baldy. More skiing and less walking, please! 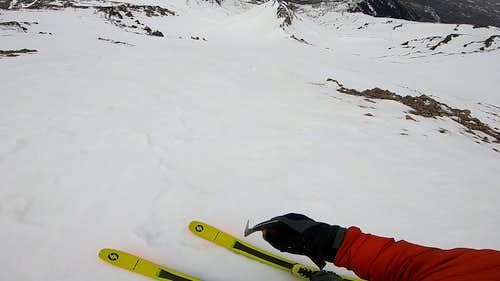 From the saddle off Bomber, the scrambling began on the ridge, which we were happy to have a little bit of excitement... Although the route does not go above class 4 and the rock is relatively solid. Solid rock on Timpanogos is a bit of an oxymoron, considering it is limestone... but at least it wasn't disinegrating in our hands?! Everest ridge never fails to disappoint! 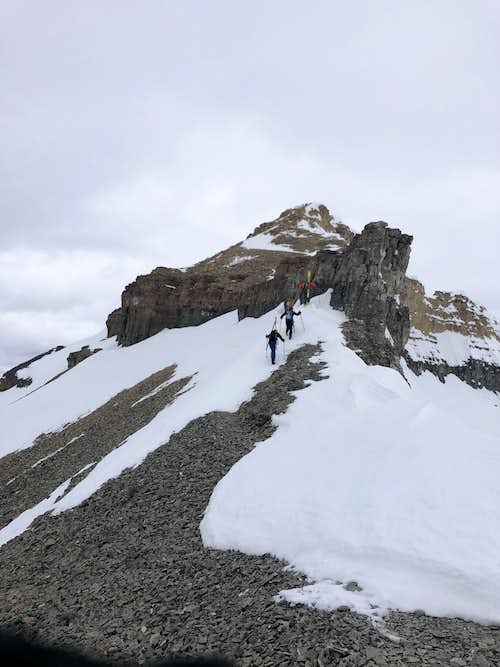 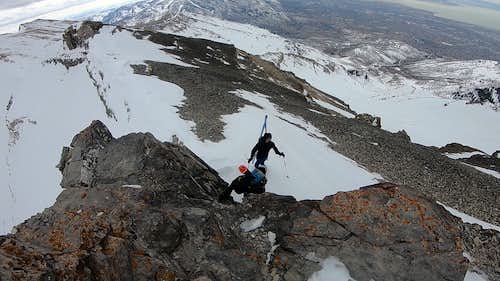 Some more scrambling and ridgewalking (word of the day) led us to the summit shelter on the main summit of Timp. We were happy to have a little bit of shelter from the unrelenting winds. 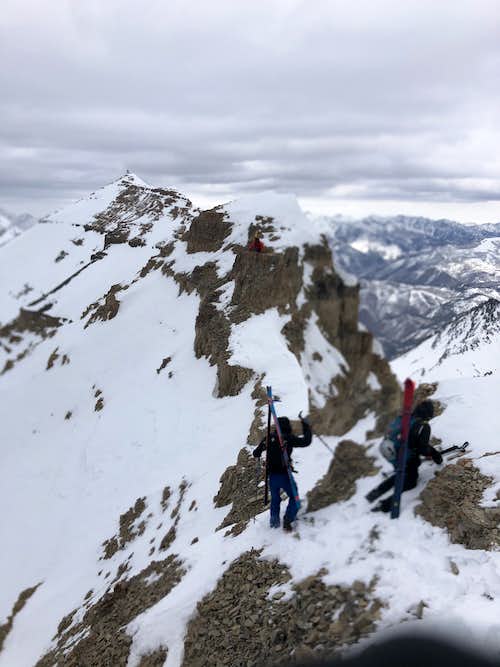 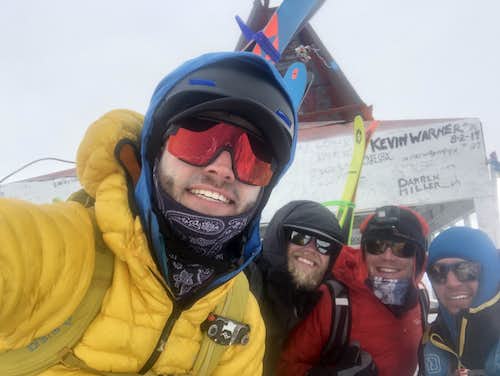 After refueling our bodies and wind-tolerance meters, we braved the gusts and looked beyond to North Timp to scope our crux, a cliff band roughly a mile away. Hoping we could ski this section, through a 'sneak cliff' we were sadly disappointed. A previous trip report from the Dorais bros & Jared Inoyue gave us unwarranted optimism (http://wasatchspeedproject.blogspot.com/2011/04/timp-traverse.html). More bootpacking for the sad ski mountaineers :( Luckily, we found the summer trail and a straightforward route through the cliffs. In a few sections, all that remained was a layer of bulletproof ice in a place where any slip would likely be fatal. 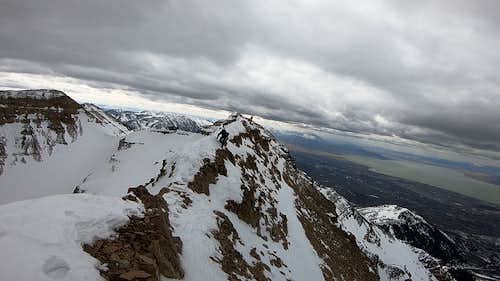 Our feet were really starting to hurt and we were becoming complacent with the simplicity of the traverse. Soon after, I heard a 'OH SHIT' from the others, which my first assumption was that someone had slipped where they shouldn't have and was likely dead. Not a great thought. One partner had indeed slipped and slid approximately 20' before his quick reflexes allowed him to flip over and self arrest. Any slip on Timp will likely result in a 4000' runout into oblivion, with a few cliffs scattered in to make sure you die. Spooky. Grateful the outcome wasn't worse, and just a friendly reminder to keep your guard up, no matter how easy the terrain is. 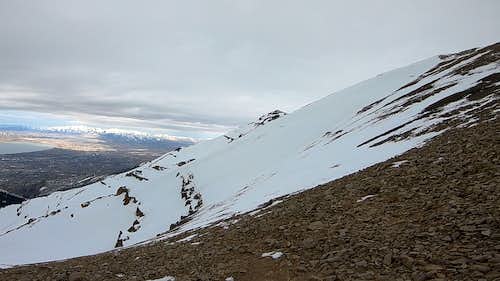 From the end of this crux, it was 3 simple humps until the North summit of Timpanogos, the end of our scree walk from hell! Or so we thought..... Looking down into what I had stupidly assumed was Cold Fusion, we realized skiing was out of the question. The line was at least 1000' of bulletproof blue ice... What in tarnation! I've skied Cold Fusion before, so something really seemed weird... I didn't really recognize any of the features and I felt like we were off in aspect. Peering into the more northerly aspect, that didn't look so promising either, more ice and scree. After downclimbing 2000' of blue ice & through some cliffs, I had thought a slide had taken out the line and left the rain crust from 2/7/2020 and rocks on top. Eventually we found a route through the cliffs and put on our skis to ski out on surprisingly good snow... After a few turns into the meadow my friend pointed out the REAL Cold Fusion, which we failed to actually ski. I was embarassed. I had never skied the top 200' of Cold Fusion ad didn't recognize it. Both lines were north facing with an almost identical looking exit. Oops again. We creatively coined our line 'Hot Fusion', which was really like 'Not Fusion'. From here, we skied back to the car in an uneventful and depressed fashion. We were stoked to have completed the traverse but very grumpy that I botched the exit. Sorry ski friends :( I dun goofed. 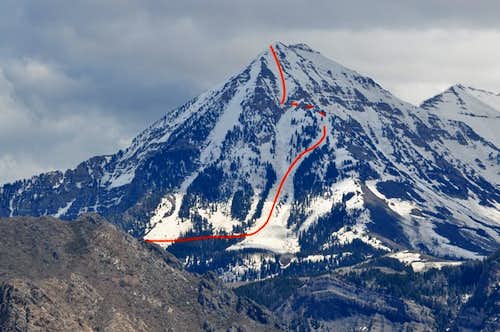 In the end, the drive through Provo brought the positive energy back, as we got to see the entire ridgeline we had just traversed. We were stoked on our day, 15 miles and 9000+ feet of vert...Mostly on an 11k ridgeline. We were hoping to claim the first 'Full Winter Traverse' of Timpanogos. Full meaning the ENTIRE ridgeline. Does it matter? Nope. The adventure is what it's all about... But it sure does help our bruised egos and feet. Onwards to Chipoltle! :) 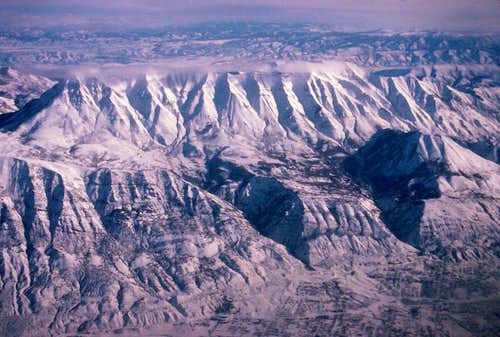 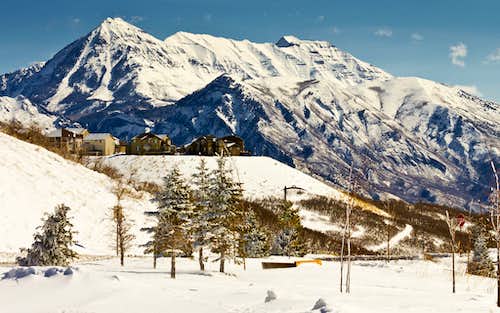