Abalakov in history and in ice 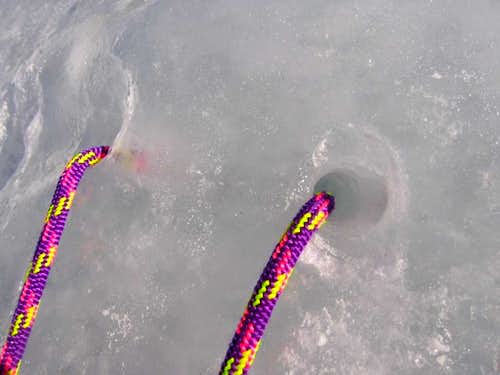 It's a V shaped hole in the ice drilled with a 22cm long ice screw.

The Abalakov thread, or V-thread is ice protection named after Soviet climber Vitaly Abalakov. To know how to make a proper Abalakov (=v-thread) should be a requirement for anyone climbing multi-pitch ice routes. It is easy to create, it doesn’t require leaving expensive gear behind, e.g. rappeling on an ice screw, and it is very safe. I have used abalakov’s in anchors, even as an protection when running out of screws, and mostly it is used for rappel.
V-Threads are ultralight, and many times more convenient for rapid rappels descents than any other anchors, including rock anchors on alpine routes. And you don't need much equipment to build it - all you need is one ice screw (at least 17 cm in length, or longer), and something to thread with (threader, one technique even describes using a small nut - see Low-cost Rappels on Ice).

It is great mountain safety invention. Thank you Mr. Abalakov...


Vitaly Abalakov and his brother 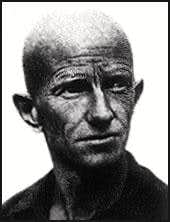 Thread illustration
Abalakov Thread is named after Vitaly Abalakov who was a Soviet mountaineer (1906-1986). I could not find much on the web about Vitaly, only that he was born in Yeniseysk, Siberia and died in Moscow. He and his brother Yevgeniy Abalakov were both alpinists. Yevgeniy did the first ascent of Stalin Peak, renamed Communism Peak in 1962, and Ismoil Somoni Peak in 1998. Yevgeniy was part of a group of military mountaineers who worked their way through mine and ice fields on Mt. Elbrus to throw off Nazi flags and set up Soviet ones. This sympolic event crowned the 15 months long Battle for the Caucasus. I remember vaguely reading about this when climbing Elbrus.

They were  both arrested in 1938 by NKVD and were under investigation until 1940. The accusation was propaganda of western mountaineering techniques and being a German spy. Yevgeniy died in 1948 in Moscow under obscure circumstances.

Vitaly went onto inventing camming devices and Abalakov thread (or V-thread). He was awarded Order of Lenin, Order of the Badge of Honor and titles Honoured Master of Sports of the USSR. Vitaly is regarded as the “father” of Russian climbing. Vitaly Abalakov made many difficult ascents including Lenin Peak in 1934.


Supposedly, Jeff Lowe started to use v-threads in 70s, and some older ice climbers who climbed before that era still do not like to use v-threads very much (e.g. my friend Michael Covington, who is an artist when it comes to ice otherwise).


Back to Threads - when to use it?

The Abalakov Thread or V Thread has over the years become the standard abseil anchor for descending from ice climbs. You can also use it for creating anchors, or even instead of placing a screw (if you are short, but little more time consuming). Many studies confirm that Abalakov is stronger than leaving an ice screw behind for an abseil.


How about vertical abalakov (Anderson Thread)? The traditional thread is horizontal. The vertical thread as explains the name is vertical, and still relatively new in ice climbing. According the Ice Climbing Anchor Strength article the vertical threads increased the overall strength (horizontal 11.3 KN; and 14.4 KN for vertical). Although there is a strong difference between the two types of threads, both are strong enough to hold a climber. The vertical orientation also makes it easier to thread the rappel rope, as you'll have gravity working for you.

How to construct it? 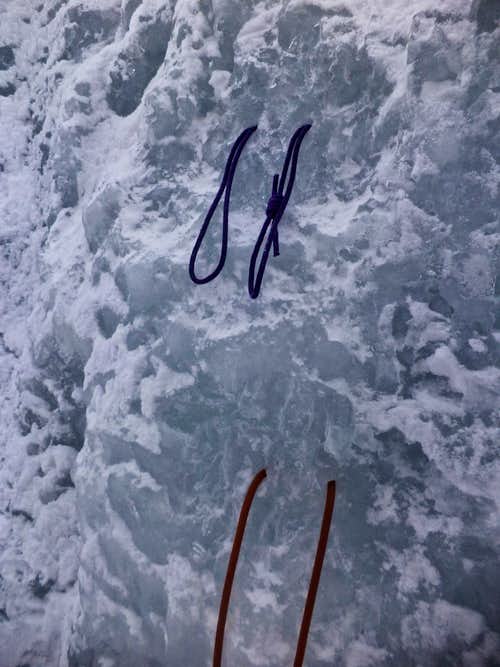 I love to practice 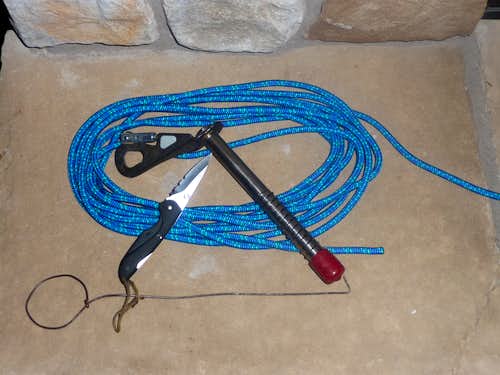 V-thread tools: 7mm perlon, retriever, long ice screw, and a knife with a half serrated blade.
I have made my first V-thread 2 years ago with this large tool made by Black Diamond, and I think I was laboring at least 1/2 hr. I kept practicing and carry with me much lighter tool (BD instrument is bulky and heavy, not practical for long routes), and I can make Abalakovs in less than 5 minutes now. It is good to practice v-threads, if you will ice climb, you will need to know how to construct it.

Equipment: 1 long ice screw, hook (either one of the tools above, or I heard of people making the hook at home from wire coat hanger).

How about when the ice melts and all that old webbing left on the slopes? It is true, it does leave trash behind. Well, if you are fast, you can abseil on rope pulled through the thread. You don’t want the rope to freeze in, so move fast. And, it does mess up the ends of your rope from hooks poaking into it. I also heard that cows sometimes like to eat the old webbing in the summer, and it can kill them.

And how about v-thread already in place? You will find v-threads already built on popular climbs. I think you should always examine it. You can back up the old v-thread with an ice screw for the first climber to go down, and the last person can remove the screw knowing the v-thread has been tested. OR, you can place another v-thread next to this one, and go off two v-threads.

Instructional video HOW TO BUILD A V-THREAD

View Abalakov in history and in ice Image Gallery - 15 Images

read, Liba.
Lots of stuff there that I did't know about Abalakov and his anchor invention.
Most of the ice around here is gone already, but I may just grab a 50 lb slab from the local 'Tour Ice' and learn how to make those things.
:)

Thanks Tim, I usually find Abalakov's in place already, or we have lots of anchors on frequently climbed routes. I still love to practice and think it is a great skill to have.

I could not find the year when Abalakov created his thread - but I doubt it was in 1978 (he would have been 70 years old). He invented camming devices in 1930s, and I believe the invention of his thread was in 1930-40s..., definitively not when he was 70 years old.
I think that Jeff Lowe did not copy him, but created v-thread totally on his own, based on people rapping from ice bollards, he just went deeper.
My good friend Michael Covingtion, who was a pretty famous alpinist (climbed a lot with Doug Scott and even Messner) does not use v-threads - he climbed in 70s.
Still would like to know the exact year of invention....I will try to e-mail a couple of my Russian friends to see...
Thanks for your comment. We owe Jeff Lowe for a lot of inventions in climbing...

Alex believes the invention happened before their ascent of Peak Lenin - so around 1934!