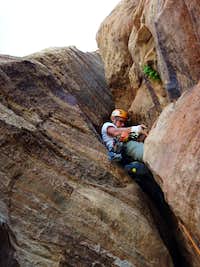 6th Pitch
Although there are many outstanding free routes in Zion, they see little traffic because the Park generally lacks the easier climbing that can be found at Indian Creek and/or Red Rock in NV. A route I helped popularize many years ago, Iron Messiah (5.10, 10 pitches) has sort of stood alone as a long moderate free climbing choice in Zion and is south facing. Now it has a twin route in terms of mellowness that is mostly shaded.   ACL Arête (5.10, 10 Pitches) was established in 2010 by non-locals and is softly graded in comparison to just about any other route in the park. They claim half of the pitches are at 5.10, three at 5.10+. One could easily make the case that one of those is 5.7 or 5.8 and several are 5.9 by most standards. However the majority of the pitches do offer good climbing on decent rock. 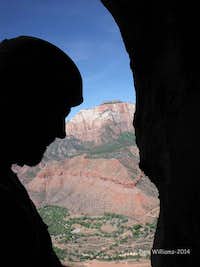 ACL Arête runs up the center of Bridge Mountain which is a massive peak (east) overlooking Springdale (west). Getting to it is a bit of a bushwhack, but the climbing itself is surprisingly clean. The route, including its many anchors, both belay and rappel, is heavily bolted by Zion standards. Only the first pitch offers a decent trad experience. Pitch four offers the crux moves (face-sport) of the route. Pitch five offers perhaps the most interesting move, pulling a short overhanging hand crack into a large pod (what the FAer’s refer to as the Arizona Hot Pocket). The worst rock on the route exists on the final two pitches which were a bit contrived, the ninth pitch could have easily just been tagged on to the eighth pitch and the final pitch did not add much to the line. They bolted the whole route such that you can rap it with a single 60m rope. 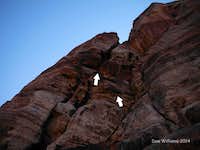 5th Pitch
There are a variety of options regarding getting to the base of ACL Arête. One that avoids the most elevation gain, but exposes you to plenty of bushwhacking, is the continuation of the Confluence trail from Smashmouth and Take Back the Rainbow. From those routes on (southwest), there is no established trail.   The trick is finding the path of least resistance which undulates somewhere between the very base of the wall and the top of a loose cliff below. The included topo photo is your best guide at finding the actual start which offers a crack for the entire first pitch.   Regardless of whether you are approaching from town or taking off on the Confluence trail which starts at the last switchback before the tunnel, the approach generally takes at least an hour.

1st Pitch- 100’- 5.10+/ This is the best pitch of the route. Place a piece or two right off the deck as you pull the overhang on jugs and into the finger crack where a bolt protects the transition. Follow the crack passing another bolt along the way to a fixed belay on a large ledge. Good rock that protects very well by Zion standards.

2nd/3rd Pitches- 180’- 5.9/ These two pitches combine easily and I can’t say I felt any 5.9 moves on them. Start up the corner to the right to a ledge (fixed belay), then traverse back left up past several bolts on several short walls that lead to yet another large ledge. Move to the right to a fixed belay below a bolted dark arête. .

4th Pitch- 100’- 5.10+/ This is a pure sport pitch on the best rock of the day. Clip the bolts up the arête. There are several moves at the grade. On the last crux, move back right to the other side of the arête. There is a fixed belay on a ledge that is part of a huge terrace.

5th Pitch- 100’- 5.10+/ Move the belay to below the large wall in front of you. Start below and right of the large pod (chimney) on the left side. Follow the bolts as you traverse left to just below the hand crack in the overhanging roof below the pod. Make a physical move to access the pod and fixed belay or small gear belay at a comfortable seat further in. The roof pull on this pitch was the most enjoyable event of the entire climb.

6th Pitch- 110’- 5.8/ Climb up the short chimney with medium gear via easy moves to another ledge. Continue up past bolts on short walls to the left of the tree filled gully to a fixed belay below a bolted face above.

8th Pitch- 100’- 5.10-/ Again, no 5.10 moves I could find, but a bit more interesting sport pitch then the previous one.   The first 30’ if run out easy, then move left to start clipping bolts up a seam, traverse right at the finish to the fixed semi-hanging belay.

9th Pitch- 60’- 5.8/ Angle up and left on a mixed pitch of bolts and gear. Rock deteriorates on these last two pitches. At the top traverse back right to a fixed belay on the shoulder. If you can handle the rope drag, move the belay up and left to the base of the next pitch, yet another fixed belay.

10th Pitch- 100’- 5.9/ Move to the right side of the arête and climb a crack with a piece of gear then start clipping bolts up crusty rock to the top of yet another feature which tops out on a huge shoulder/terrace on the mountain. A fixed belay/1st rap station is on a wall about 30’ ahead of you.

The whole route if fixed for a single 60m rap, although a 70m rope will give you more comfort on several of the rope stretchers. I would avoid making any double rope raps due to the loose terrain. The first rap is awkward.   Walk back to where there is a single bolt where you topped out and rap back down to the bottom of pitch 10 and free solo back down to the top of pitch 9 unless you use a 70 which will reach. Then single rope raps down 9, 8 and 7. Pitch 7 is a rope stretcher for a 60m. Rap down the tree gully to a rap station atop a large block (skiers left of the chimney. Pitch 5 is a rope stretcher. Walk back to the top of pitch 4 and make four single rope raps to the ground.

The FAer’s had made no notes on ropes. You can do the route with a single 60m.  Depends who I had with me, but next time I would probably take a single 70m. They call for a double rack from #C4 .5-3’s and medium stoppers. Next time I would take a single rack from .3 to #2 and no stoppers. The route is well bolted. The first pitch will be the most gear you place all day by far. If I were to take a second piece of any size, I would take two #1’s.  Half slings, half draws.  The route was well shaded and cool on a 90F day in Springdale. We climbed all pitches in the shade in May meaning they face as much north as west. If anything I got a bit cold in a short sleeve tshirt. Most of the raps did get sun in the late afternoon. This face catches plenty of wind. I would advise a puffy in the early spring or late fall. The bushwhack approach (if coming from Confluence) is heinous, do yourself a favor and wear long pants.