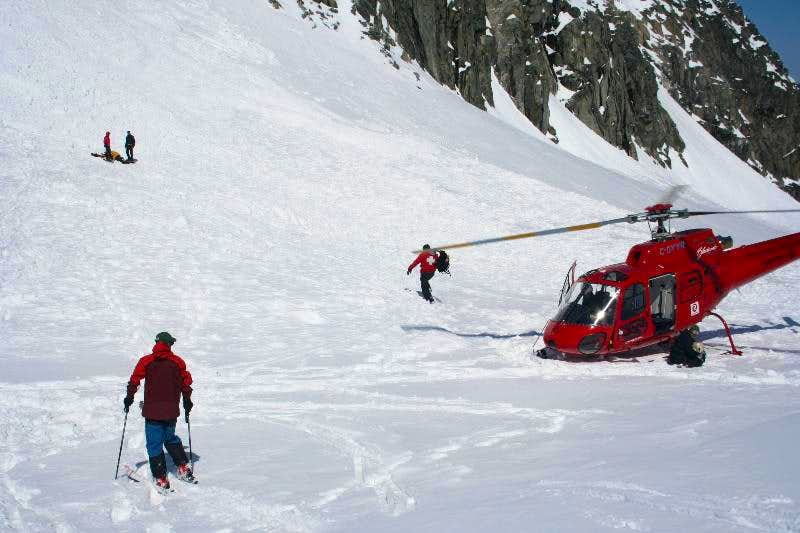 In the spring of 2006 a class 2 avalanche took me down over 600ft cliffs where I ended up broken but alive at the glacier below. This is a picture of the rescue helicopter and I can be seen in a heap amongst the avi debris. When the slab broke loose I knew my life was about to end in a few seconds yet as able to reflect on so much in that breif period of time. I started taking serious body blows as I went over the cliffs but thought perhaps I could pull through and some how survive. I then went over the highest cliff and after counting 1000, 2000, 3000 I knew that much free fall time meant the next hit would be fatal. The blow when I hit the ground was devestating break my leg in two places and bending 2 hardened teeth on my crampons right over but I was still alive and starting to slow down. At this point all the snow that was behind me started pilling up and I thought "you got to be fucking kidding me, I survived falling 600ft only to be buried" Well fortunatley I was only partially buried and the rest of the team scrambled to keep me stable and get a call out with coordinates for a helicopter. I assumed my back was broken as I could not move but it proved to be nothing more than massive bruising allthough a year later I still suffer from back pain but with hard work and time it continues to get better. My leg was broken from being snaped back so hard that the ligament broke away the bone where it was attached and my crampon cut my down jaket to shreds along with a very deep cut into my forearm but who cares about the crampons and jacket right, I am still doing what I love.
« PREV NEXT »