The route Aftonroe became an instant classic as soon as the climbing community became aware of it. The route was pioneered and equipped by two local climbing guides, Mark Klassen and Todd Anthony-Malone. Mostly a steep slab route on super firm and fun rock with cruxes well protected, the whole route is bolt protected and equipped with bolted belay stations at the top of each pitch. This 9 pitch route requires a rappel descent, great half day outing.

M. Klassen and T. Anthony-Malone developed this route on the far right hand side (east end) of the sport climbing venue, Guide’s Rock. The rock is primarily steep and very textured limestone slab. Unlikely most slab rock formations, much of this route has fantastic hand holds with deep incut holds with super positive grip. The cruxes (pitch 3 and 7) either have blank slab sections or slight overhanging bulges requiring delicate slab/friction moves; but don’t mistake this for meaning the route is a sketchy and frightening slab shake fest, the majority of the route has a great amount of incredible holds. The spacing of bolts can be a bit far apart, but all crux moves are well protected. The original ascent party named each pitch, these names are included in the route description.

Some people recommend linking some of the shorter pitches, but we climbed all pitches as individual pitches, using all bolted anchor stations. The set up for bolts and positions for anchors make climbing the full 9 pitches a breeze. We only brought a total of 9 quick draws (we used long draws) and kept the rack nice and light.

The beautiful scene of river, pond and forest below the climb is now called “Backswamp” but in the distant past locals referred to it as "Aftonroe". Local writer and newspaper columnist Jon Whyte regularly lamented this change. Jon died in 1992 and the naming of this route is made in his memory. 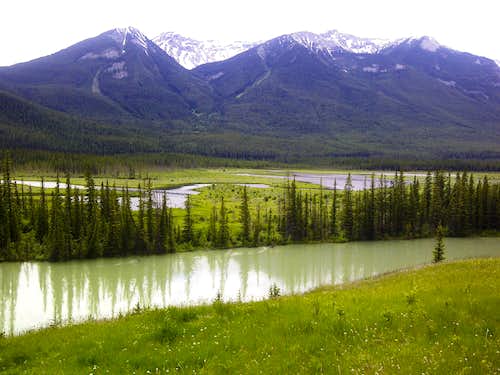 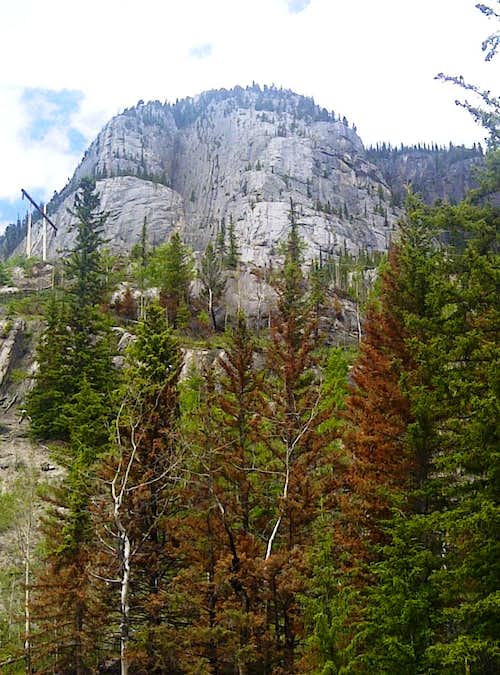 Route from the parking area

P2 5.6, 20 m, 3 bolts: “The Orange Wall” : Climb up the short grey walls past a bolt to a ledge, being careful to avoid looser rocks in a corner. Ignore the rap anchor to the left (the top of For Sure). Walk right a few steps and climb the Orange Wall past a bolt to another corner and a third bolt. The anchor is on the ledge just above.

P3 5.7, 28 m, 9 bolts: Formerly ”The Rhino Horn Pitch” (the horn fall off) now “Waves of Rock” : The T-Bam Crack is to the right (5.9, thin hand to fist size cams). Starts up straight off the belay a bit right past a bolt. At the top of the corner, step up onto the wall beyond. Climb the crux of the route past bolts up steep incuts through the bulging Waves of Rock! At the top a surprising change of character leads to the anchor on the right; in my opinion this change of character is the crux of the route.

P5 5.6, 30 m, 3 bolts: “Rocky Mountain Rambler” : Walk up the slab to a bolt on the short, steep wall just to the right of easy ground. Ignore another bolt (ring) to the right, which is used on descent. Climb the wall to a ledge and then up a short layback crack past 2 more bolts. Continue up onto a broken ledge to a 2-bolt anchor just left of a tree.

P6 5.7, 15 m, 4 bolts: “The Tree Hugger” : Step around to the right of the tree and climb up the steep wall behind it. Liberal use of the tree keeps the first couple of moves to 5.7, not using the tree the rock is 5.8. Continue up easy ground above, past bolts to an anchor at the base of a steeper slab.

P7 5.7, 29 m, 7 bolts: “The Overlap” : Climb up the easy slab past bolts. Find the bolt above The Overlap, clip it, and pull the move. Continue up steepening ground and more hard moves on good incuts most of the way and belay on a ledge.

P8 5.6, 28 m, 7 bolts: “The Gillette Pitch” : Beautiful and super fun handrail right to a slab, understanding how the pitch got its name. Climb up to the anchor on a ledge above.

P9 5.3, 15 m 1 bolt: “To Aftonroe Ledge” : Step left and scramble up to a large ledge above. Very short pitch and not really worth the time or extra rappel, but part of the original route. Admire the view of the valley below, from Rundle to Pilot.

Rappelled off the belay stations for a total of 8 raps, the station from the top of pitch two reaches the ground in 30 metres, obviously you need at least a 60 metre rope to reach safe ground.

70 metre rope makes single rope rappel much easier, but is doable with a 60 metre rope. Double rope rappel often leads to stuck ropes on this route, but can be done. Longest pitch is 9 bolts, we brought 9 long quicks draws.

Belay/rappel device and helmet is a must, several of the ledge have loose pebbles and this is a popular and busy route.

There was a great route description here at this blog linked below, but the site has become inactive. 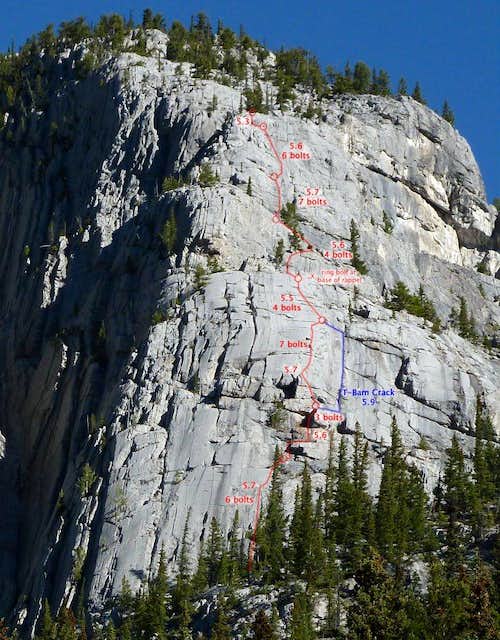