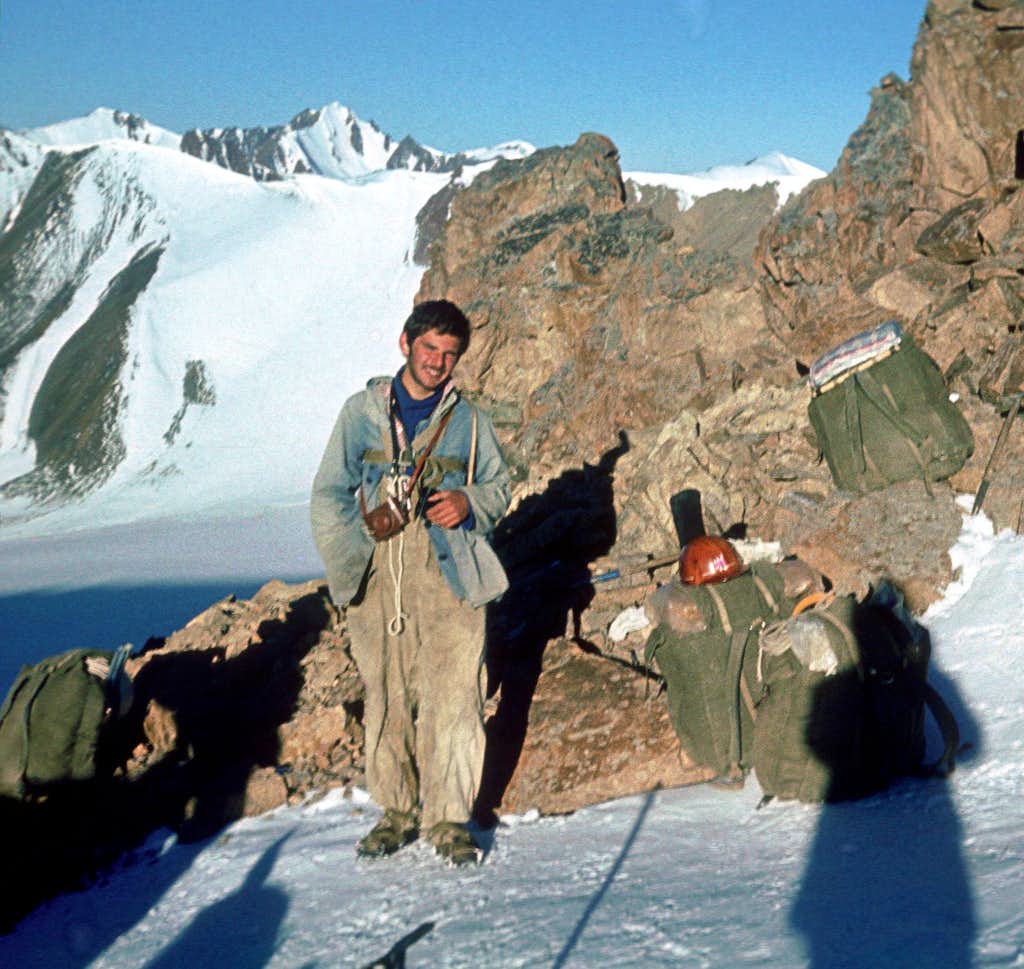 Zaural'tsev Pass, 4100m. The pass is in the Main Crest of Zailiyskiy Alatau Range, the Northern-most of the two parallelel mountain ranges making up the Northern Tian Shan Mountains near the Kazakh-Kyrghyz boundary. The pass leads from Chon-Kemin drainage in the South, up Druzhba Glacier, to Dmitriev Glacier in the headwaters of North Talgar River. August 1980. Note that the backpack, the harness, the crampons straps - everything's made of khaki-colored canvas :)
« PREV NEXT »

in US in the fifties and early sixties--canvas, cotton, steel, heavy wool...

My first backpack was an army surplus job that weighed a ton and hurt to carry. But yet, I was thankful to have it. Times have changed, in the case of packs, for the better.

Abalak ... to a degree it has military roots too

During the WWII the Russians scrambled to contain the Nazi mountain rangers in the Caucasus. The nascent Russian alpine troops preferred to use gear taken from the Germans whenever available. After the war was over, and with some prodding from the Red Army, the copycat gear slowly made its way into mass production.

For example the original "Abalak" backpack (you can see several in the photo above) was a 1950s replica of a WWII German military pack. It was named after Vitaly Abalakov, a famous Russian climber and organizer of alpine training camps, who took part in commissioning of this specific model. But the manufacturers kept cutting corners, producing ever-more substandart Abalak variations, and soon Vitaly Abalakov disawowed the thing. The name stuck though. The last Abalaks were made in the 70s.

The crampons and the top-only harnesses also owe their existence to Abalakov's mass-production push of the 50s, and they were nealy as obsolete as the backpacks when this picture was taken. Trikuni (sp?) vintage boot replicas, too, but they went out of production sooner. I used a pair in May 1980, and they were already turning heads even then.

Re: Awesome Stories with your photos MOCKBA

Thanks! I figured that all the assorted pictures of this series already had long stories, so it would just take a moment to put them together into an collection of tales. So they are in one album together now :)

for the history behind the vitage gear in the photo. I made my first backpack on my mom's old hand-crank Singer sewing machine using old army colored, discarded sofa
upholstery in 1961. It certainly didn't look too different from these packs.