The Ago di Sciora is a striking 3200m high rock pinnacle set in the ridge that divides the Albigna and Sciora valleys in the Bergell area, Switzerland. The last very exposed pitch offers an exhilirating climb and great views of some of the most well known peaks in the area such as the Piz Badile and the Monte Disgrazia.

Although accessible from both the Sciora and the Albigna valleys it is almost never climbed from it's eastern (Albigna) side, a fact explained by the Albigna hut's owner as being the result of people's declining willingness to endure a long walk - in!

The Sciora valley is very popular for the great alpine-sport routes on offer to climbers. One such route is the 'Kaspar Pfeiler' (Kaspar Pillar) on the Ago di Sciora featured in the guidebook 'Schweiz Plaisir Sud'.
Both the British Alpine Club guidebook and the Swiss Alpine Club (SAC) guidebook offer a full overview of all the routes on the Ago from both Sciora and Albigna sides.

Despite it's striking shape and positive mentions in both guidebooks the mountain is seldom climbed to it's summit. The 'Gipfelbuch' (summit log) we found on top had only one other entry for 2007 and the last party before that hailed from 2005! Although a missing pencil might have something to do with this...

The walk - in from the Albigna side is long and tiring. The glacier has receded and a large part has transformed into a rubble field which is tiring to cross. Besides this the snow field which the guidebooks mention should be below the Ago is almost completely gone. Instead, aspiring climbers of the Ago have to hobble over loose rubble and scree to reach the first pitch. The actual climbing is but a minor part of what will be a long 10 - 12 hour day! The normalroute to the summit is accross the south face of the pinnacle and is rated at UIAA IV-. 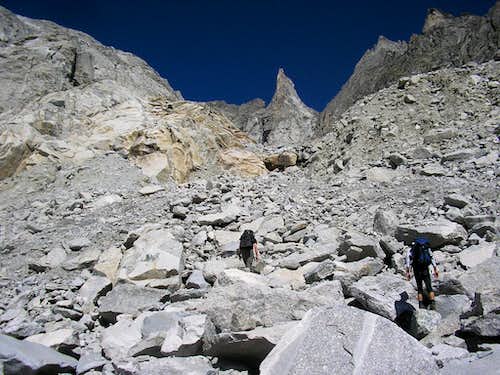 The Ago di Sciora can be reached from both the Albigna and the Sciora valleys. As the long walk in precludes a day trip using the cablecar station from the Albigna side or a walk up from Bondo on the Sciora side it is recommend to stay at the Albigna or Sciora hut depending on the route you wish to climb. The normalroute to the summit is climbed from the Albigna side, for a route description from the Sciora side please refer to a guidebook as I have not been on that side of the mountain.
Climbing from the Albigna side requires either a walk up to the Albigna hut via the large Albigna reservoir or taking the cablecar to that same reservoir. Both the walk in and the cablecar start in a small place called Pranzaira below the Maloja pass, half an hours drive from the nearest large town St Moritz.
There is plenty of room to park your car next to the cablecar station and this parking is free. A return ticket costs 18CHF which is approximately 18 euros (2015). The walk in follows a well marked path of white-red-white markings and starts just along the road above the cablecar station. The path winds it's way through pine forests to emerge just below the northern side of the Spazzacaldeira and it takes about 3 hours to reach the cablecar station at the foot of the Albgina dam.
From the cablecarstation at the foot of the dam take the obvious path up and over the dam and make your way along another well marked (white-red-white) path towards the Albigna hut. This takes another 40 minutes or so. 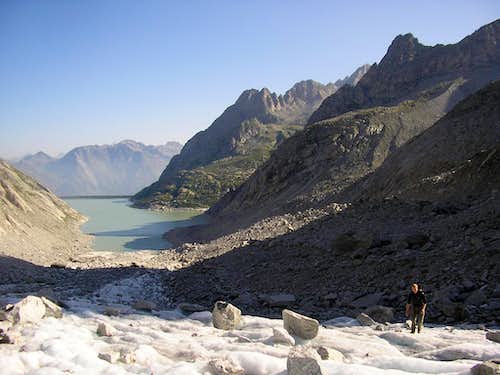 During the walk - in.

The campsite nearest to the cablecar station and the footpath leading up to the Albigna area is called camping Mulina and is located just outside of the small town of Vicosoprano, a mere five minutes drive from the cablecar station.
Camping or bivouacing in the mountains is forbidden in the Bergell as it is everywhere in Switzerland. There are however several very good locations in and around the cablecar station at the foot of the dam.

The route is described in various guidebooks: