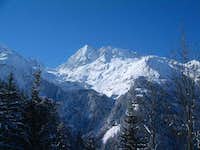 S-Face
Aiguille Rouge is a 3226m high peak in the Vanoise National Park in the French Alps. The peak got its name from the reddish rocks that are visible along the west face of the mountain. Rouge is the french word for 'red'.
The mountain is located in the northern part of the Vanoise NP and is situated just north of the villages of Les Arcs. The route up to Aiguille Rouge is fairly easy and therefore accessible for hikers.
The normal route is graded T4 and the path is always visible. Although Aiguille Rouge sounds like a perfect destination for a great climb it has a dark, very dark side. The north side of this mountain is dominated by the ski slopes of Les Arcs. And worse: A cableway goes up until just under the summit.
One advantage of this may be that due to this cableway there is a marked piste down the mountain. This piste is in fact your marked way up in summer. If you are thinking of climbing this mountain I would advise to climb it in summer, since the ski-masses won't be there at that time.
Well, enough complaints for now. Let's look at the positive side of Aiguille Rouge. For starters, the summit views are tremendous. Standing on the summit you are able to see all the giant Vanoise mountains like La Grande Casse (3854m), La Grande Motte (3656m), Ciamarella (3676m), Albaron di Savoia (3627m) , Sommet de Bellecote and last but not least: Mont Pourri (3779m).
Mont Pourri is actually the higher neigbour of Aiguille Rouge and from the summit of Rouge it is like you can almost touch Pourri, which is one of the finest looking peaks in all of the French Alps. Towards Italy you have a great view towards Aiguille de la Grande Sassiere and of course Gran Paradiso.
These great views and the nice hike in summer make Aiguille Rouge a perfect mountain for a day climb on which the advantages weigh up easily against the disadvantage of the cableway.

Summit view towards the SOUTH 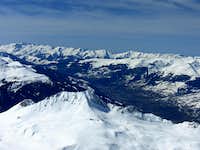 Summit view towards the NORTH
The route to Aiguille Rouge starts in Les Arcs 1950/2000. From here a cableway called Varet goes up until point 2670. This point is of course also reachable on foot from Les Arcs.
From here the trail goes up over a marked path. The route from point 2670 until the summit is shown in the picture below in red. The route goes up the North Face and eventually over the NE-ridge to the summit of Aiguille Rouge. The route is fairly easy and graded T4.
Best conditions to climb are in the summer months. In winter it is also possible but the main problem is that most of the route is part of a skiing slope.

Panorma with Aiguille Rouge on the Right (by Antonio Giani)

Rules of the National Vanoise Park

-No picking, no collecting the animals, plants, rocks and fossils all belong to the environment.
-No loud noise, no disturbance, for the tranquility of all.
-No dogs, not even on a lead, so as not to disturb wild and domestic animals alike.
-Leave no rubbish, no trace of your passage.
-No camping, no bivouacking. Bivouacking is allowed near certain refuges, under the control of the warden.
-No fires. To reduce the risk of wild-fires and to avoid damaging the soil.
-No paragliders or other means of air-transport. Overflying at less than 1000m is also forbidden for the tranquility of the animals.
-No mountain biking. For the safety of walkers and to avoid erosion of the paths. However, certain trails in the Park have been designated for biking.

How to get ther 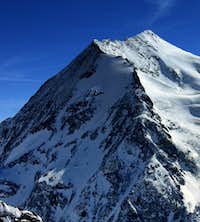 View from the summit towards Pourri 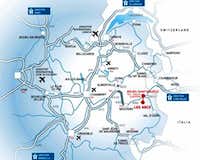 Car:
Take the motorway to Albertville, then follow the dual carriageway as far as Moutiers, a pretty little town at the foot of the mountains. Carry on along the RN 90 to Bourg-St-Maurice. Access to the high altitude resorts of les Arcs is via a wide road (see MAP!)

There are direct TGV trains from Paris and Lille and direct sleeper trains from most of the main cities in France.
If you are coming from London, the Eurostar will take you directly to Bourg-Saint-Maurice, as will the Thalys train from Amsterdam and Brussels.

All of the European cities lead to Bourg-Saint-Maurice! 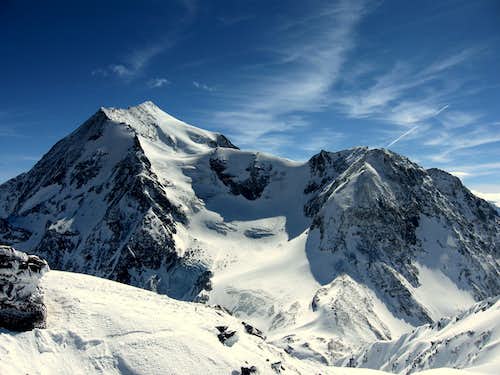 Mont Pourri as seen from the summit of Aguille Rouge