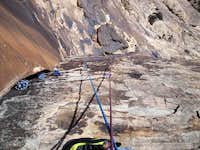 After knocking off several decent, but little known, 5.10 south face routes on Windy Peak, Western Swing and Song and a Prayer, I was enticed to tackle the most difficult rated established climb on the face, Ain’t No Saint (5.10c at rc.com; 5.10b in Handren’s book). I was quite curious about the route in that it was established by folks I had not heard of, Danny Rider and Luis Saca in 1997. One of my partners had opted out on the route a few weeks earlier when I suggested it because Larry DeAngelo had told him, in his opinion, it was sandbagged.

We did not find it sandbagged as much as just plain undesirable for a variety of reasons. The two critical reasons Ain’t No Saint ranks low on the totem pole by Red Rocks standards, are the decking opportunities regarding the two crux pitches (5 and 6) as well as the tremendous drainage issues, running water from snow melt, this route runs into at its higher elevation. The whole idea of Windy Peak’s south face is as a winter destination for climbing longer routes at Red Rocks due to its southern exposure. If a south facing route is constantly wet in the winter from summit snow melt, then that probably defeats the purpose of establishing the route to begin with. If climbing in the Canadian Rockies, running into water is just another day out. However in the desert, climbing wet sandstone at the 5.10 grade or above is not a viable option.

Ain’t No Saint is the second to last route (established as of 2010) to the right on the south face of Windy Peak. All the belays require gear and the route would be difficult to back off without leaving same behind. The first pitch can be confusing via the notes available in Handren’s book and/or on line at rc.com. Depending on where you consider the start will determine the length of the first pitch. Bottom line, if you start at the very base of the face (where it is advisable to leave your packs), then you will run the first pitch a full 200’. I tend to agree more with rc.com beta on the 5.8+ pg versus 5.9 grade in the book on the first pitch. The first pitch is pretty tame climbing, but a bit run out if you are not use to the grade. It takes a sharp left and follows the obvious corner, climbing on top of the corner (thus the lack of pro) through the black varnish to the top of this section (large ledge). The second pitch reads quite confusing if you just had the beta resources we used. Bottom line, head up an easy crack (5.7) that trends left into a mid-5th class gully of sorts. It is best to reset the belay right below an obvious off-width crack (5.9) on your left. I don’t believe 200’ will make it from the large ledge to the top of this crack. Take the crack as your third pitch (5” would make it warm and fuzzy, but I got by fine with a 4”) to the top where you will see a bolt up and right as the start of the next pitch. Set up belay. Follow three bolts over a bad sandstone slab section out right and then climb a fun crack (right option) to just below the first crux of the climb, a potential deck corner leading to a roof pull. Set up belay. Take on the corner with hard to protect moves for the first several meters up to a stout and awkward sloping roof pull. There is a hidden under-cling that makes a big difference in this move. Pull the roof and follow the crack (right option) as it splits out right via a narrow ramp, making an awkward mantle over suspect rock up to a ledge below the second crux pitch (another roof). Set up belay. Take the roof with a bit of decking potential, making an awkward (have I used that word enough on this route?) exit right and up easy ground to the base of the second seam you come to. We found this seam covered by running water. If this is the case, you can down climb and move the belay to the right and climb up an off-width chimney for a full 200’ to the “pine tree ledge”. The next two pitches involve easy ground. Move out left up a short wall which leads into a wet (winter) gully. The original FAers would have you take the right option, but it was covered with running water in January. Take the left V-shaped chimney as an option, shimmying above the water to stay dry for 200’+ (simul-climb to reach a crack) of horrendous rope drag to the summit plateau.

After you get through Hot Fudge Thursday (5.9) and Jubliant Song (5.8), the rest of Windy Peak’s routes are fairly obscure, owing mostly to the approach. It is not much by Canadian Rockies standards, but more than most of the lower 48 will endure for a nine pitch route. Windy Peak is named such for a reason, the upper face is south facing and the prevailing winds from west to east can enter the head space of leaders en route. However, most of this route is fairly well protected by corners and roofs. The descent is also a walk off making the route more plausible despite windy and/or cold conditions.

The general approach hike is the same for all the climbs on the south face. Descend from the trail head looking to gain a trail that eventually circumvents the obvious large pile of brown and red rocks to the right. Descend into a wash from there and attempt to pick up a faint trial that leads up into the canyon. Gain a trail that climbs the left side of the canyon until you reach what they refer to as the “football field”, which is basically a large vegetated plateau that is still separated from the south wall by another peak of sorts. Follow well marked cairns at this point (2010) as they direct you up and right at the other end of the “field”. Eventually gain a saddle of sorts and traverse the slick rock in front of you over to the base of the south face. Jubilant Song is to the left and Hot Fudge Thursday to the right from where you emerge here. Ain’t No Saint is quite a bit below and right of Hot Fudge Thursday. Descend the slick rock to stay out of the bush and traverse left over to the lower face at a corner.

1st Pitch- 200’- 5.8+/ Scramble up the huge corner until you intersect a much smaller one running perpendicular. Start climbing it, eventually climbing on top of it via good varnished rock, but somewhat run out. At the top of the corner, turn left and traverse over to the base of a crack that runs up and left.

3rd Pitch- 80’- 5.9+/ Take on the crack which opens wide into off-width the higher you get. The edges out left are crumbly and a bit unnerving. It is best to utilize as much off-width technique as you can to avoid depending on them. A single rack to 4” seemed adequate protection as far as I was concerned, but a 5” might make you more comfortable on this athletic pitch if you want to carry it along. Belay at the top.

4th Pitch- 100’- 5.9+/ Follow three bolts (the only fixed gear on the entire route) up and right over suspect sandstone slab as you gain a small ledge below twin cracks. Take the right crack up to another ledge below a corner and roof. Book calls this 5.10a, that seemed a stretch.

5th Pitch- 100’- 5.10b/ Take the corner. The first few lie back moves are hard to protect. The crack in the corner ends up large and flaring. Only one lobe of your lower placement will make contact (3”-4”). Start the roof pull by torquing your foot in that flaring crack (watch your pro placements). There is a hidden under cling that will make this awkward pull much easier. Pull the roof and place small gear as you take the right option when the crack splits up and right on a narrow ramp. Make one final 5.10 move on the mantle out of this ramp over suspect rock. Set up belay below the next roof to the right on a nice belay ledge.

6th Pitch- 100’- 5.10b/ Take this awkward overhang off the deck with a decent hand hold but not much for feet. Continue up the crack to a nice ledge running below a wall. The FAers intended for you to take the second seam you come to. However, in January, we found this seam covered in running water. A variation is to down-climb and set up a belay into the off width chimney to the right.

7th Pitch- 200’- 5.8+/ We climbed the chimney variation allowing us to bypass the water run-off. Climb up the off-width chimney to the top and traverse left to the large pine tree on a big ledge. That 5” would come in handy again here if you brought it.

8th Pitch- 100’- 5th/ Climb up the short wall to your extreme left. Continue up onto a flat spot below a V-shaped gully-chimney on your left and a slab exit up and right.

9th Pitch- 200’+- 5.7+/ If the right side is wet, take the left option through the trashy V-shaped chimney, shimmying above the probable pools of water below. Utilize classic chimney technique on several occasions as you continue to the summit plateau. Belayer will have to simul-climb a bit to help the leader reach a 2” crack. I placed little to no gear on these last two pitches.

This summit is a popular objective among scramblers. Thus the descent ridge is nothing more than a hike really. Descend the southwest ridge via plenty of cairns (2010). Once you have descended approximately 1000’, look for cairns leading back left along a bench below a wall that dips and re-ascends to a notch with a large cairn. The earlier you turn left and get below the wall, the less bushwhacking you will encounter. Aim for this notch and descend the other side to the base of the route.

Double 60m ropes are advised, this is an adventure climb of sorts. The book calls for single to 4”, but take at least additional 1”-2” pieces (have to build all stations) and a 5” if this is pushing your normal lead grade. Include your small cams. Plenty of shoulder length slings and a few draws. Biner your trail shoes to your harness for the descent scramble. Adequate clothing in the winter would be advised. Helmets. I would advise against carrying a pack due to the chimney and off width sections.