(Under construction) The Akarnarian mountains are located in western Greece in the province of Aitoloakarnania. Due to the mountains western location the peaks average up to 40 inches of rain annually. The highest peak in the range is Psili Korfi which rises to 5213 feet. The range begins at Astakos and tapers off at the town of Vonitsa in the north. The widest point of the mountains are from Paleros in the west to to the town of Komboti in the east. The mountains are sparsely vegetated, hence the name "Xiromero" or "dry area". Despite the fact that rainfall is frequent here due to the rocky terrain the mountains have a grayish appearnace from afar.

Temperatures in this area vary greatly from summer to winter. Summer temperatures can be exceedingly hot in the noon hours as it can reach up to 40 degrees celcuis on some days. However, due to the western location of the mountains sporadic rainfall can occur every ten days even in the summer time. For example, in August of 2006 the temperature at 3400 feet (the Romvou monasteri) was only 51 degrees farenheit on a cooler afternoon. Winter time in the Akarnarian mountains can be tough as northern winds scour the mountains. Below freezing temperatures are the norm at the higher elevations and snowfalls can be heavy as 4 foot dumps are recorded year after year. Some skiing is possible at the hgiher elevations but only after a really strong storm. Access can be difficult in the winter as the roads dont get well taken care of. Be sure to have a stong four wheel drive vehicle if you want to explore the area in the winter time.

The Mountains
Psili Korfi is the highest peak in the range as it stands at 5213 feet. The Psili Korfi massif is actually a long range that has two other often climbed peaks, Kefalopetra and Ayios Ioannis, both topping out at 4830 feet. Directly north of the Psili Korfi massif is Perganti which stands at 4700 feet. This wide and broad mountain has a radar facility on the summit and dominates the Amvrakian gulf. Perganti accumulates a deep snow base as it is broad as a table and its northern face is gentle which allows deep snow to stack on up. The Vato valley, which has an elevation of 2500 feet, is flanked by Misovouni on the west and Psili Korfi on the east. Misovouni
Misovouni stands at 4335 feet and is a very steep mountain with its east and western faces being dominated by cliffs and rock bands. 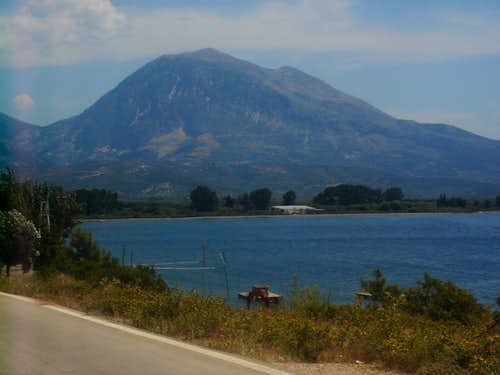 Boumistos.
Directly south of Psili Korfi is Boumistos, the second highest mountain in the Akarnania range. Boumistos recieved its name from the constant lightning strikes the mountain receives during the year, hence the name Boom-istos. Boumistos has an elevation of 1573 meters and its sister peak stands at 1496 meters. 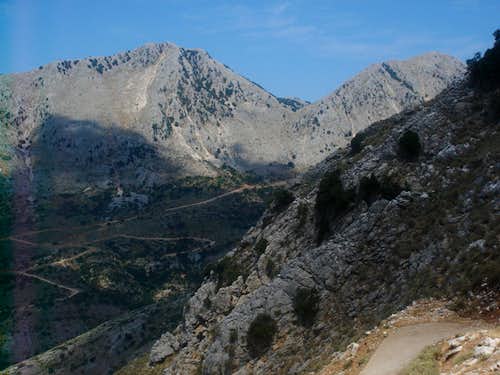 Directly west of Misovouni is Serekas which rises to 1171 meters almost out of the sea as the Paleros Bay is on the west. The steepest walls in the Akarnarian range are found on Serekas, despite the mountain have such a low elevation. The mountain is so steep that a few years ago a German sport climber fell to his death on the steep west face of the mountain.

From Athens it is a five hour drive westbound. Go towards the city of Patra and then take the Rio bridge north on highway E-55. Highway E-55 leads right up to the town of Vonitsa which is a good staging point for the mountains. From Vonitsa go south towards the town of Monastiraki, which is 9 kilometers away. Upon entering this village, take the main road that leads towards the soccer field and signs for the Rmovou will be present. Take a right and follow the asphalt road to the Vato valley which is roughly 15 minutes driving time. The Vato valley is a great staging point for a number of climbs as many of the largest peaks rise from this valley. The mountains of Perganti, Ayios Ioannis, Psili Korfi, Boumistos and Misovouni can all be accessed from the Vato valley. In order to get to the Romvou monasteri it is easy as the only road up the Psili Korfi massif is visibale upon entering the valley. The valley itself is a green and lush grazing area with sheep, goats, horses, cows, and other livestock. The western portion of the valley floods in the winter which forms a wonderful lake.

There is no red tape in this area. Just be careful not to go to close to the livestock as mean shepherd dogs could be roaming in the near vicinity.

Camping is allowed in the area just be careful with the bonfires as the summer months can be hot. There are no restrictions in the area except for the slivestock and the property owned by the locals. The locals are very friendly but dont expect them to know any english so use the maps that I will provide on this page.