Alpine flowers in the Silvretta group

Alpine flowers in the Silvretta group

An explosion of color 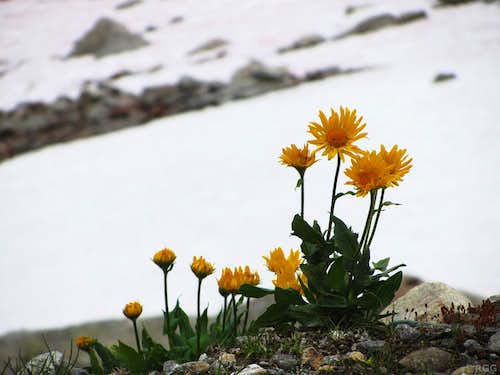 Doronicum grandiflorum(?) braving the snow along the trail to the Saarbrücker Hütte, at around 2400m
The spring of 2013 brought a whole lot of snow to the Alps. By the end of June, it was still possible to ski down in many places where normally there wouldn't be any snow left. I was in the Italian Alps around that time. In shaded places there was still significant snow cover as far down as 2000m, and above 2400m or so, everything that wasn't too steep for the snow to hold on to was white, even south facing slopes. 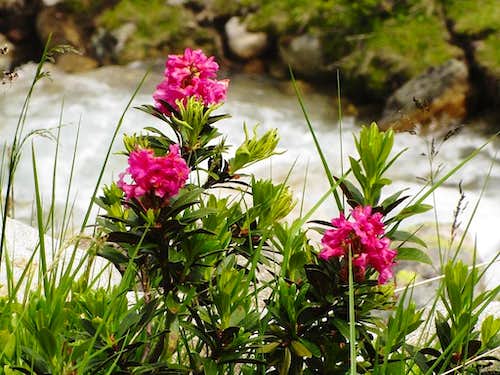 Alpenroses in the Kromertal. There are two closely related, very similar Alpenrose species, Rhododendron ferrugineum and Rhododendron Hirsutum. My guess is that it's the first one, but I'm not sure. It might even be a cross between them.
Not even a month later, things had changed. Large parts of Europe had been enjoying a long heat wave, and while there were still more than normal amounts of snow above 2500, lower down the alpine flora finally got its chance. By then I was a bit further north, in the Silvretta group, and sometimes it was as if the colors exploded around me - and off the small screen of my camera. It was a small, lightweight one, but with lots of settings, varying from "Easy", where the camera did everything, to completely manual. I had only bought it a couple of months ago, and was still fiddling around with all the possibilities. With my previous camera, I already photographed lots of flowers, but often the results where not what I wanted. But I think that, with my new camera, I was finally getting the hang of it. You be the judge...


P.S.
When I could determine which particular flowers I photographed, I added a name. Sometimes the English one, sometimes the full latin one. While I'm not 100% sure about any of these, in some cases I'm pretty confident I've got it right. Sometimes I added a question mark to the name I gave when I had some doubts. And then there were some that I couldn't figure out at all.

If you know more names, or can confirm some question marks, please do add a comment to the photo. To facilitate the determination process, I've given a description of the location or added the coordinates or both, so you can check on the map how high it was and get an idea of the surrounding area.