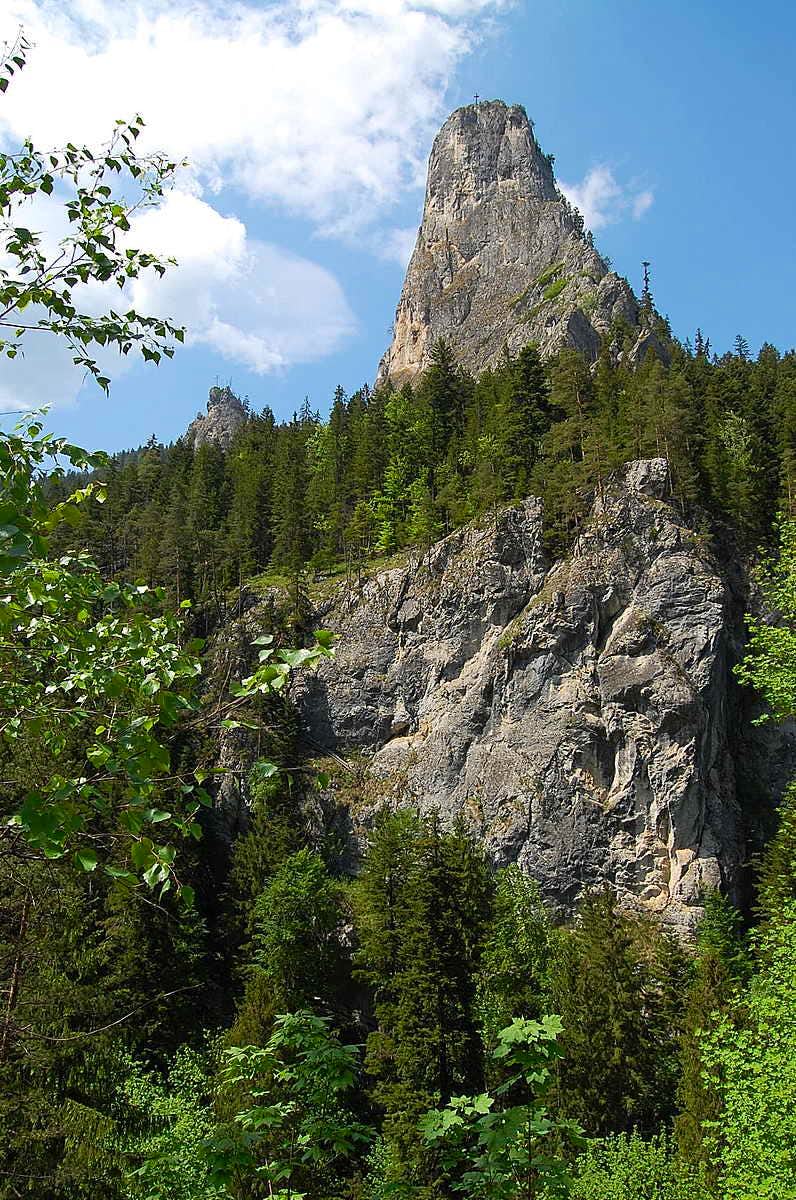 Henryk, thanks for the compliments.
Transylvania is beautiful, indeed...
In communist times it used to be a red star on top of this rock, which did not go too well with the name Altar...:)
Cheers,
Emil

this great rock is here, thanks a lot, Emil! (and the cross is indeed much-much more appropriate)

ancestors would take the cross over the red star any day of the week! Thanks, Emil!

Oltár-kő / Piatra Altarului is a famous rock in the Békás-szoros / Cheile Bicazului ("Froggy gorge"). Its norhtern summit is 1156 m high, its southern summit is 1154 m high. The rock emerges about 350 m from the valley.

Many have attempted to climb it before (including English and Italian mountaineers), but the first successful climb was achieved by two Transylvanian Saxon alpinists from Braşov/Brassó/Kronstadt , in 1934 (8th of September) by Erwin Csallner and Waldemar Goldschmidt. The latter actually did not climb to the very top this time, so he returned next year, on the 8th of July with his mates Eberhard Heum, Alfred Prox and Raimund Sammhammer. This was the second successful climb of Oltár-kő.

The third climb was achieved by Sándor Kreisz in 1941 (15th of June), a 22-year-old man from Budapest, who was originally on a tourist trip in the area. His goal was to put a Hungarian flag besides the already present Romanian one. Within a few days he gathered the essential gear and succeded. His climb lasted from 5am till 10:30am.

The fourth climb is not less interesting, from which one can understand the stamina of Székely people. While all previous climbers used gear (rope, nails, etc.), Zoltán Keresztes, this ambitious 25-year-old Székely (who worked at the road construction in the Békás-szoros) set out for the top without any gear, barefoot (in fact, he did not climb any rock before). After a 3-day preparation in mind, on the 24th of August, 1942, he asked a few hours off from his boss at the construction, without telling his goal (to put another Hungarian flag to the top of Oltár-kő, but this time to a place where it is visible from the valley). He started the climb at 10am and arrived back at 3pm, posting the flag on the top of an 8 m tall pine tree on the edge of Oltárkő, and taking down the wind-torn remains of Kreisz's flag as a proof of reaching the top.

"I've shown the world that the poor Szekler worker is a valuable man" - he said upon his return to his workmates at the construction. He revisited the top next year on the 6th of June, and climbed Oltár-kő 4 times altogether in his life, which ended in 1993 in Gyergyószentmiklós/Gheorgheni.

In 1954 the flag was replaced by a five-pointed red star (a symbol of communism) of 7 m diameter, which was knocked down in 1989 after the revolution. Nowadays a 7 m tall, 2.5 m wide cross is standing on the top, which was erected in 1995 by the local mountain rescue group.

and great history, hope to visit the place some day.

Another interesting compund to the rock's history is that its original name "Mary Rock" has been erroneusly mismatched with the nearby "Altar Rock" just after WW-II, and remained in use as such.

350 meters? What are the technical routes on it like (ratings & how many pitches) do you know? nice photo too.
thanks!

Radek, thank you very much for your comment and interest. I also appreciate the vote (I think the very first on my submissions...). SP-er peterbud has helped me out with giving more in-depth background on some of my photo objects, I hope he can provide some answers to your technical questions, too.
Cheers, Emil

Well, the bare rock part is less than that, but anyway :)

Have a look at these "trip reports" (the text is is Romanian, but you can get the technical info, plus the pics)

Thank you Peter! The photos are great including the route topos (as I'm sure is the trip report...wish I could understand it :)