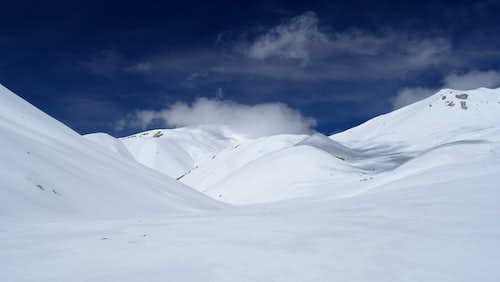 Summit (centre)
Alto Toroni, also known as Sillajhuay (or Sillajguay) which is aymara for 'Sillón del Diablo' (the devil's armchair) is a volcano situated on the Bolivian/Chile border, approx. 50 km west-northwest of Llica which sits on the northwest edge the Uyuni Salt flats

Buses from Uyuni to Llica can be caught from Av Arce (which seems to double up as a bus station) northwest of Av Peru, there are two places that sell tickets for Llica on the right side of Av Arce (with your back to the centre of Uyuni). The journey to Llica can take between 4-5 hours, depending on how much water is on the flats. The journey costs about 30 Bs one way. Once in Llica, there seems to be one or two hostals but by far the main one is Residencial Sillajhuay which is reasonably priced and pleasant (note: there is no internet or cash machines on Llica). Getting to Bella Vista (the starting point for the climb) and about 45 km to the east, is a little more tricky, I was lucky, the people who ran the hostal were making a trip the next day which passed within a few kms of Bella Vista and were kind enough to drop me off for a small fee. Getting back I arranged something with a local of Bella Vista, hichhiking also seems to be an option. There may also be some form of public transport (colectivo) once a day between Bella Vista and Llica.

This is fairly apparent, there is a trail that heads north out of Bella Vista, more or less following a dry river bed, after about 3 km, this begins to bear northwest, eventually heading west towards the mountain (the trail is clear on google maps). Eventually at 4650 meters, there is a sulphur mine (signposted 'Azufrera'), this was deserted when I was there though others have mentioned it can be occupied. I camped a little after this at about 4900 metres. The next day I hiked up the valley, it seemed there was a route that went directly west via Cerro Candelaria to the summit, there is even a path though there was a more distinct path on the other side of the valley that led to a pass of sorts (see photo)- 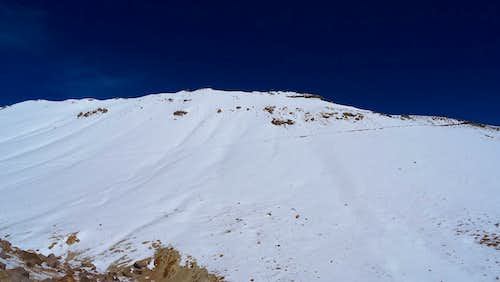 By taking this path (which starts about 5300 metres), you're literally turning your back on the mountain but once at the pass, you turn west again and start heading back towards the summit. Once in this valley, you walk about 1.5 km west, southwest, again, don't walk up the valley that is immediate to you, bear right (even in deep snow, the zig-zag of a path was apparent, there's even a makeshift sign carved in stone), this takes you to a ridge line at about 5775 metres, here the summit becomes apparent and you can more or less follow a contour to the base of the peak, here there seems to be a variety of routes up the final 220 metres, I simply decided to go straight up, reaching the summit at about 1.20 pm.

I climbed late January 2017, there was some snow, I would say crampons were necessary and an ice axe might have been handy. As the snow became softer through the day, it didn't become too deep (i.e. less than knee deep).