Not being the highest neither the most famous mountain of Sierra de Gredos, the Ameal de Pablo is one of the finest peaks of the range. It rises 2.489 mtrs in the middle of Gredos’ Circus and, therefore, it is a perfect tower with views to Almanzor, La Galana, Morezón and all the sharp ridges of the Natural Park. It offers many interesting and exciting climbing and scrambling routes to the single flat granite stone that stands on its top, where, as the legend says, lays the body of the son of Pablo Martínez, a strange peasant that lived in Gredos at the XVI century. Antonio Victory Rojas, José Fernández Zabala, Alberto Oettli and the shepperd Amiano García were the first to reach that point on september 11, 1914. The west spur was first climbed on august 15, 1970 by Luis López, Miguel López and Juan Antonio Soto. 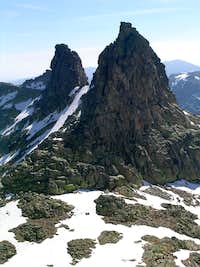 The starting point of the trekking to the Ameal de Pablo (as well as of many other routes in the ‘Circo de Gredos’ is the mountain hut of Elola (2.000 mtrs). This hut can be easily reached over a walking path from the parking place of the park, known as ‘La Plataforma’ (1.780 mtrs). La Plataforma can be reached with private car or with public transport:

The trekking to Refugio Elola goes over an easy wide path (paved with big rocks on some parts) that traverses the northern slopes of the mountain Cuento Alto and descends to the Laguna Grande (the big lake next to the hut) along the western slopes of Morezón mountain.

Ameal de Pablo belongs to the “Parque Regional de la Sierra de Gredos”, a natural area with special protection. Nevertheless, no fees or permits are required to enter the park. Of course, there are all kind of prohibitions regarding the protection of nature in the zone: prohibition to camping (authorities are permissive with this practise, and many tents are seen around the hut and in some other higher areas as well), prohibition to throw or leave rubbish in the park, molestate or pick natural species, make fires, etc…

There are many routes on Ameal de Pablo. Here are some of the most climbed: