An Autumn Trip Through Hell Canyon 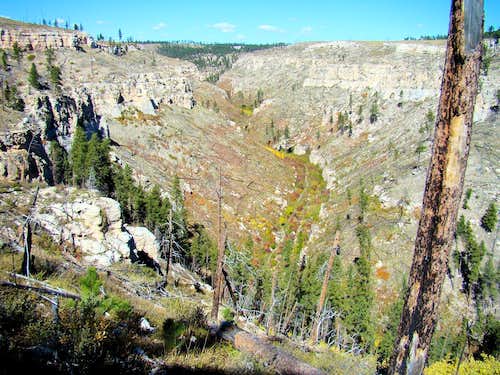 For a long time, I have been intrigued by Hell Canyon, one of the largest and most rugged canyons in the Black Hills. The last time I did any hiking and exploring there was in October of 2013. However, a large and swift-moving thunderstorm forced me to cut short my hike and hurry out of the canyon ahead of a small flash flood that developed shortly after I left. Though I wanted to go back, circumstances have kept me from making that trip until this year (2016). 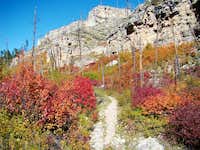 September provided the perfect time for another hike in Hell Canyon, when no storms threatened the day and the summer heat had subsided enough to make the visit enjoyable. Fall colors were flourishing at the time, adding to the day’s enjoyment. So, I loaded up my gear and drove to Jewel Cave National Monument. The Hell Canyon trailhead is located at the northwest corner of the national monument.

The Trail & Ascending to the Upper Rim 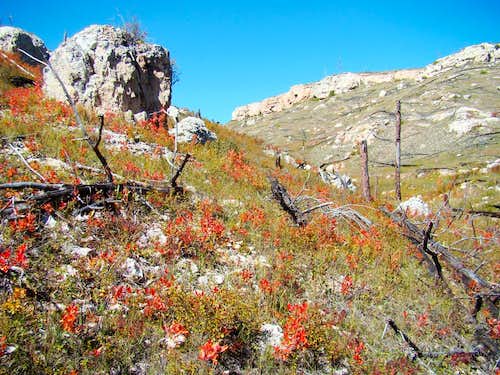 The Hell Canyon Trail, designated as Black Hills National Forest Trail 32, begins in Hell Canyon one mile downstream from the junction of Hell Canyon with West Hell Canyon. Upstream from that branch, the trail follows West Hell Canyon to a sharp bend in the canyon where the trail drops back down to the canyon floor. The 5.3-mile loop route is suggested to be done in a clockwise direction, which is the direction I hiked. Most of the strenuous climbing is over the first .5 mile, climbing from 5,360 feet to around 5,700 feet. After that it is fairly easy hiking, except for tripping hazards and occasional seasonal mud holes. 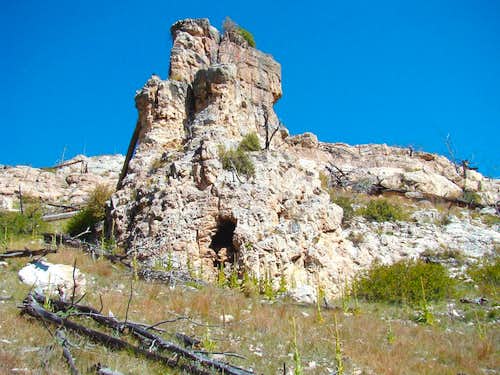 There were lots of great views to the south during the ascent up the trail, but I did not see the small herd of resident bighorn sheep that were in this area during my last visit. There is a natural rock tower that reminded me of some kind of medieval sentry tower. There is a cave in the base of the “tower”. But venturing into unknown caves is not my thing, so I continued on up the trail. 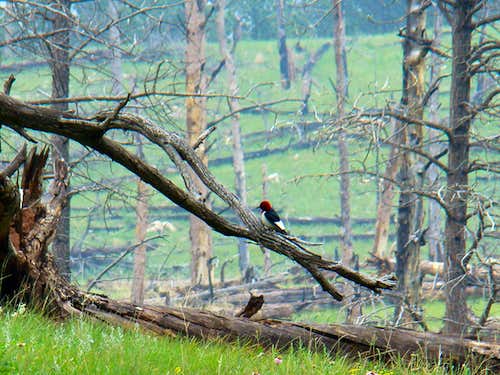 The views of the canyon are pretty much unobstructed because much of the forest in and around the canyon was burned in the Jasper Fire of 2000. Areas previously destroyed by fire now have seen some limited new growth of ponderosa pine and aspen, plus lots of colorful shrubs and ground cover. I was amazed at how many woodpeckers I saw during this hike. I guess I should not be too surprised though, since woodpeckers seem to prefer old burn areas.

Hiking the Rim Side of the Loop 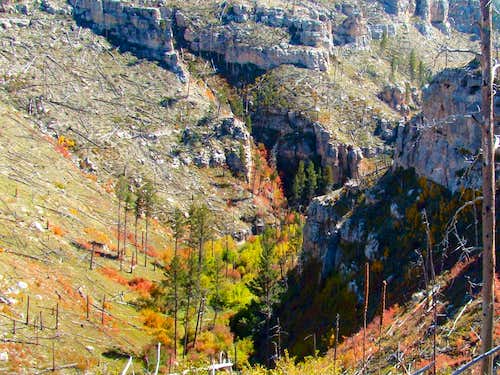 Once the ascent was complete, the trail moved away from the rim for half a mile or so. There is a .3-mile spur trail that provides the only views from the rim in this area. I skipped the spur trail this time because the views further up the trail are better where the trail returns to the canyon rim. The upper part of the loop trail follows a bench below the west rim of the canyon. The entire loop route is open to hikers, mountain bikers and horses. However, the steepness of the canyon sides combined with very narrow stretches of trail is discouraging to many mountain bikers and leads them to find alternative ways around the upper trail. Watching for hazards kept me busy along the whole route. 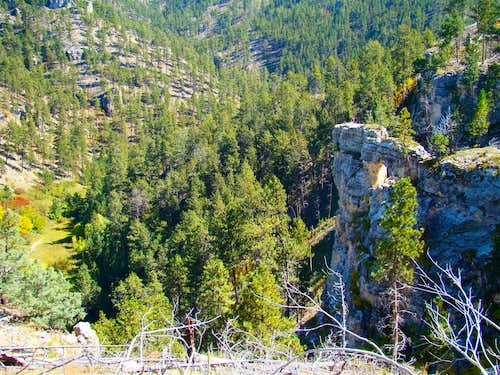 A Natural Window in this Rock Outcropping

The high point on the trail is about 5,800 feet, not far from where the trail loop descends back into the canyon. Near the high point area, looking down the canyon side, one can see a rock outcropping with a “window” in it. It could be easy to miss though, given how much else there is to see.


One of the things I observed was the consistency of horse droppings along the entire route. I also noticed this in prior visits to the canyon and it left no doubt equestrians use the entire trail loop, though the absence of large quantities of those tracks would lead me to believe sighting horses on the trail would not be a frequent occurrence. 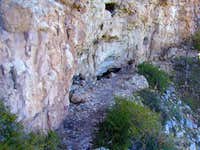 Narrow Trail Below the Rim

Tracks from other animals were kind of rare, though there were some quite large tracks made by a mountain lion under a dusty overhang – probably the largest cougar tracks I have seen in the Black Hills. Thankfully they were not as fresh as other tracks on the trail. I was also kind of relieved to not encounter the solitary lone wolf reported to be living in this area close to Jewel Cave National Monument. There are not supposed to be any wolves residing in the Black Hills. Apparently, this newcomer to the area did not get the memo. 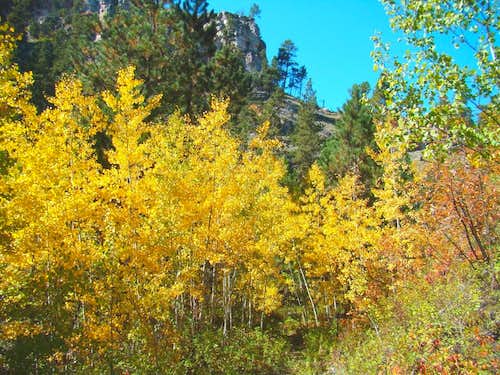 Eventually, the trail on the bench below the rim winds around a sharp bend in the canyon, where hikers will pass through small aspen groves on the way to the canyon floor. The canyon is much narrower here, but widens out once you go back around the sharp bend. There, West Hell Canyon is met by another small branch canyon. 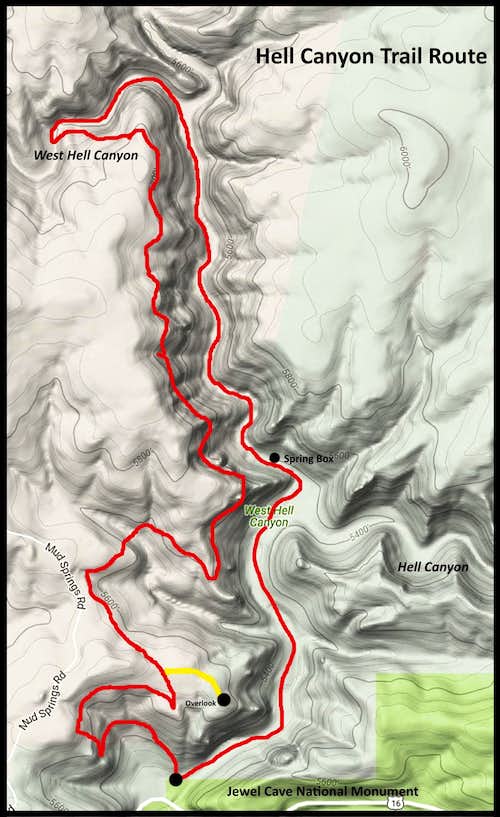 
Though the canyon stream bed is dry in most locations, about .5-mile upstream from the junction of Hell Canyon with West Hell Canyon, there is a series of small springs that develop into a small flowing stream. Upstream from the series of springs, there is an old iron gate lying in the stream bed. Below the springs, there is a concrete “Spring Box” (so labeled on the forest service map), some sort of tiny building made of concrete and a short section of asphalt that the trail passes over. I believe this is the area in the canyon where the old CCC Camp was located back in the days of the Great Depression.


The junction area for the canyon’s major branches is not readily apparent as a junction because of the bends in Hell Canyon and how the heavy forestation in that area obscures the view of the main branch. Some maps show an old forest service road through Hell Canyon to the junction area. About all that I could discern of that old road was the grading of the road bed which is now heavily overgrown with grasses. Still, the main branch of Hell Canyon is open for those who care to venture up that branch. 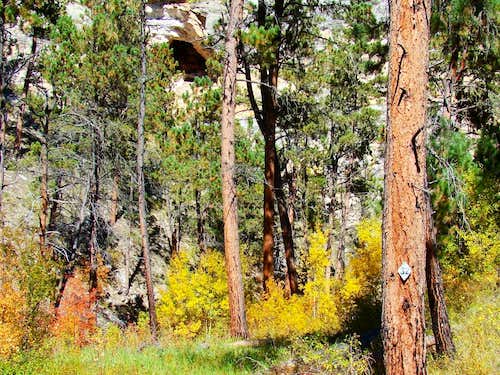 I noticed many caves in the walls of Hell Canyon. Some of the caves are only sizable enough for small animals to enter, while others are substantial enough for larger animals. The entrance to Jewel Cave, the world’s third-longest cave, is just .5-mile downstream from the Hell Canyon Trailhead. Since many of the caves in Hell Canyon are shallow, it’s safe to say that most caves in the canyon walls are not connected to Jewel Cave. However, many speleologists believe the known area of Jewel Cave may only represent about 10% of the true extent of the cave and its many branches. So venturing into one of the deeper caves could take a person much further than they might expect. 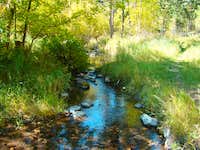 Once I was a short distance past the junction area of the major branches of the canyon, I noticed the small stream had disappeared and the canyon seemed to be widening a little. Compared to the trail near the rim above, hiking the canyon floor is a whole different world, especially in the autumn when all the ground cover changes from shades of green to varying shades of red, yellow, orange, burgundies and even purple. When I arrived back at the trailhead, I was sorry the hike was over, but grateful for such a great opportunity on a perfect weather day. 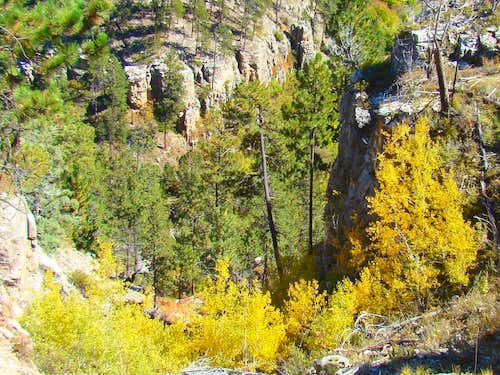 For anyone who would like to explore Hell Canyon, the trailhead is just 13.5 miles west of Custer on Highway 16, or about 1 miles west of the entrance to Jewel Cave National Monument. There are no permits needed. The forest service regulations are posted at the trailhead. For additional information, check out the links below.

area. Looks like you picked a great time to go. Good report and photos-really enjoyed it!!

Thanks for checking this out and for your comments!