An awesome view of Tijeras... 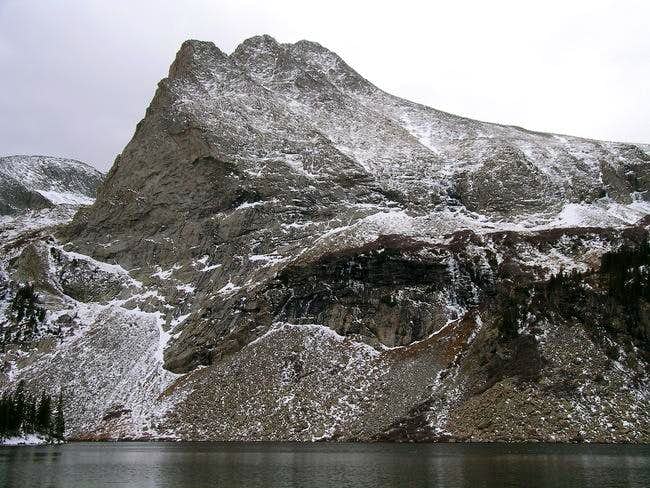 An awesome view of Tijeras Peak in October from Lower Sand Creek Lake. Music Mountain on the right.

Tijeras in October would be challenging ascent, the cliff band that runs below the upper slopes is typically choked up with ice and snow.
« PREV NEXT »

How'd it go in Sand Creek this week, Kane?

.Not so good. Weather was calling for 20% precip, so it surprised Jim and I to see the clouds build up as fast as it did around noon on Sunday. It was also very windy. There was about 6-8 inches of consolidated snow all the way up to the lake. We found a few dry spots around the lake and set up camp in hope that the next morning would bring us some blue sky and less wind. By this time there was significant cloud cover, and our day would not include an ascent. We were really up for it(that approach seemed short and easy) but the weather was worsening.

At 5:00 pm it started snowing. At 6:30 it was time to get in the tent because of the wind and snow. We stayed optimistic, but in the end after 12 hours of laying in a bivy, we woke up to more wind, light snow and very cold temps. Both Tijeras and Music were completely socked in. It snowed maybe 2 inches over the night but it was really windy. We decided it was in our best interest to pack up and head on out and maybe we could run up 12,739 from the pass.

At the pass the wind was fierce and all the mountains were still socked in, we passed on a summit attempt and chalked it up as bad luck.

Thanks for the timely Music Mountain beta, that east ridge doesn't look as bad as i envisioned, although the summit ridge looks interesting. Next year let me know if your heading down there for either Pico or Music, I would love to join up and I would guess Jim would to. Nice area worth visiting again

crummy.... shows what I know about Tijeras, eh? I didn't figure it'd load with ice so soon. I'm sorry you guys didn't have better luck, but now you know it's an area of the Sangres that's not to be missed!