Andersdalstind lies at the head of two valleys called Andersdal and Lavangsdalen.  It is a prominient peak with no approach.  Because of this, it is a popular peak for Randonee and Telemark skiers, as well as hikers.  The ridge climb to the summit is clean and simple to follow with only light scrambling, and the 'gryte' or bowl for the ski descent is marvelous.  Andersdalstind is just across the valley from Blåtind, and is higher and steeper than it's neighbor. 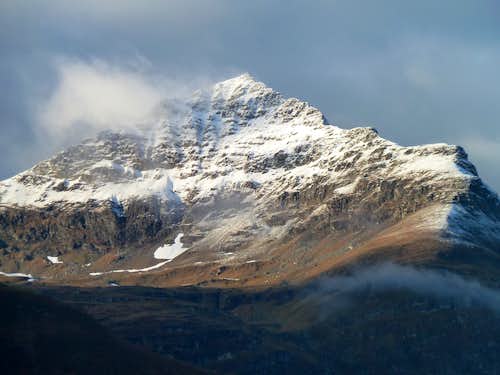 From Tromsø:  There is only one highway that goes to the rest of the world from Tromsø, and that is E8.  Start on E8 from Tromsø, drive for about 40km.  This will place you in Lavangsdalen, where, as of 2013, major highway construction is taking place.  The parking situation is fluid as the widening project continues throughout the summer.  I will update as new developments occur.  As you are driving from Tromsø, Andersdalstind will be the last mountain on the right before leaving the valley and driving to Balsfjord.  There has been a section of old highway with parking for around 15 cars, but it will soon disappear under the new construction.  As stated, there is no approach to Andersdalstind, and no bushwacking, unlike most peaks in this area.  Find a use trail that starts up after about the first 20 meters of flat walking.  Be careful to not take the use path that leads to the low pass between Andersdalen and Stortind.  The climbing path heads left rather soon, the pass trail continues straight and is closer to a large stream. 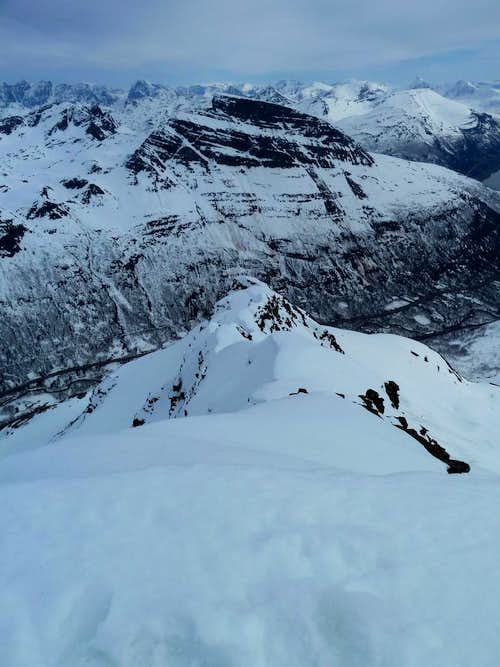 East ridge of Andersdalstind. Blåtind in the background, on the opposite side of Lavangsdalen. Taken from the summit.

There are only 2 commonly used routes on Andersdalstind, the ascent of the north ridge, and the ski descent of the north facing bowl.  Hikers will descend the north ridge as well.  2 other ridge climbs are possible, though I havn't found any information on them as yet.  The east ridge starts straight from the highway, and is steeper and exposed, and probably contains 4th class sections.  The SW ridge is a little more hidden, and could be used as a traverse from Snømannen, the neighboring peak, but it looks steep and loose, with several gendarmes blocking easier progress. 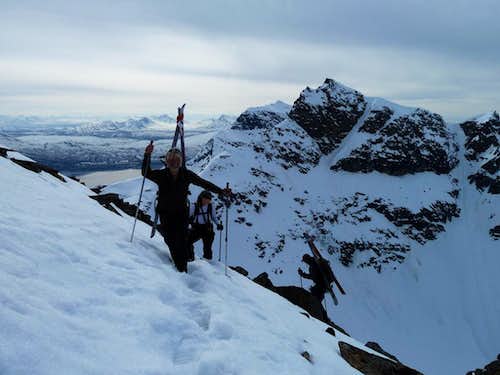 Carrying skis up the final section before the summit.

Summer hikers of the ridge can usually start in mid to late June when the ridge is free of snow.  First snows come in mid-October.

Skiers can look forward to a long season on the northern bowl.  Although a few try, the 2 months of darkness and the unconsolidated snow of early season usually mean that skiing doesn't start until February.  But the season lasts usually until mid-July.  Late April and early May is perfect for Andersdalstind, and it is very popular from the easter holiday until mid May. 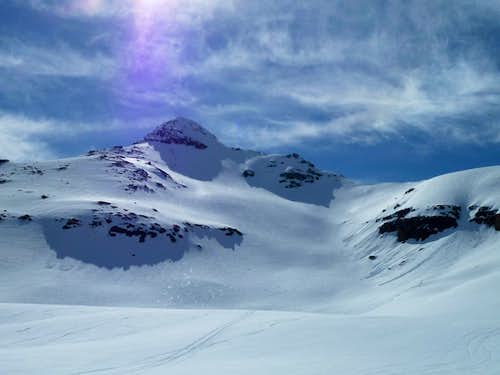 North Bowl of Andersdalstind in May conditions

Avalanche:  The north facing bowl is usually stable, without a lot of wind slab build-up.  But when it it does go, it is massive, and cleans the entire bowl from top to bottom.  Most times this has occured in the first really warm days of spring and summer.  In the past decade this large avalanche has released, on average, once every 3 years.  Assesment of conditions is critical.

Guidebook Andersdalstind is covered in the ski-mountaineering guidebook by Espen Nordahl.  Description in English and Norwegian.  I cannot recommend this book enough to the visiting telemark or randonee skier.


Kugo 666 An instructive series of photo's, a simple topo, and Norwegian text.

Youtube vid. A note on this video.  Don't be put off by the scary entry point to the north face as is shown on this vid.  There is an easier entry just a short downclimb further down that is more commonly used.