Guiding up to 20 tourists to the top. Great day.

after an aborted 1st attempt due to going too high above the Portillon, Ken & I found the gateway on the 2nd visit.

My third time. Each time the glacier is smaller and more rocks to climb. Some small rock avalanches, one across the glacier path. 6-7 hours up and 6 down.

Another visit to summit

It was my third time in the summit. We climbed also the aguja Daviú, aguja Escudier and Espalda de Aneto, small peaks of three-thousands of the list of UIAA.
The glacier was very hard with ice and the approach from portillon superior to glaciar was horrible with a lot of stones. We needed 6h to reach the summit (and some people need even 7h). September is not the best season to reach the summit (it's better in Spring with more snow) but it's the best season to climb the rocky ridges without snow.

Done from Rif Renclusa. Went a bit too high and had to lose a lot of height to reach the glacier but got to the top in the end. Confident of my skills but I do suffer with big drops so the final few steps were terrifying. Loved it overall

Bus to Besurta and and normal route to the summit in one shot. Clouds and fog until 200 m below the summit. Then above the clouds and AWESOME views. Decent via Forau d'Aiguallut. We were able to walk on snow all the way down to 2.700 m allowing for a speedy decent. 10 hours for the whole trip.

Climbed with Ludwig via Salenques-Tempestades. Nice route, mostly 3rd and 4th class with sections up to 5.7 maybe, very long. Route finding is simple, mostly great rock especially on the harder sections but many sections do require care and at times when most people won't use a rope. Very windy but forecasted rain held off until about 10pm while we were sipping local wine in Benasque. The descent was surprisingly long.

Gear list: trainers with rock shoes for about 5 or 8 pitches. Camalots 0.5, 0.75 & 1.0, 5 slings, 8-10 draws. Set of nuts not used. Most anchors were single slings. Crampons and axe not needed but there was a lot of snow on descent and a bit on approach.

Again and over the Mahoma Bridge

Nice day, the glacier is getting smaller and smaller so more and more rock comes out. We were a group of 3. No big problems, just quite a long and sometimes slow climb.

Here is my GPS route, the start and end were manually edited as my phone did not have enough battery for the whole trip. http://runkeeper.com/user/valugi/activity/225889196

Almost to the top

Heavy fog, very rainy and solitary. I turned back on big crevases on glacial.

Great views up here during the gaps in the cloud. Took quite a long route up this one.

Got on top with a group of nice Spanish people guided by a Barrabés guide team.

On our second attempt we made made the summit via Renclusa and Portillon Superior. Beautiful hot day on the summit.

nice trek, but the bullrun in pamplona afterwards was more fun... 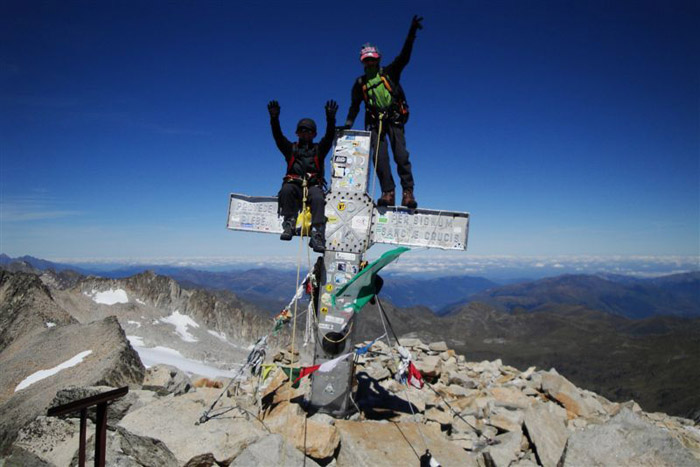