We had the opportunity for a 6 day trek with Shepherd Adventure Trekking & Expedition to Annapurna Base Camp (ABC) in January of 2022. While I never really considered trekking as my preferred way of experiencing the mountains - I tend to prefer more technically challenging endeavors - the opportunity to trek in the Himalayas was an amazing experience and I now cannot wait for an opportunity to go back. Pictures really cannot do justice to the grandeur of the mountains or the lives of the locals living in these villages - I hope that sharing a few of our 1000+ pictures taken during the trip will provide readers with an idea of what to expect on a trek like this. For our trek, we had both a guide and a porter from the village of Chomlong on our route. Reflecting back, we could have done this trek independently and without guide and porter, however, having local guides who knew everyone we encountered along the trek starting from Ghandruk all the way to Annapurna Base Camp, provided unique insights and experiences that we would not have had on our own. Further, our available time was very limited and thus we opted for a short ABC trek. If more time is available, I highly recommend spending more time trekking through more of the lower lying villages such as Ghorepani, Landruk, etc. Experiencing village life and seeing the mountains from afar was more meaningful to me during the trek than the time spent higher up on the mountain where the views are more limited and only those working at the guest houses live. (Disclaimer - due to Covid, the trails were exceptionally empty which was great for us, but poses a significant economic hardship for the local population which relies primarily on tourism and subsistence farming).

We flew from Kathmandu to Pokhara in the morning and then were able to take the Jeep all the way to Ghandruk where we arrived mid-afternoon on Jan 10th. Afternoons at this time of the year are typically cloudy and we experienced a few hours of rain. We were able to hike through town after the rain and what surprised me the most was how fertile this region is. People can grow most everything that they need year-round. 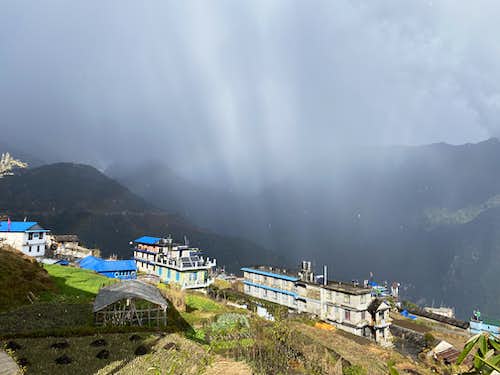 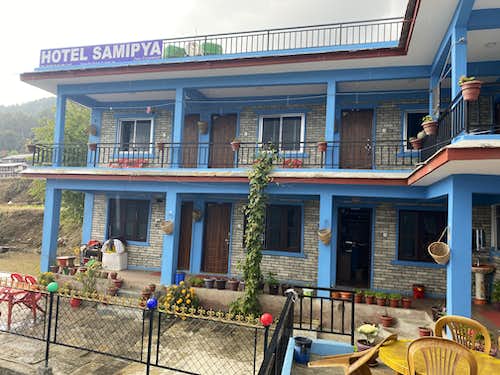 Sunrise provided us with the first opportunity to see Annapurna, Annapurna South, and Fish Tail. We had a room with mountain view and it was amazing how far upwards we had to gaze to see the top of the mountains. 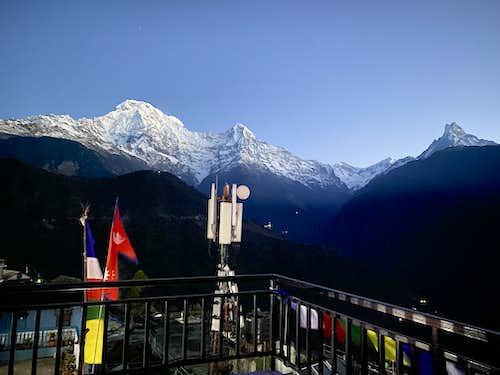 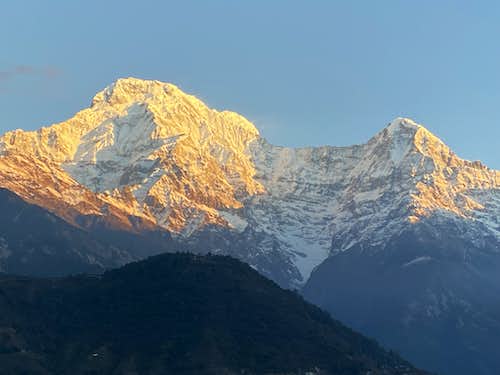 After a great breakfast, we spent most of the day hiking from Ghandruk up to Komrong Danda, down to Kimrong (1800m) and Talung where we had lunch with some friends of our guide and porter, and then up to Chomrong. We hiked most of the day at a very comfortable pace and stopped for regular breaks, lunch, and tea. Along the trail, we encountered countless steps and quite a few water buffalo, donkeys, etc. The amazing thing along the way is that everything that one sees has been carried up the mountain by porters (building materials, steps, ...) or pruduced by the locals from the mountain. The locals were very friendly, extremely hard working, and resourceful. 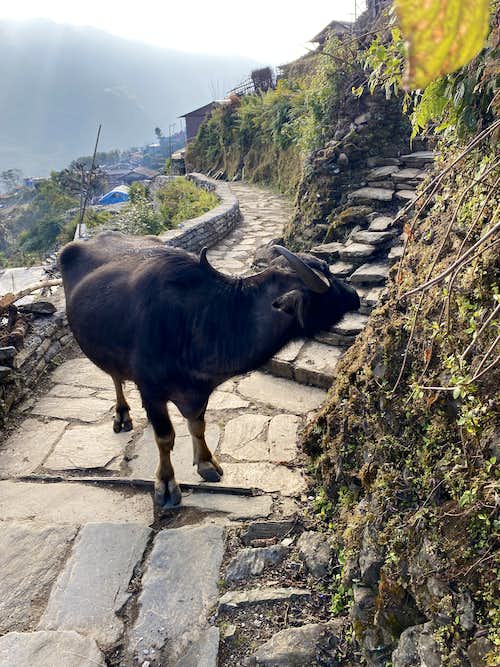 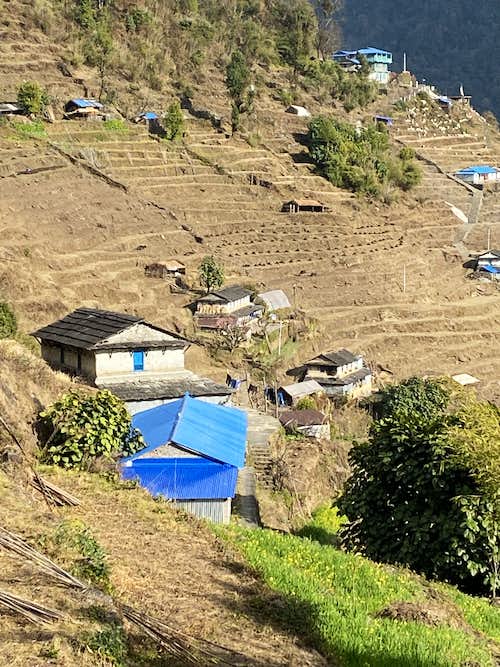 In Chomrong we stayed at the Kalpana Guest House: 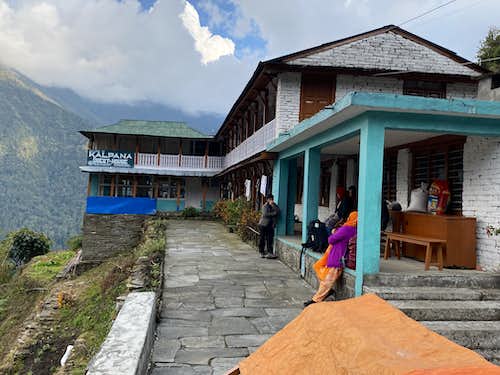 The morning views of the mountains from our Guest House in Chomrong where absolutely amazing. 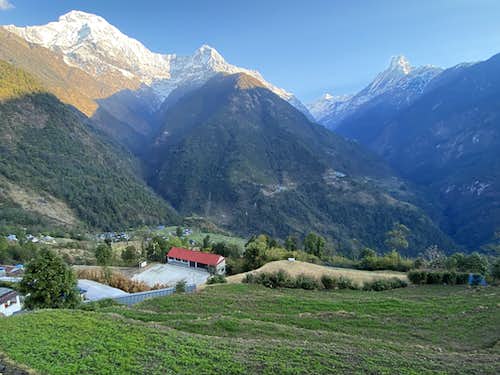 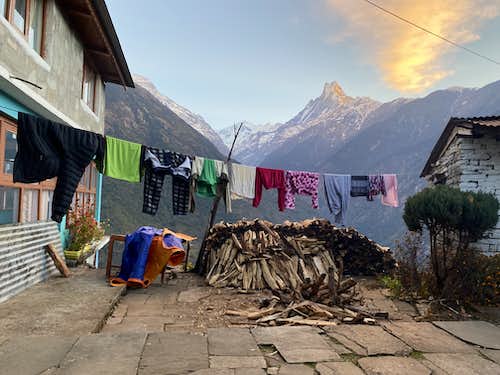 We started our day by hiking from Chomrong to Tilche, which included about 2000 steps downhill through the town of Chomrong. In Tilche we had tea with our porter and his family and were then joined by our porter's wife for the remaining trek to ABC. Trekking to ABC had been a wish of hers when they got married 16 years ago - now was the time. 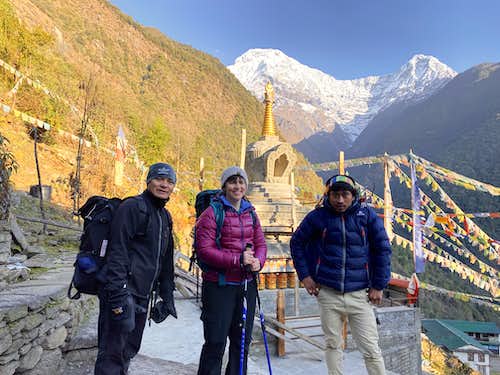 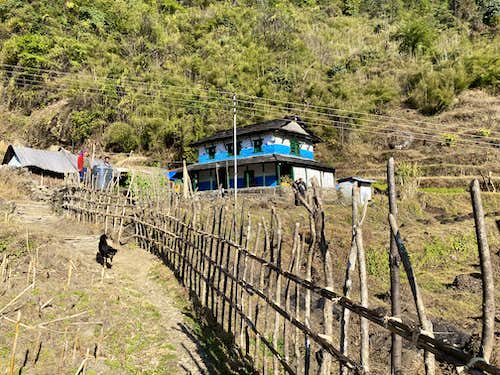 From Tilche, the trail continues on countless stone steps up to Sinuwa (great views there - last normal village) and Khuldighar. Then down to Bamboo (donkeys travel up to Bamboo - after that only porters. Also no beef allowed past Bamboo). Then up to Dovan and Himalaya, our final destination for the day. Once one enters the canyon, after Sinuwa, the views become much more limited until one reaches MBC and ABC towards the end of the trek. We passed through some amazing bamboo forrests (saw a few mountain monkeys) and were surprised by some hail/snow. 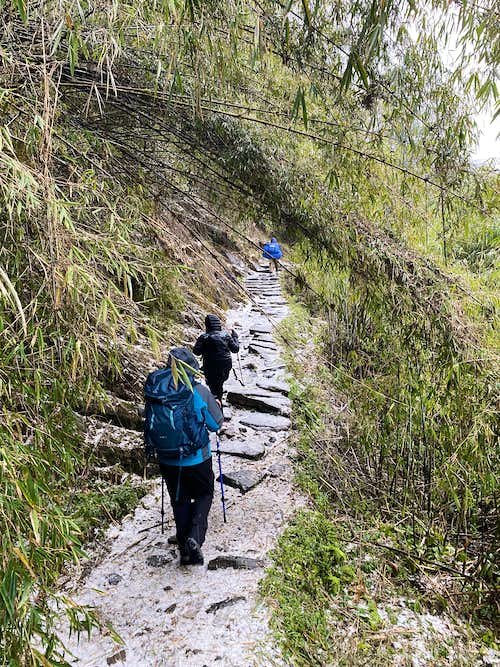 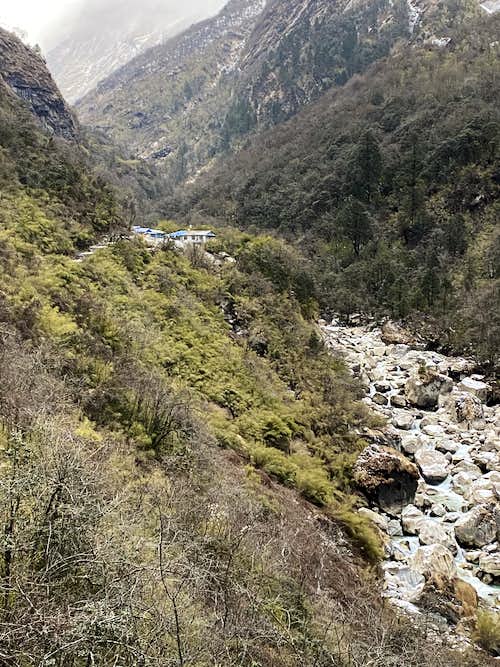 We arrived at Himalaya close to dark and met 2 trekkers from the UK (finishing the Annapurna Circuit Trek) and 3 guys from NY. Our plan for the next day was to travel the short distance (4h) to Machapuchre Base Camp (MBC) rest, and see the sunrise at ABC on the following day. The two other teams left early to hike all the way to ABC and back to Himalaya on the next day - allowing them to travel without backpacks but resulting in cloudy views of the summits from ABC. (Side note - all guest houses had beds, blankets, pillows and the option to pay for Wifi, hot showers (sometimes bucket showers :)), etc. 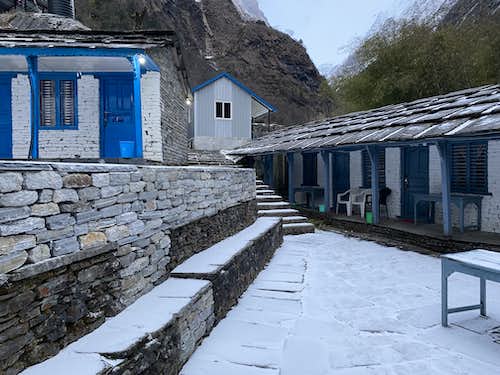 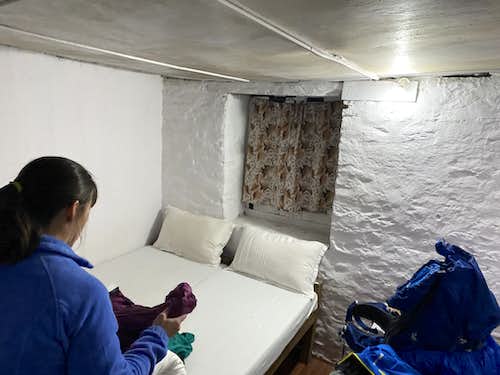 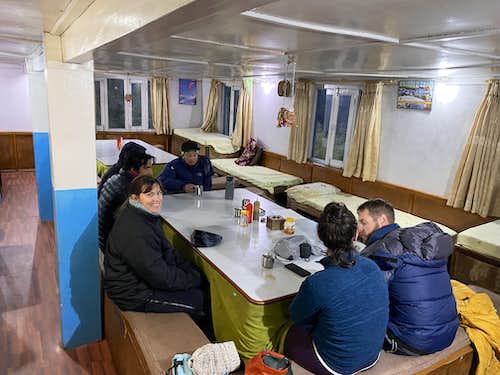 As mentioned previously, Day 4 was a shorter day for us. The snow was covered in an inch or so of snow starting from Himalaya (during the spring/fall trekking seasons, one typically does not encounter snow until reaching ABC) and we wore traction devices (Nepali version of Yak Traxs) for the remainder of the trek. Our first stop after leaving Himalaya was Hinku Cave. After Deurali, we crossed the creek to take the longer but avalanche safe route. This turned out to be unnecessary as there was no snow on the avalanche slopes, but better safe than sorry. 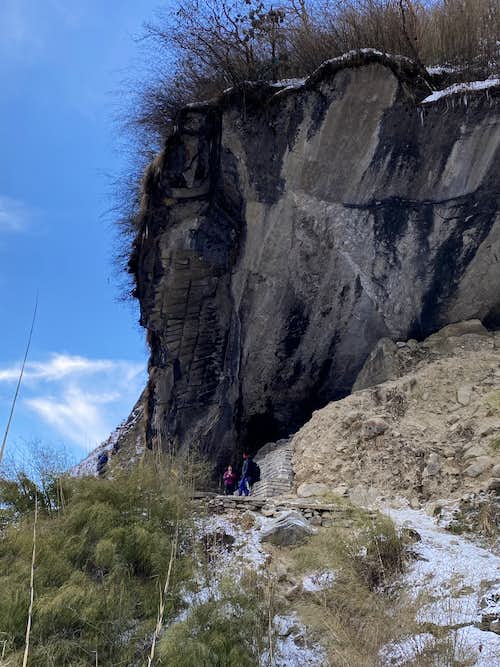 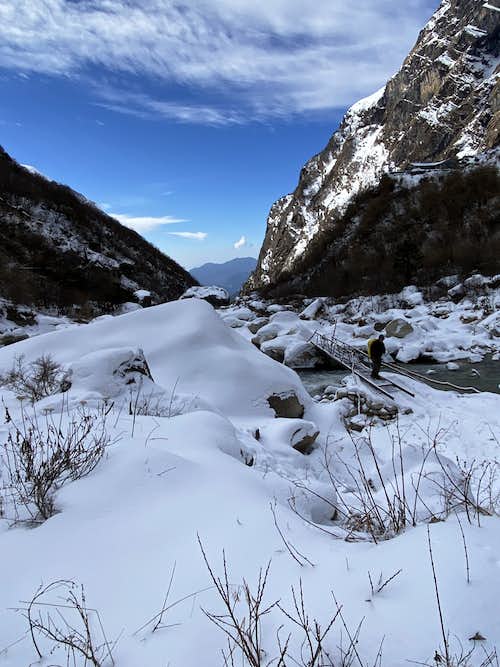 The remaining trek to MBC was through a beautiful winder-wonderland. 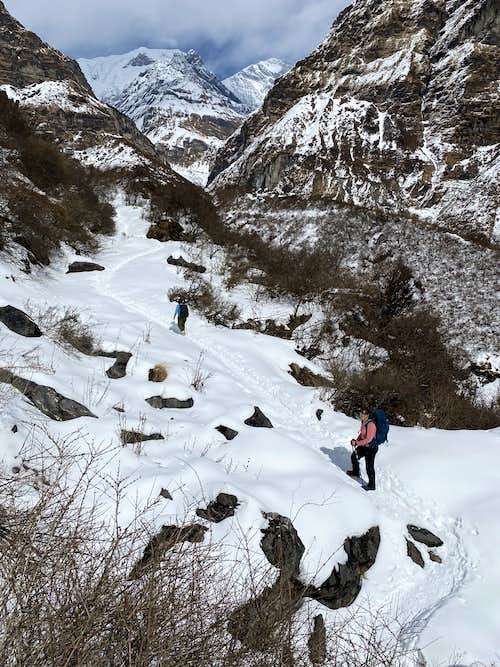 Temperatures at MBC were rather chilly (-15C) with no heat. Having arrived around 12:30pm we bundled up, but it got progressively colder. At 4:30 our porter and I decided to run to ABC to see if we could warm up and catch some sunset mountain views - with moderate success. We got some good sunset views of Fish-Tail and partial views of Annapurna. 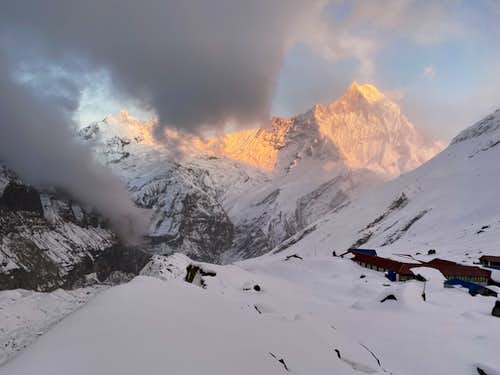 Day 5: MBC to ABC to Tilche

We left MBC at 5:30am in the dark to reach ABC for sunrise, which was absolutely spectacular. 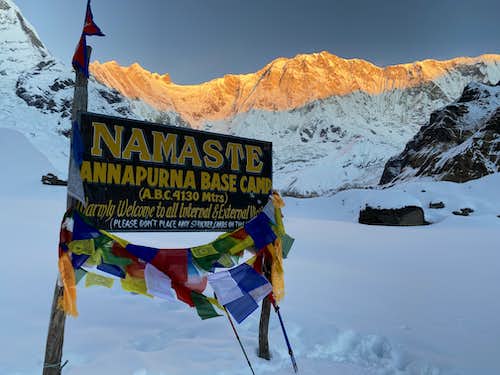 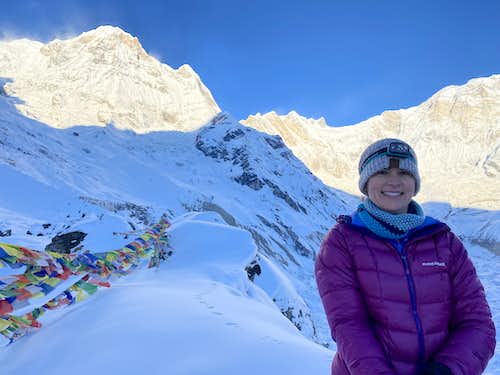 While our original plan was to hike down to Dovan, we decided to make the long trek all the way down to Tilche. This allowed all of us to participate in some of our porter's and guide's Saturday morning family activities. It also allowed our porter's wife to head down to town to pick up the older kids from boarding school which was being closed for 2 weeks due to Covid. On the trek down we were introduced by our guide and porter to Nepali chocolate (be careful) and finished with dinner on our porter's front porch: 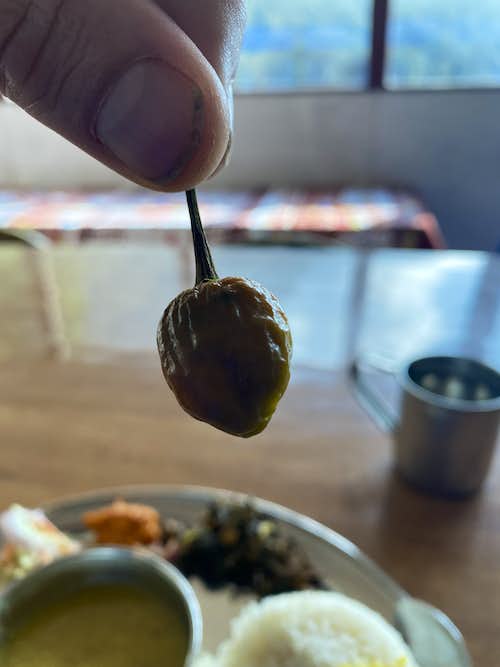 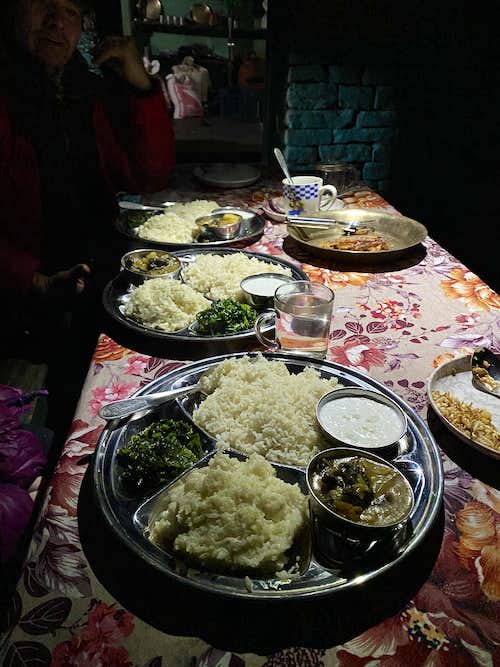 Day 6 was a shorter hiking day as we spend the morning participating in family and community activities in Tilche. We then made the 2.5h hike to Jhinu, which included climbing the 2000+ steps up to Chomrong. For this trip, our porter decided to borrow his sister's horse to carry the load and to allow him to return to Tilche that night in order to watch his children. 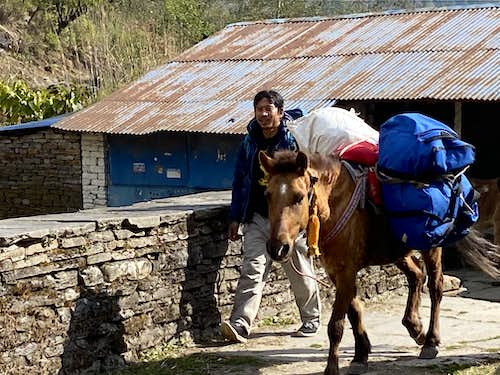 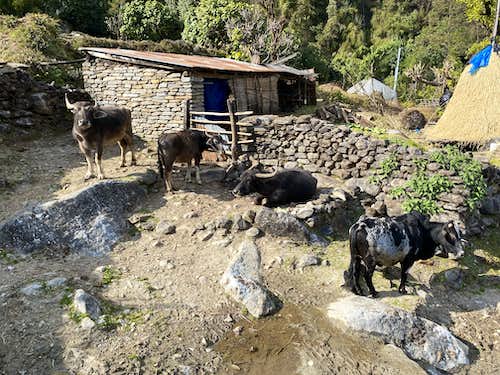 From Jhinu, we headed down to the hot-springs. Honestly, I had expected more. They were luke-warm and slimy, but still felt nice after several days of trekking. 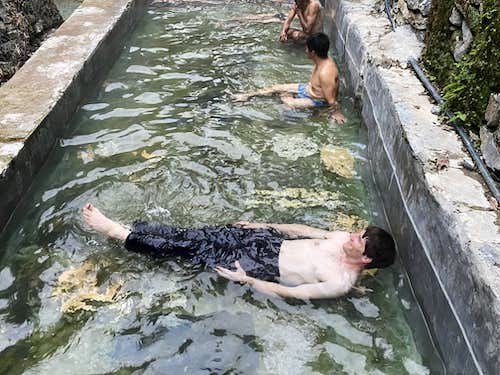 The final trekking aspect of day 7 was to cross the 285m long hanging bridge to get to our Jeep pickup spot. 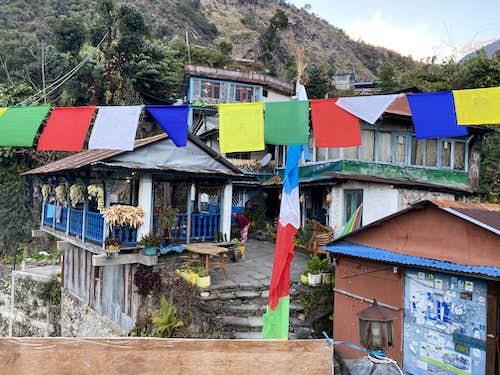 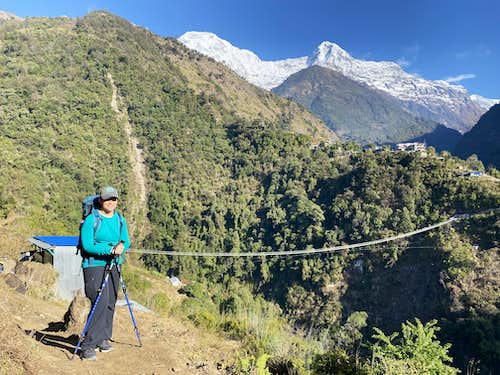 Having read mountaineering stories about early expeditions to Everest, Nanga Parbat, .... and many of the other Himalayan mountains, this trip was a dream come true. It also opened my eyes to the many possibilities with trekking as it opens up opportunties for a variety of ability levels. To make things easier, one can add a few days and shorten each days distance or have more porters to carry everything. To make things more challenging, one can always add some side-trips or extra daily distance. While I could have physically completed this trek without guide and porter, having a local guide and porter made this trip special and I highly recommend using a local guide and porter for trips like this (also, the relatively small additional cost - after airfare, etc. - provides much needed income to these people in the Nepali villages). I hope to have other opportunities to return to Nepal for more treks.

Did this trek as part of a longer trek in fall 1988. Thanks for the memory recharge. Did you spend the night in Hinku Cave?