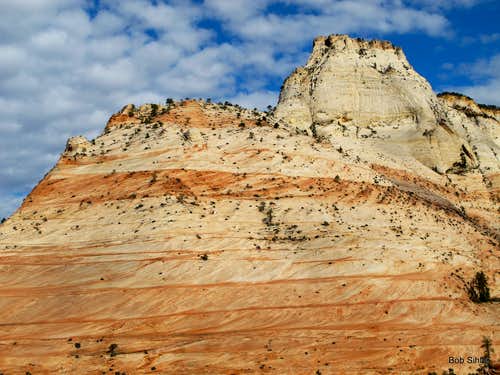 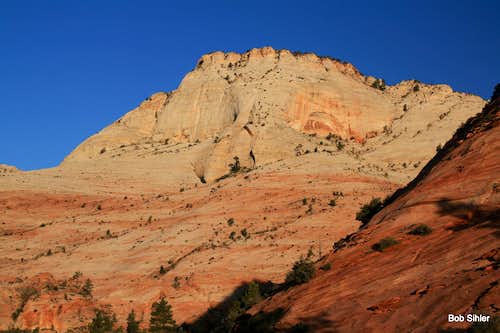 As I learned in this discussion, Ant Hill is an unofficial name from the legendary Black Book the rangers at Zion keep.  The Black Book is a source of climbing and canyoneering beta, plus unoffical names for all sorts of peaks that are mere elevation points on official maps.  Apparently, no one really knows how it got that name, or if someone does, he isn't saying. Sensibly, the person who told me the name of this peak likes to think it has something to do with the biting ants he encountered while climbing the peak.  Fortunately, I met no such ants when I climbed it.

Ant Hill is clearly visible from the road and probably photographed by thousands of people yearly, but it is virtually unknown as an entity, being among the obscure peaks on the east side of the park.  Because only one peak east of the Zion-Mt. Carmel tunnel and not considered part of the Zion Canyon group-- Checkerboard Mesa-- has a name on USGS maps, and because there are only two officially maintained trails originating out there-- Tunnel Overlook and East Rim-- the east side is Zion's flyover country, so to speak; the majority of visitors are people on their way to or from Zion Canyon, and they do little more but stop and wander a few yards from the roadside to take some pictures.  Thus, the east side, with its many unnamed peaks and its numerous washes and canyons, is a haven for scramblers and explorers who delight in isolation and secret wonders.  In addition to all the peaks, there are several small slot canyons of varying difficulty levels, including Keyhole Canyon, a dark, very narrow technical slot.
Perhaps this sounds a little goofy, but Ant Hill is no mere hill.  Climbing it involves steep, exposed sections and loose, crumbly sandstone.  Parts of the mountain seem to be doing their best to return to the sand from which they came.  To climb the peak, you are looking at Class 4 or 5.2, and both ways have several sections of scrambling.  This is not one of those peaks that is essentially a walk-up except for one short difficult spot.
From many angles, Ant Hill looks impossible to climb without roping up and clinging for dear life to the rock.  In fact, as I viewed it from the route to Jenny Peak, I began to question whether I really wanted to go over there and climb it next (Jenny Peak and Ant Hill were objectives for a planned two-peak morning), especially as I recalled the comments I had read about the climb in this trip report, written by someone I've climbed with and whose skills and observations I respect.  It was because of that TR that when I set out to climb Ant Hill by myself, I chose to wear rock shoes and carry a rope for rappelling, though it turned out I never needed the rope.
Probably because Ant Hill is unnamed and its two known routes are "only" Class 4 and 5.2, challenging scrambles but nothing to scream about if you're into technical routes, no one probably cares too much who first climbed this peak, or when, and no one seems to know, either.  But what I can say is that it doesn't get climbed too often.  For starters, you find very little when you google for information about this peak.  There were no cairns along the route I used, which is the easier of the two, and the summit showed no obvious signs of human presence (though plenty of signs of bighorn sheep, a herd of which I encountered on the slopes during the approach).  I saw no summit cairn or register, though I should note that the summit is brushy and virtually flat, so the actual highpoint is not so simple to identify and it's possible I just missed a cairn and/or register.
Since I have mentioned the brushy summit, let me hasten to add that you should not let that deter you from climbing the peak.  First of all, the routes are enjoyable and challenging and afford great views.  Second, there are still great views from the rims of the small summit plateau.  And the upshot of the brushiness and the trees is that you can find some shade to relax in before heading back down. 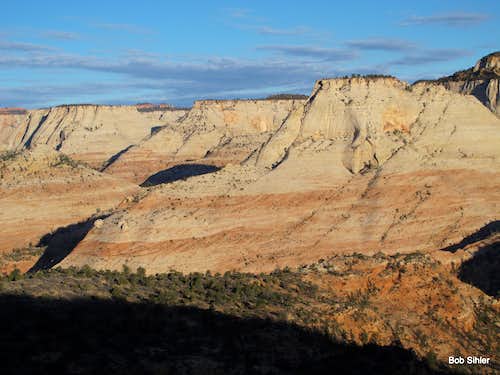 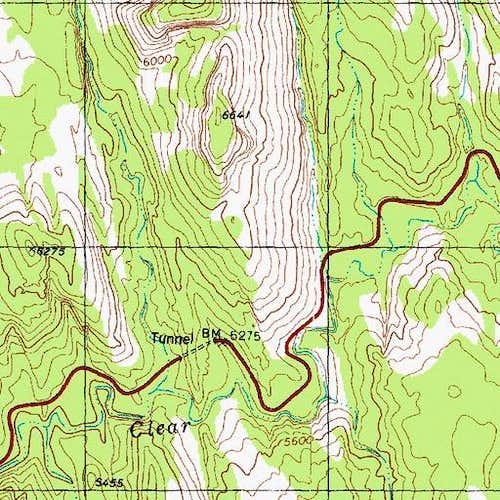 Unofficially named Ant Hill is Point 6641. In this map you can see the entire approach and route for both the north ridge and south buttress.

From Zion Canyon, drive east through the Zion-Mt. Carmel Tunnel, which many people apparently see as a highlight of a Zion trip but which I have always found tedious since so many drivers feel compelled to go very slowly and to honk their horns in the tunnel as well.  Tip: go through before 8 A.M. to avoid most traffic and to avoid being subject to traffic control in order to let RV's and other oversized vehicles through.
Continue east to a second tunnel.  If you are going to climb the north ridge, park at a pullout just west of the tunnel.
Otherwise, go through the tunnel and drive about half a mile to a large pullout where there is a view of a slickrock waterfall in one direction and Ant Hill's southern aspect in another.  Park.
Note: if you want to go up one way and down another, be aware that foot travel is prohibited in the tunnel, so you will have to find a way over or around the tunnel unless you have left bicycles, which are permitted in the second tunnel.
Of course, you can approach from the East Entrance as well, but I have never recorded the pertinent distances from that direction.

There are two known routes.  Neither is for beginners or for people with exposure issues, and you should be used to working with treacherous rock without any protection.  This is a dangerous peak!

1.75-2 miles one-way, app. 1400' elevation gain, Class 5.2
I have not yet used this route, so the details are based on others' accounts.  Although I had initially intended to descend this way, I had decided to go in rock shoes only and found myself not relishing the hike back through the canyon in them.
Hike up the canyon on the west side of Ant Hill for about 0.75 mi and then work your way to the saddle just north of Ant Hill's north ridge.
The climb up is reported to be narrow, exposed, and loose, with poor opportunities for protection, though there are reputedly some sketchy bush anchors available if one wants to rappel the crux on the return.  The crux comes fairly early and is a 10' 5.2 crack.
This route is supposedly looser, narrower, and more exposed than the other.

Only about 1 mile one-way, app. 1400' elevation gain, Class 4
Work your way up slickrock slopes to the "peak" just south of Ant Hill; it is part of the peak's southern aspect.  There is no one best way, but you can keep it at Class 3-4 without too much effort.  It is surprisingly easy to wind up on steep Class 5 terrain here. 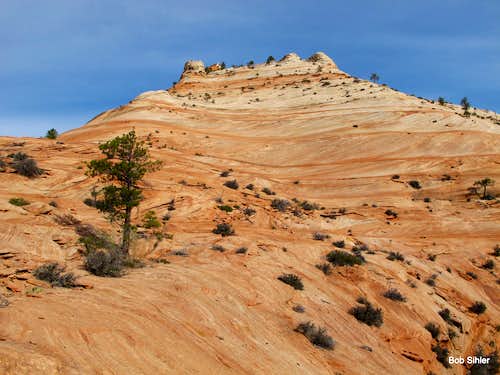 Seen from the parking area. Head up this formation.
Descend to a saddle from which a watercourse (likely dry or just a trickle) flows west.  Where this watercourse begins to drop steeply, work across slabs and ramps to talus slopes that provide a Class 2-3 way higher up the peak.  Soon you are on the west side of the peak; the south buttress is on your right and there seems to be no easy way to gain it. 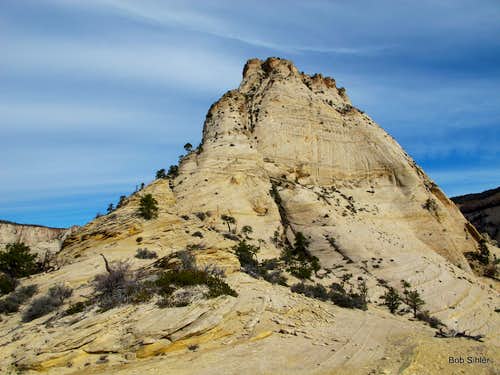 Seen after topping out on the approach via the south aspect
It's hard to explain exactly what to do here, so I won't try.  Basically, find a way up onto the south buttress.  The easiest way I found was near a large tree (good landmark to use on the return).  I continued north for a bit and then made an ascending, somewhat exposed traverse back south on ledges until I found safer ground taking me to the crest of the buttress.
Next comes perhaps the sketchiest part of the route.  You have to climb steep, exposed slickrock slabs.  Don't blindly trust any hold.
Eventually, you will find yourself near the summit and being channeled by the path of least resistance into a steep, dirty chute.  You're going to work your way up and eventually cross that chute (pretty exposed in places).  Scramble to the right (exposed) and then finish the last 30-50' up loose and exposed Class 4 terrain. 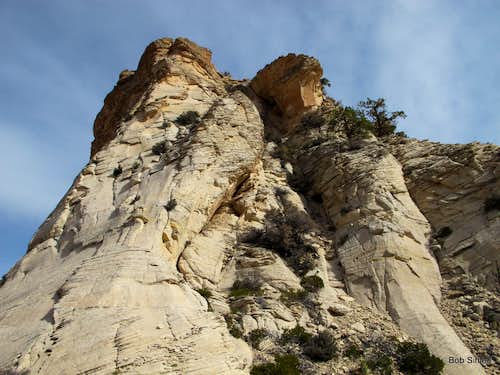 Get into the chute and work up it past the cave-like feature. Below the block on the right, start heading up and right on loose, exposed terrain for the Class 4 finish to the summit.

Best fall and spring. Winter carries the potential of snow and ice on the steep, exposed sections. If you climb it in the summer, start out very early. The heat will turn the surrounding slickrock into an oven by late morning.