The normal route to Antelao is not a via ferrata as at so many Dolomites peaks. It is a demanding and interesting climb that requires climbing easy (UIAA I-II) but exposed rocks without fixed cables. The most characteristic item of this trip is what makes out the shape of Antelao – it is the huge inclined ramp of the "Laste". This area should be dry and free of snow - otherwise, the trip would be too dangerous.

Climbing Antelao is possible as a daytrip but I recommend sleeping at Galassi hut. 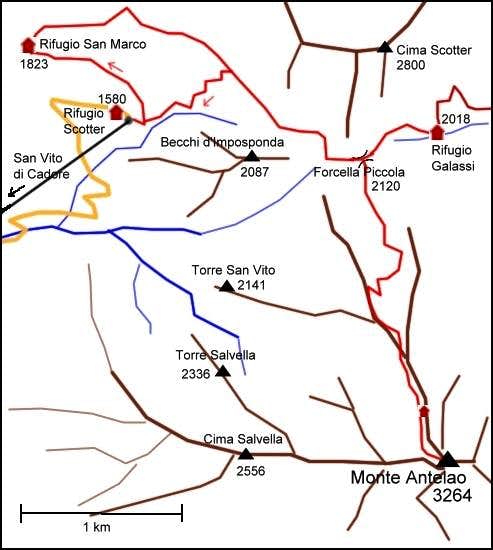 You can get there:

a) by a chairlift that starts at app. 1260m where there is a big public parking. The lift will not start early in the morning and except August it will only run on weekends
b) instead of taking the chairlift - on foot or using a mountain bike
c) using your private car if you are not afraid of the rough road. This is only possible before 7 a.m. and after 6,30 p.m.
d) using a taxi service from San Vito

From Rifugio Scotter you follow first the scree road then a nice mountain path through forest to the cozy hut Rifugio San Marco. Lodging here is also possible but then the next day is one hour longer.

So we continue on a long and even traverse with good views to Monte Antelao and with steep zig-zags at the end to Forcella Piccola pass (2120m). A direct ascent to there is possible from Rifugio Scotter, but exhausting due to much loose scree.

A short descent from the pass to the east leads to Rifugio Galassi hut (2018m).

A short ascent on yesterday's route leads back to Forcella Piccola pass. It's advisable to depose the overnight luggage somewhere at a hidden place. The route - marked with red spots - leads up to the high valley east of Antelao north ridge, which is filled with scree. Rockclimbing starts at app. 2400m. The ascent route through this area does mainly a traverse to the right, using ledges and short steps to the next ledge.

At app. 2700m you reach the broad ridge called "La Bala". Higher this becomes for some meters a narrow and exposed ridge and then forms the huge ramp of the "Laste" that falls down several hundred meters on both sides. The ramp is followed in uniform steepness, in the upper part channels are cutted into the slabs. Between the lower and the upper part of these slabs a gap has to be crossed and the higher part is reached by a chimney (UIAA II).

On the upper 200m the route runs near the ridge and passes the spot where there used to be the emergency shelter of Bivacco Cosi (3111m) by a chimney. The typical tower on top of the "Laste" has to be climbed on the west side. At the most exposed part a cable helps climbing another chimney (UIAA II). After the next ledges, the final meters to the summit run on the east side of the ridge. 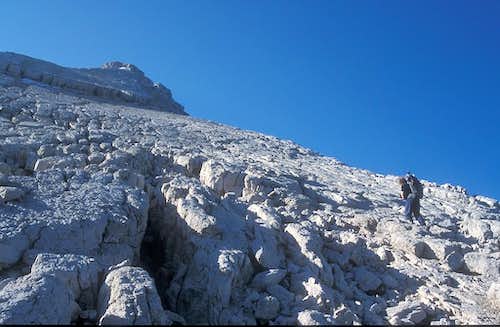 On the same route. Be careful – the descent is the more dangerous part! Once you have left the lowest rocks you can shorten the route to Forcella Piccola with a downhill slide through the scree.

normal mountaineering gear with hard boots; walking poles. Crampons and ice axe can be necessary if there is snow on the route. But as mentioned then a normal climber should not go there.

description in German on www.thehighrisepages.de