In Memory of Rahel Maria Liu

This page is dedicated to the former maintainer Rahel Maria Liu who tragically died during an attempted climb of the Innominata spur on the southern (Italian) face of Mont Blanc in August 2004.

The Cosmiques Ridge is a supurb varied route which is justifiably popular. It is the perfect introduction to Alpine mixed climbing has enough variety to keep experienced climbers happy. The route is also known as the Cosmiques Arête and South-South-West Ridge. It's graded at AD (sometimes even PD or PD+) but the crux is hard for its grade and suitable mixed climbing and abseiling skills are required. Much of the ridge can be climbed moving together, however the crux section will likely require a belay to be established. The rock is excellent quality throughout and there are plenty of locations to place protection.
It is possible to climb the ridge year round however poor snow conditions will make the route more difficult and dangerous. In poor conditions, descending from the cable station down to the Col du Midi can also be a nervous affair. Most people climb the route between June and September. The ridge was first climbed by George and Maxwell Finched on 2nd August 1911. 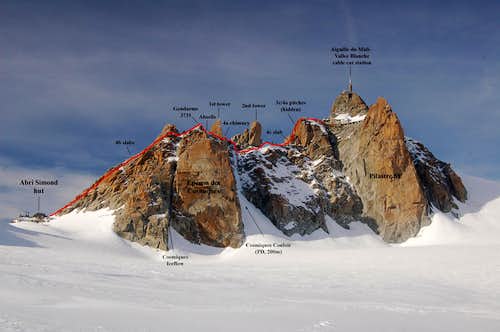 The route starts from the Abri Simond bivouac hut which is adjacent to the Cosmiques hut. The obvious way to reach the starting point is via the Aiguille du Midi-Vallee Blanche Cable car from Chamonix. From the cable car station, descend to the Col du Midi and then head for the Cosmiques Hut, bearing towards to Abri Simond as it comes into view. It's possible to climb the Cosmiques Ridge the same morning as having taken the cable car however there will be climbing traffic on the route which will likely slow you down.

The route description sounds intricate however it is generally easy to navigate. Cosmiques Ridge commences from the Abri Simond hut from where it climbs 150m to 3770m. Despite the short distance, the route usually takes about half a day. Initially the climbing is up an easy snow slope and then mixed ground. As you approach the first gendarme of the subsidiary summit (3731m), climb the inclined slabs (4b).

Follow the crest of the ridge to the second subsidiary summit. Make a descending traverse (exposed, possible abseil) across two steps. Follow the steps to the end where it passes between two rock walls.
Abseil 30m in two pitches via the bolted belays.

Continue traversing along terraces to go round the first big tower. Climb an awkward chimney (4a) to reach a good ledge on the right. Climb back onto the ridge via a snow slope that overlooks the Cosmiques Couloir. Go right round a second tower. Alternatively skirt the second tower to the left, going through a small notch and descending a small ice couloir. Follow the ridge to the foot of the crux slab.

The crux slab is only 5m and has an in-situ sling and pegs in the diagonal crack running up it but is rated 4c. The slab appears to have been made easier recently by a mindless moron having chipped sections out of the rock. I have not seen the evidence first hand to be able to gauge how this affects the difficulty but these photos clearly show the damage:

If you can't manage the slab then you will need to back-track and descend the Cosmiques Couloir (PD, 200m, 40/45 degrees) down to the Col du Midi. 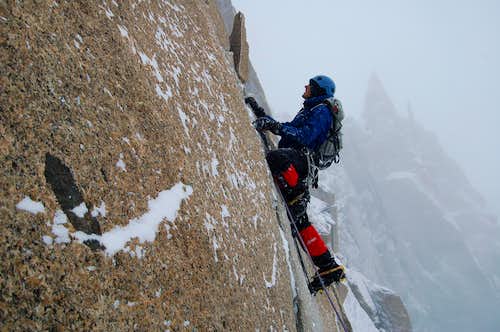 Above the slab, traverse right along the narrow ledge. Climb a few metres to a terrace on the left and move onto the NW face. Gain a couloir-chimney, then climb clacks (2 pitches 3c/4a). Go up onto the final snowy shoulder and climb the metal ladder to the terrace on the South pinnacle.

Abri Simond bivouac hut
Officially the hut is no longer usable but is still open in winter when the Cosmiques hut is closed. There is no charge for staying and there are 18 beds. There is no electricity and you need to be completely self sufficient to stay here.

The Midi Station
An rougher option is to sleep on the floor in the midi station. Again you obviously need to be completely self sufficient. On the plus side, the route will finish right on your doorstep.

Camping
People always camp on the Col du Midi. It's not officially allowed but people do it anyway!

I plan to add a proper list of external links in the coming days...

I climbed Arete des Cosmiques on 20th of August 2002. Please note down the following :
1.After the gendarm (3.731m) you continue for a little while the ridge and then you abseil down twice. There are two abseil rings, slings etc.Each abseil is about 10 - 15 m.
2.The key passage was well equipped. There were rope ladders & sling. After the key passage you reach a bolt (there is another one above but is unscrewed), then continue 3 -4 meters right, approximately 10 meters up (the first 3/4 is an easy narrow passage)and then left.

The passage of 4+ has a large ring bolt about 2m up it to aid the hardest move, this means the route can be done at 3+ (UIAA)

The cosmic arête is mostly graded (by most of the guide books), as PD/PD+ .
The grade IV rock section is very short one just a couple of moves.
The route shouldn’t be underestimated but then its not difficult, relatively safe, and nice and short route for acclimatization and introduction to the area.

Here's a terrific seven minutes of explanation and view of climbing the Cosmique in the winter. Best thing of doing it in winter is you have the entire spectacular climb to yourself! https://www.youtube.com/watch?v=48yBWBRkzqM If you like this video leave a thumbs up, and subscribe for a new adventure in your in box each week!

I climbed Arete des Cosmiques on August 10, 2020 with a climbing partner. We spent the night at the Cosmiques Hut to make sure we could start early enough since we felt that route finding was going to be biggest challenge. A quick note on the abseil(s): We brought a 40m rope, which was long enough to do the abseils on the North Face (Equipped with rings, slings, etc...) rather than the South Face (suggested by the guidebook but no longer recommended). If you want to see more about how it went, here is the full video of our climb: https://youtu.be/ZZYTyLEQRxM