Update, Oct. 1, 2017. Archer Mountain suffered a wildfire in early Sept. caused by embers being blown across the Columbia River from the Eagle Creek fire. The area was closed for a time but is now open except for the DNR closure areas to protect allegedly endangered species. The fire burned the southeast flank and the south side but did not extend into High Valley or into the trail system atop the Mountain. Trail system has been damaged by fire fighting efforts and new cat tracks are extensive on the far south side of the peak. Most trails are badly overgrown and some sections extremely hard to follow. In the process of fire fighting, some rudimentary new trails have been cut through the brush. Be careful! Archer Mountain is one of those peaks that millions see but very few apparently climb.

The peak’s commanding twin ramparts are supremely visible from I-84 as the road winds it's way up the Gorge past Multnomah Falls but ask just about anyone "what's the name of that mountain" and you will get an "I don't-know" or a blank stare! Well, the time has come to identify this enigmatic outcrop of Miocene basalt! Archer Mountain and the adjacent valley to the west is also the home to some amazingly beautiful waterfalls. All these falls are either completely hidden from view or visible only from rare vantage points.

Surprisingly, there are no trails to a single one of them save the little 30 footer in a narrow cleft north of the powerlines on the north side of the mountain. None of the popular trail maps or even the USGS maps of the area show a single one of the many “user maintained” trails on and around the peak and likely as a result of this, few seem to venture onto the mountain. The one dashed line on the main part of the peak that the USGS map shows is actually an old logging road until recently used as an ATV trail. Recent evidence indicates that ATVs no longer use this route. Nevertheless, there are access points on all sides of Archer that allow hikers and climbers into the area. (See map, below – double click to enlarge.)

>>Read this before you attempt this peak! - A note on the trails: None of the many trails on and around Archer Mountain are "official" or maintained by anyone other than the few local trail hikers. As such, conditions vary from "easy to follow" all the way down to "nonexistent" in places and at times. Also, in some areas footing is difficult and exposure is extreme so please use this area with caution! This is an area of steep hanging meadows, steep and loose talus, dense vegetation and towering cliffs so you don't want to get lost and try to bushwhack out. Your best bet would be to seek out and go with someone who knows the area!

For further details on these two access points, see the "Routes" section on the left.

South access via Smith-Cripe Road: Turn north on Smith-Cripe road at MP 29.5 on State Route 14. >>>Proceed 1.5 miles to the end of the pavement and park in the paved turn-around area. (A gated one-lane gravel road continues for 6/10 mile past the gate but vehicular traffic is not allowed past this point.)

North Access via Franz Road/Duncan Creek Road: Turn north off of state Route 14 onto Franz Road at MP 31.7. >>>Proceed 1.0 mile to Duncan Creek Road and turn left (uphill). In 1.9 miles and just before the power lines, turn left onto the power line access road and park. (This gated one-lane gravel road continues but the foliage will scratch your car up and besides, you are here for a hike, anyway!) >>>Hike up the gravel road for 1.4 miles where it branches to the south and crosses the power lines and heads into the woods past a deep "tank trap" designed to keep the ATV’s out (hasn’t worked!) You may want to take in a view of a nice waterfall in a deep cleft in the rocks where this road forks to the left in 1.1 miles. (See map.) You have a choice of either taking the old logging road or the trail to the summit and the viewpoint. Either way, your chance of meeting anybody else is virtually nil and the scenery is great – so enjoy!

Most of the land is either Department of National Resources or Gifford Pinchot National Forest so is public. See next paragraph:

Restricted areas: The Dept. of Natural Resources (DNR) has placed the uppermost reaches of the valley and other areas of the peak off-limits to visitors due to the sensitive nature of some of the flora and fauna in the area. Please respect this and enjoy the views of the area from other vantage points. Please see the map in the photo section.

There are many idyllic spots to camp in High Valley and people camp there occasionally but there are no facilities whatsoever. Archer creek flows only intermittedly in the late summer so expect a short hike to get water or bring your own.

High Valley Farm: In 1972 a group of about two dozen people purchased 183 acres in the valley immediately west of Archer Mountain and formed a commune. They moved into the old buidings dating back to the original farmers and some built new, but rough-hewn homes for themselves. To make a long story short, they had a hard time economically and eventually they ended up agreeing to disagree, the group slowly drifted away and the state purchased the land. In the words of a current local resident when asked "what happened up there" she replied "Well, you know, people change." The five or six houses are gone with only a few traces of foundations remaining. Steve Duin of the Oregonian published a detailed article some years ago telling the whole story and I'll attempt to find it and give more info. High Valley was originally settled about 1900 and many of the walnut trees, pear trees and the four varieties of apple trees date to the time of the original settlers. When the pasture areas were cleared of rocks, many were piled in a long fence row on the north end of the valley and this four foot high, four foot wide and hundred yard long wall is still there to be seen today. (see map.) 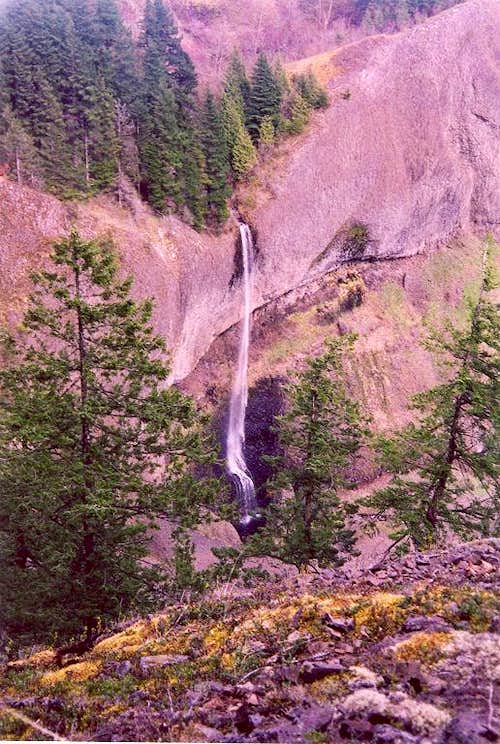 Archer Mountain is home to one of the Gorge’s most enigmatic features, Archer Falls (AKA Columbia Falls). This 214 foot wonder cascades off an overhanging basalt ledge and plummets to Archer’s hidden valley. Glimpses of the falls can be had from some of the trails around Multnomah Falls on the other side of the Columbia River but the falls can’t be spotted from any common vantage point on the Washington side. The deep upper canyon also sports dozens of smaller ephemeral falls during the winter and easily rivals the best waterfall lined canyons on the Oregon side of the Columbia for scenic beauty.

For you true diehard waterfall lovers: A series of four falls, the most enigmatic of all, reside in the Cable Creek valley one ridge to the west of Archer Mountain. Indicated on the map, these falls can only be accessed via difficult bushwhack treks through the wild and woolly ridges and canyons. (Again, routes indicated on the attached map.) None of these four falls are shown on the USGS maps of the area and none of them can be seen from published aerial photos of the area so they are hidden indeed!

The northeastern access via Duncan Creek Road is off-limits!