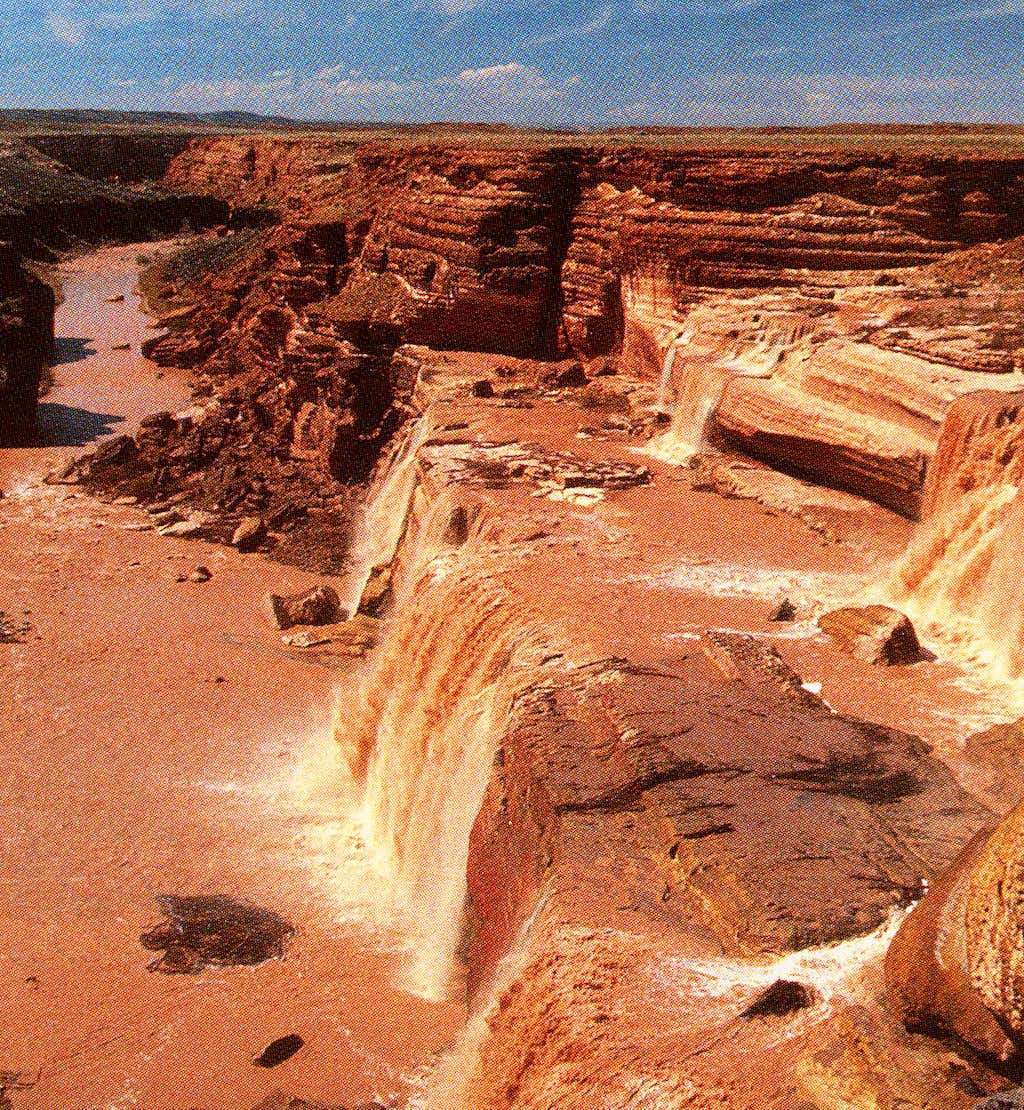 "Grand Falls,"the locals call it Chocolate Falls, is located on the Little Colorado River at the far eastern edge of the San Francisco Volcanic Field. Although the Little Colorado River is a major tributary of the famed Colorado River, the river's channel is bone dry most of the year. To see the falls in ACTION, plan your visit for spring runoff in March and April. The creation of "Arizona's largest waterfall" is directly linked to volcanic activity nearby. About 150,000 years ago, basalt lava from Merriam Crater flowed as a river of magma for about 7 miles, to where it spilled into the 200-foot-deep canyon of the Little Colorado River. The hot, glowing river of magma lapped up and over the canyon's opposite rim and flowed downstream, following the river channel for 15 miles before running out of steam. This great mass of lava effectively dammed the river. The river was forced to change course, making a wide horseshoe bend to the east and around the margin of the "hardening" lava. Over time, the river carved a new channel and in the process "excavated" portions of the lava that filled its old channel. To reach its old channel, the river flows in a spectacular fashion over sandstone steps in the Kaibab Formation that once was part of the north wall of the former Little Colorado River canyon. When the river is "flooded" with spring runoff or flash floods from summer storms, this spectacular cascade COMES ALIVE as "Grand Falls." Because the river's water is usually muddy, natives living in the area refer to it as CHOCOLATE FALLS. Actually, the colour of the muddy water is MORE the colour of a latte found at a coffee shop such as Starbucks. The water continues north in the direction of its eventual confluence with the mighty Colorado River near Cape Solitude and Grand Canyon National Park. Photo courtesy of Ralph Lee Hopkins, 1991 In September 1851, Captain Lorenzo Sitgreaves' expedition left to find a wagon route between Zuni, New Mexico and San Diego, California. They were fifty-three strong, with more than 100 mules and a flock of sheep. They descended the Rio de Zuni to the Little Colorado, beyond the future sites of Holbrook and Winslow, Arizona. The group continued northward to GRAND FALLS, where they left the river to strike west around the San Francisco Peaks. They were without water for four days. On October 12th, they discovered Leroux Spring. The remainder of their journey was an ordeal of starvation and Indian attacks before they reached Yuma Crossing. They arrived in San Diego on December 18, 1851. (Courtesy of the Museum of Northern Arizona) ~ Because the falls are located in an isolated part of Coconino County, please consult a topo before your visit. Spring 2008 should be an AWESOME time to visit this remarkable falls. Please note there IS a picnic area nearby, so bring a sandwich and ENJOY!!! ~
« PREV NEXT »

awesome, especially when it has large quantities of water. Kind of like a smaller version of Niagra Falls! Cheers!