Armando da Roit was the guardian of the Vazzoler refuge (Civetta) and when his friend Bruno Detassis was the soul of Brenta, he was the soul of Civetta, a friend for all climbers coming to his refuge. 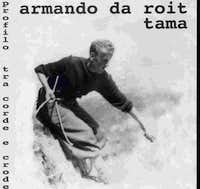 Armando takes his 6 years daughter to the top of Torre Venezia and she loved it! 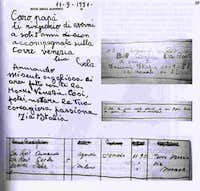 Carla 5 years old comments on her climb with her father also to the Torre venezia. 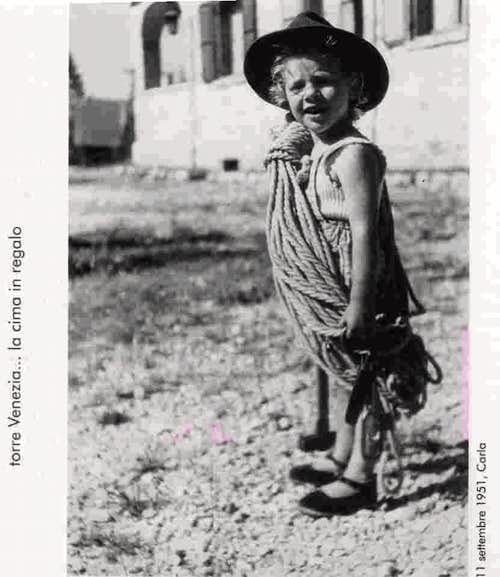 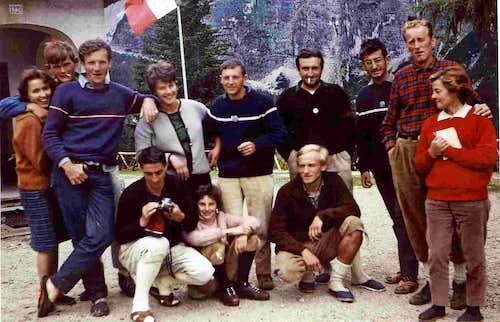 Armando black tocans were as hard as wood and so strong that one puff made me sick! Armando was a great gentleman, the knight of Vazzoler and Civetta. In 1963 at Vazzoler, during the "camp de haute difficulté" which Lucien Devies asked Le Grec to organise and manage, I climbed with the youngest among us, Henri Paul Plathey who just graduated from Polytechnique. We did several routes together, one with Armando, le Grec and Sonia, 4th ascent of his route on the Bussaza. As I was not fit enough (a student in the UK, the poor welsh weather had not allowed me to train much) and as I did not feel climbing the Su Alto with him, Paul who wanted absolutely to do a 6 superiore convinced Bonafede to go with him. The worst storm that Armando had ever seen at his Vazzoler refuge burst when they just got over the Su Alto big overhang. Only 180m and they were out. But during 36 hours it snowed continuously. In the middle of August, we had 1m of snow at Vazzoler. Beppi (Beppi de Franchesch), le Grec and Armando were confident with Marcello Bonafede capability to resist the worse conditions. After 2 days of this storm, the sky was clear blue. Up early, I saw Marcello coming back alone, with hollow cheeks, a gaunt and heartbroken look. The snow falls had stopped them a pitch above the roof. Snow was all over and it was desperatly cold. Going down was the only way to save their lives. Above the overhang, Plathey abseiled first, but had great difficulties in making the pendulum to reach the belay and a peg. He collapsed. Heart attack, he died. Imagine Bonafede's situation, in this horrendous storm, hearing nothing from his mate whose rope remains blocked. After several hours, using prusick knots, he comes down on the rope, reaches Plathey's body, makes the pendulum under the overhang and fix him on a peg, manages to get the rope down and makes his 2nd bivouac. The 3rd day early in the morning I saw him coming in Vazzoler.

For Beppi and Armando, no way they were to behave as in Cortina: come down abseiling till the body, cut his rope and throw him down the wall. With Le Grec and Armando, they organised the rescue to get the body down in the best possible state, caring for Plathey's parents. Beppi did ask to around ten of his alpinists friends (all alpine troops) from canazei (Marmolada) to join us and so came Bonafede's best friend, Natalino Ménégus, 2 days after. Le Grec, Armando equipped the 400m of the first part of the climb with zip lines with the help of the 10 Beppi' volonteers. Meanwhile, Bonafede who insisted to go first was ropped with Beppi and went to the overhang with a 400m rope while Menegus and myself, at the foot of the corner and we were passing it while they progressed (the body was 190m above us: the loop once the body would be with us had 380m in length).

At the end of the afternoon, everything was ready to get down Plathey's body. We had to get at least 30m of slack before we could feel him on the rope but after having lowered him 100m, one of his boots stuck in the middle of the wall on some minute climper!

We went down to Tissi for the night and back up next morning. This time, it's more than 40m of slack that we had to get in before unblocking his body, the 4 of us working on it. Everything eles went without a hintch. Le Grec and Beppi's friends zip lines were a professional job. Then we carried Plathey's body on a stretcher from the Tissi refuge to Vazzoler, before going down to Agordo where his elder brother was waiting for us. At one time, we came to a priest with his flock and the man starts shooting pictures at us. In fury, Armando, without taking off his usual toscan cigar, tears off his camera from his hands and smash it to pieces against a rock. The raging look of this tall beanpole prevented luckily any rebbeling reaction from this poor priest. What a man! It is of no astonishment to those who knew him that his compatriots made him a senator for the region a few years latter.

Henri Paul Plathey's parents could see him a last time in a presentable state. It was not much, but at least we did it. In those times, this attitude was so much in contrast with the sickening behaviour of the men in charge of mountain rescue in Chamonix that I was very proud to be part of such a generous group of alpinists who without any hesitation had given a full week of their time to bring back a dead body and without asking a penny in compensation. I so started to imitate Armando in smoking Toscan cigars, but the green ones, there are not as strong, and I bought in Belluno a red pull-over with a black V, as the one worn by Le Grec and the famous "scoiatoli" d'Ampezzo (but my "Master" had a "Grecque" on his sleeve embroided by "Jeannot", Marcus's wife and that was impossible to find). 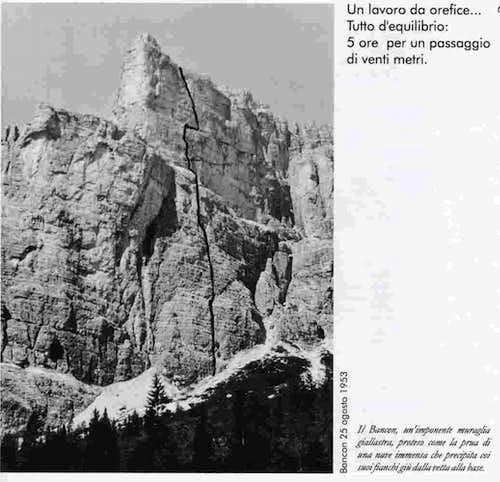 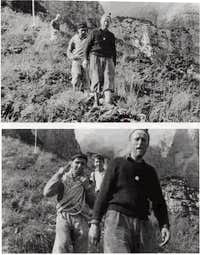 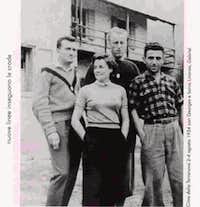 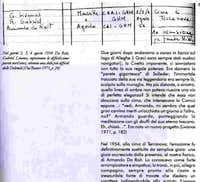 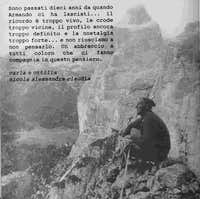 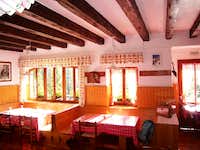 Main room Vazzoler refuge: Armando portrait on the left and Georges Livanos, alias "il Greco" on the right. The two pals together for ever.


For such men as Armando and Le Grec, climbing was not just a question of 1rst ascents but of friendship and loyalty.

I remember Armando ... one raining morning I was climbing on the wall of Vazzoler with a cigarette in my mouth, he came out of the door and hailed me "ciao Livanos"

quite a compliment from Armando. You must have climbing better than Claudio barbier who once fell off the refuge wall!

the only feature I had in common with Livanos was climbing while smoking or, better, smoking while climbing
Barbier was a great rock climber, I've made and appreciated some ot his routes, little more difficult and fine than Vazzoler wall :)

I was on friendly terms with Claudio whom I met in Chamonix and on the Freyr rocks, his "game" place. His ex girl friend (Anna Lauwaert) with some friends did build a very nice and thorough Web site about Claudio. Have a look: www.claudiobarbier.be/