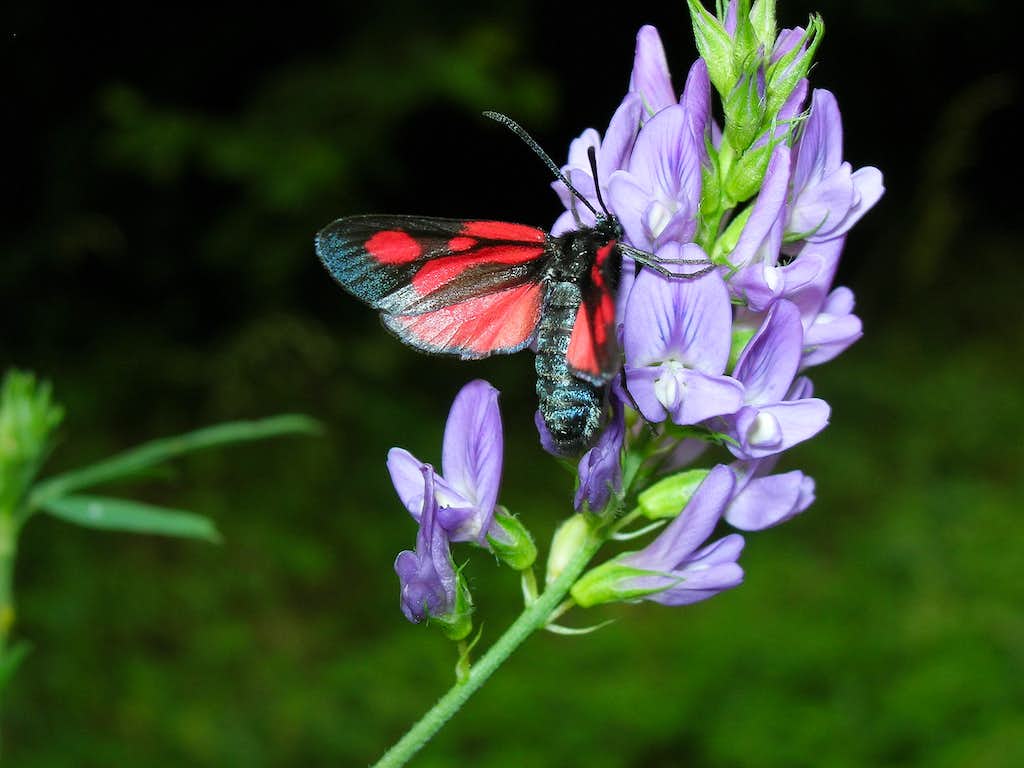 The Cinnabar moth (Tyria jacobaeae) is a brightly coloured arctiid moth, found in Europe and western and central Asia. It has been introduced into New Zealand, Australia and North America to control poisonous ragwort, which its larvae feed on. The moth is named after the red mineral cinnabar because of the red patches on its predominantly black wings. Cinnabar moths have a wingspan of 32-42 mm (1.3-1.7 in). Cinnabar moths are day-flying insects. Like many other brightly coloured moths, it is poisonous. ( info Wikipedia)
« PREV NEXT »

Thanks. Just sit down and things happen. It was the first year I had a camara with a macro function on it. It's a new demension for me.

Gotta agree with both Sequoia and Alpinist in their comments. Terrific shot.

You have some incredible floral and macro pictures. Thanks for sharing them.

Thank you. More this summer.;)

I think. Imported to eat tansy ragwort--the caterpillars do anyway.

Yes it is a Cinnabar, I checked wikipedia, thanks. But it's in Europe not imported.

If you can remember the shape of the leaves, that'll seal the deal. Lupines have distinctive leaves - see the photos here:

Or see the Summitpost album devoted to lupine.

If the shape of the flowers reminds you a little bit of furze, it's because they're relatives (both legumes aka pea family)

I can't see if it is. I can't remember the leaves neither. So I make it a Lupine. PS nice site that is. Thanks again

Without doing some investigation, I can't say for certain what it is, but I'm pretty sure its not a lupine. It is a great photo nontheless.

I wasn't sure either. I'm gonna put some energie in finding out what it is then.
Thanks for noticing.

I love a good macro, fun and challenging.

I love it also a lot. And indeed challenging, those little freinds move al the time.

Beautiful photo! The plant is not Salvia pratensis. It's an astragalus or oxytropis species.

Thanks for your correction, I change the title.