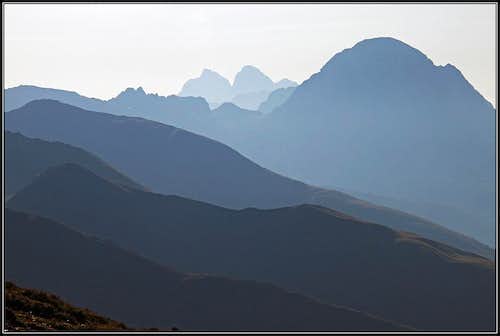 Morning view from the summit towards the east

As it is well described on the area page, the geology of Carnic Alps main ridge is very complex. In the western part the range is mostly built of older rocks, but in it there are many islands of limestone mountains which are also the highest ones. The ridge between Porze / Cima Palombino on the west and Torkarspitz / Monte Pietra Bianca is all made of older rocks. Despite high altitudes, the summits are grassy to their tops, where the slopes are steep you will find dark, eruptive rocks, so also the Italian name of our mountain us understandable. The German name Baerenbadegg is sometimes written also Baerenbadeck.

Baerenbadegg / Croda Negra is a typical ridge mountain, rising between Tilliacher Joch / Forcella Dignas, 2094 m, on the west and Kesselscharte / Forcella Cadin, 2293 m, on the east. The elevation gain is poor and also the mountain itself is nothing special, but as we shall see it is still very frequented. Towards the north, steep slopes are falling down to the end of Obertilliacher Tal, while towards the south an undistinguished ridge goes down in Val Dignas di Londo, a side valley of Val Visdende. On this ridge, on the altitude of 1935 m there's an alpine pasture with Casera Campobon. An attractive narrow mountain road is connecting this pasture with the neighbouring ones, and by that horizontal road also the Italian hiking route Traversata Carnica goes. The Austrian long-distance hiking route Karnischer Hoehenweg avoids our summit far on the northern side, over the nearby summit of Spitzkoefele. But along the whole main ridge in this part the marked path No. 172 goes. Because of its attractiveness and first of all panorama (we mostly go by the high ridge) it is today considered as the official part of the long-distance route, traversing the whole Carnic Alps (140 km).So, what people normally do - they sleep in the nearby Porze Huette, 1942 m, and in the morning start hiking towards the east. Then Baerenbadegg / Croda Negra is their first high summit. If they do the journey in the opposite direction, from Hochweißstein Haus, it is the last summit. And in nice days there are many hikers on these ridges. Another long-distance route going by this ridge (the same path as No. 172) is Via Alpina, which crosses the whole European Alps.

No need to stress that along the whole Carnic main ridge the views on all sides are exceptionnal. Along the ridge itself there are either kulisses of mountains following one after another, either diverse mountains, like the nearby limestone Porze / Cima Palombino. Towards the south there are the dolomitical sharp peaks of Carnic Alps, like Crode dei Longerin or Rinaldo group. Towards the north there are the nearby lower ridges of Lienz Dolomites, behind which the glaciated high peaks of Hohe Tauern are rising.

1. From Obertilliach. In the town deter south and drive by the valley till the altitude of 1690 m, where you park at Klapfsee. The road further on to Porze Huette is closed for public trafic.

2. From Val Visdende. By the valleys of Piave river and Cordevole creek drive into Val Visdende and where on 1261 m the road branches, drive left, past Locanda Alpina into Val di Londo. The road is closed on 1436 m, at Bivio Ciadon. If we approach the mountain from the east, marked paths are coming up to the main ridge through almost all valleys. So we can go from Lesach Tal through: Rollertal, Winkler Tal, Raabtal, Ebner Tal or Frohn Tal. The usual daily etappe of Carnic trek starts in Hochweißstein Haus, which is reachable through Frohn Tal. You drive from St. Lorenzen southwards till the altitude of cca 1600 m, where the road is closed for public traffic. If you're coming from the south, you can also drive in Val Visdende till the eastern end of the road on 1332 m (Da Plenta hut). From there you can ascend the main ridge and follow it towards the east. 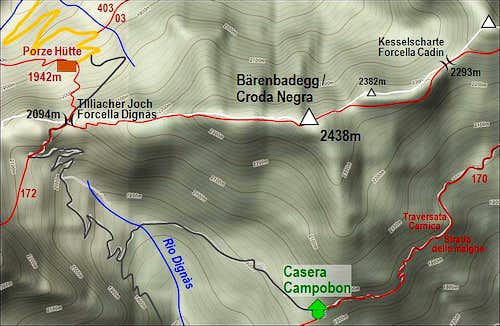 A sketch of the area

This section actually doesn't need much description - you simply follow the main ridge. From Porze Huette to Tilliacher Joch / Forcella Dignas it's only 20 minutes, from the south about 2 hours.

Once on the saddle, you go eastwards by the ridge and reach the summit comfortably in 1 hour. If you're coming from the east, it depends where you start. The usual day trip on Karnischer Hoehenweg starts in Hochweißstein Haus and you need to Porze Huette 8 hours 30 minutes. So, to Baerenbadegg / Croda Negra some more than 7 hours. If you start closer somewhere in the valley, it's less. There are too many options to list them all.

Baerenbadegg / Croda Negra can be ascended any time of the season. If in winter conditions there's hard snow or even ice on the ridge, the tour requires winter equipment. Otherwise easy tour, recomended to do it when visibility is good (nice panorama). See the main Carnic Alps page for a weather forecast.

No restrictions. In their higher parts mountain roads are closed for public traffic.