Bald Mountain is the 4th highest named summit in the Pine Nut Mountains, and perhaps the most accessible. Located just 6 miles from paved roads, it stands in stark contrast to other summits in the range, most which require miles on dirt roads to reach trailheads and/or summits. 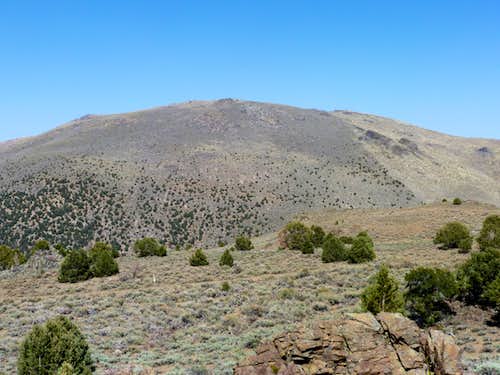 Despite its accessibility, Bald Mountain is overshadowed, given it is not a primary summit of interest in the area. This is mostly because the Sierra Nevada Mountains are accessed along this stretch of highway, and are the usual destination for hikers.

The best times to hike Bald Mountain are probably during late fall (October-November) or in Springtime (late March through late-May). Mud can be an issue during wetter months, so be advised if planning an excursion so you don’t get stuck on the dirt road.  Do not hike during summer months when heat can be unbearable.

A number of fires have occurred in the last few years that greatly altered the landscape around Bald Mountain.  Most recently, the Topaz Ranch Fire ignited on May 22, 2012 and burned several thousand acres near Bald Mountain.  The Bison fire in early July 2013 also affected areas north of Bald Mountain.

Bald Mountain is located southeast of Gardnerville in the Northwestern Nevada population center that stretches from Spanish Springs/Sparks/Reno down to Minden/Gardnernville. It is not to be confused with the Bald Mountain 9,544’ located 29 miles to the southeast in Lyon County. Although you can see Bald Mountain from Bald Mountain and vice versa.

Bald Mountain can be approach from the south or from the west. The route from the west is a longer, more boring route off of US 395. I don’t recommend this route, given parking close to US 395 probably isn’t the best idea, given the traffic it sees. Further, it is longer in terms of mileage, and you have to approach completely on private land (although there are access roads that likely avoid the risk of trespassing).

Although it takes a little longer to get to if coming from Reno, Carson City, Gardnerville, Sacramento, etc., the south route is far superior. It approaches from a canyon on federal lands, with a glorious view during the entire route.

To get to the south approach, take 395 South to the junction with 208 (Holbrook Junction). From here, the place to get to is Canyon Drive. Follow Nevada State Route 208E for about 2 miles and take a left on Topaz Ranch Drive. Follow it for 1.6 miles. Turn left on Canyon Drive, which is paved for another ¼ mile or so. It then turns to dirt and heads up into Minnehaha Canyon and enters federal lands.  The road is 4WD, although 2WD can make it, preferably use a vehicle with some higher clearance. There are a lot of rocks on the road, and some ditches and tricky areas.


There are a couple options for starting points.

After about 3 miles from pavement, the road veers to the right. Just before the turn at about 6,270' a light jeep trail heads up the slope. After about 1/3rd of a mile, head left up a gully. It rejoins a road after another 2/3rds of a mile. From here, take the road back towards Bald Mountain.  Head down the road, and you are at the base of Bald Mountain in another mile or so. You can head up the steep slope from here. The actual distance is relatively short.  One recommendation is after rejoining the road, look up west towards Peak 8130, which is only a 1/4 off the road, and is a nice side trip. Round trip distance for this route (with the Peak 8130 combo) is about 7 miles, with an elevation gain of about 3,500'.

Another option is to continue up the road another mile, and take a jeep road on the left about 3 ½ miles up from the pavement, starting at 6,680'.

The road leads up towards Bald Mountain. The problem here is that you are on the border of a private land parcel and federal land. Although nobody lives up there, there is a sign blocking access to part of the jeep road. You can scramble up on the right side a little ways and descend back to the road, and you should be clear of it, or just scramble up a hillside to the right of the road, and avoid the area completely. Then head up the slope to Bald Mountain. More details are in the Red Tape section.

Regardless of the route taken from here, head up towards a gully that climbs to the right of a big rock formation, obvious from whatever vantage point you are on once you reach higher ground. From the gully just to the right of the rock formation, Bald Mountain is approximately 1 mile away, in a steep 1,455’ or so. This is probably the most straightforward way up to Bald Mountain. 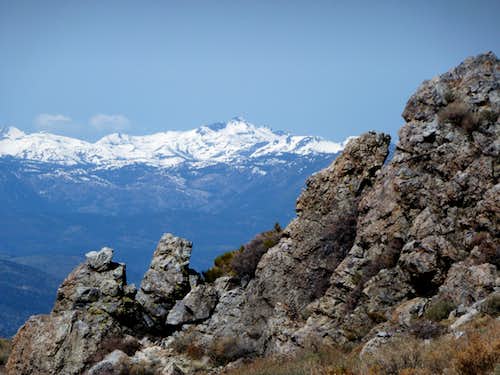 Round Top 10,381' in the CA Sierras seen from below the summit 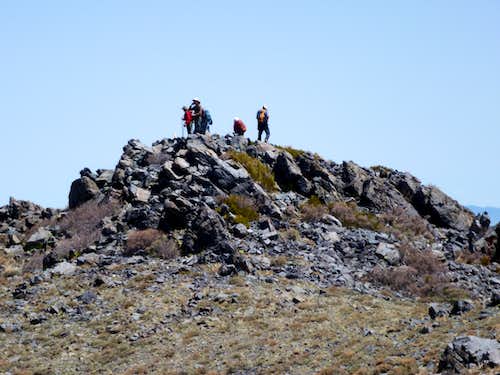 Group on the summit

Descend on the other side of big rock formation. You can even get on top of it for some nice views. The route down this side of the rock formation isn’t too difficult. There is definitely brush, but a lot of open area via animal trails.

This route is 5-6 miles depending on how you avoid the private land.

Given this is a pretty short hike in terms of mileage (though not in elevation gain), there are two ways to add mileage. About 700 yards from Bald Mountain is a lower summit bump, Point 9225. Just 3’ shorter, it has better views north towards the highest peaks in the Pine Nut Mountains Oreana Peak 9346’, and Galena Peak 9416' and Mount Siegel 9451'. 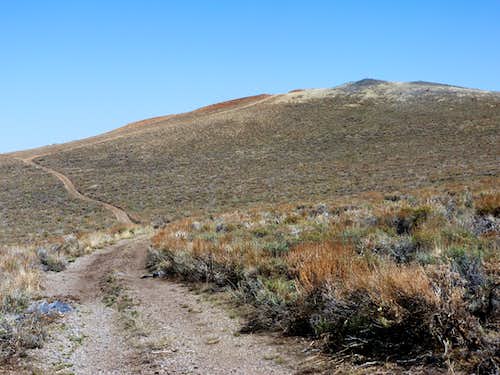 When we hiked Bald Mountain on April 28, 2012 we were surprised to find a “No Trespassing” sign shortly up the jeep road. Our understanding from maps was that this is on the border of private and federal lands. There are irrigation lines throughout the area, and the area where the “No Trespassing” sign is found, appears to be linked to that. It isn't clear how large the off-limits area is, so be respectful. It appears that the first route described (the steeper route) may avoid some of these issues. Most of the mountain is on federal lands.