Panorama of the Quartz Mountain region with Baldy Point (Quartz) to the right. Submitted by The Lower Marmot.
Photo by Luke Loeffler.

Baldy Point (also known as Quartz Mountain to climbers), is one of the best examples of granite face climbing outside of Yosemite. Quartz rises 300 ft out of the southwestern Oklahoma wheat fields and is on the far west end of a long chain of granite domes that make up the Wichita Mountains. Mt. Scott, to the east, is also part of the range. With up to 180 ft walls, the granite face climbing has been compared to the rock at Joshua Tree and is considered some of the most challenging around. Quartz has over 87 routes of mostly sport climbs, some trad lines sprinkled in, as well as several RX solo routes. Quartz is not considered a beginner area. In fact, you are expected to get your feet wet at Mt. Scott or similar areas in the Wichitas before tackling Quartz. With climbers like Duane Raleigh putting up most routes, expect the lines to be difficult, sporty, and run out. Until recently, some of Duane’s routes had only been repeated a few times (because they were done solo) and then only after they were retro bolted! Although bolted, most routes require nerve and boldness not normally needed for your average crag. Visit Quartz and you will come away with a sense of accomplishment.

Baldy Point (Quartz) has an interesting history and is worthy of mention. The climbing started there almost 40 years ago; however, it was in the mid 70s and early 80s when the most significant climbing occurred. Guys like Duane, Bill Thomas, Mark Herndon, and Terry Andrews put up bold face climbs, many times solo, or with little protection. Quartz was originally on private property owned by Margaret and Ted Johnson. These folks welcomed climbers for over 30 years until Ted’s death in 1993. Margaret had become ill and had to put Quartz up for sale to pay for her medical care. Fortunately, the Johnson’s daughter wanted to preserve Quartz for the climbers and allowed the Wichita Mountains Climbers Coalition (WMCC) and the Access Fund to purchase the property on March 30, 2001. Six days later, the WMCC and the Access Fund donated the mountain to the State of Oklahoma to be part of Quartz Mountain State Park. This page is dedicated to the WMCC, the Access Fund, and Ted and Margaret Johnson, whose efforts and generosity will preserve climbing at Quartz Mountain forever.

From "Outdoor and Trail Guide to the Wichita Mountains of Southwest Oklahoma" by Edward Charles Ellenbrook: "As of January 1, 2002 Quartz Mountain State Park, including Baldy Point, became Quartz Mountain Arts and Conference Center and Nature Park. At that time, the management of the park was transferred from Oklahoma Tourism and Recreation Department to the Oklahoma State Board of Regents of Higher Education." (Courtesy ATTM) See links page for more history on Quartz and Oklahoma climbing. 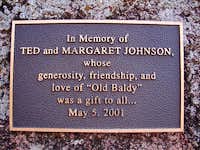 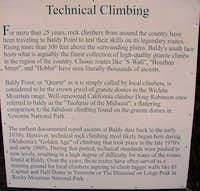 Baldy Point is located in extreme southwestern Oklahoma 17 miles north of Altus and 45 miles south of Interstate 40. From I-40, exit 66 at Clinton/State Hwy 183. Drive 45 miles south to the town of Hobart. At Hobart, turn west on state highway 9 for 10.2 miles to the town of Lone Wolf. Just before Lone Wolf, turn south on state highway 44 and drive for 9.5 miles to the entrance to Quartz Mountain State Park on the right. From Dallas/Ft. Worth, take U.S 287 northwest to Vernon, Texas. At Vernon, go north on U.S. 283 to Altus, OK. In Altus, 283 changes to state highway 44. Go 17 miles north of Altus on state hwy 44 to entrance of Quartz on the left.

At the entrance to the park, drive north for 1.4 miles on 44A until coming to a "Y" intersection. A sign will be there for "Baldy Point." Go left (west) at the "Y", following the sign, and continue on new paved road for about a mile until passing Baldy Point on the right and reaching an intersection. If you cross a new bridge, you have gone too far. Turn right (north) at the intersection and drive on a paved road for 1 mile until reaching a dirt road aligned with telephone poles on the right. A sign will be on the right for "Baldy Point." Turn right (east) on the dirt road for .4 miles. The road will Y....go right, then a left shortly after to the parking lot. Here is a detailed map of the state park. However, this map is now outdated in that the road from the "Y" has been rebuilt and is changed. Instead of the road turning dramatically south after the "Y", it continues straight west for about a mile until passing Baldy on the right. 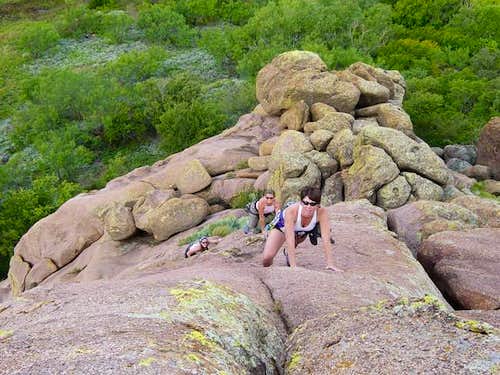 Walls: In order from west to east.

Baldy Point is located in the Quartz Mountain State Nature Park admistered by the State of Oklahoma Deparment of Tourism.. No fees are required to climb. Camping, fires, firearms, paintball guns, mountain bikes, and dirt bikes are prohibited at the climbing area. Baldy Point is a day-use area only. Climbers must be off the mountain and the parking lot by dusk.

Park Office and Visitor Center open Mon-Fri, 8:00 am - 5:00 pm. Closed noon - 1:00 pm for lunch. Remember, the park and locals refer to the climbing area as Baldy Point rather than Quartz Mountain.

Bolting is permitted but only on new routes (good luck finding one!). Established routes must have first ascender’s permission to retro-bolt. New bolts placed without permission will be removed. Normally, new bolts or anchors are done through the Wichita Mountains Climbers Coalition (WMCC).

Spring and fall are the best times. 90 percent of the climbing is on the south face of the mountain; therefore summer is almost unbearable except on cloudy days, in the very early morning, or near sunset. Winter in Oklahoma can be cold and nasty, but can also have some very mild days with temps in the 50s and 60s. In winter, check the weather conditions before visiting, because it can be 60 and sunny one day, then 20 and snowing the next.

Camping is available at the Quartz State Park campground approximately three miles away from the climbing area. They have tent sites and RV hookups. Tent sites are $7.00/night. Call for RV hookup prices. There are 100 RV sites.

Camping is not allowed at the climbing area except for two times per year. See “Events” section for more information.

Lodging/Cabins are available at the Quartz Mountain Resort.

The rock at Quartz is outstanding smooth, yet textured granite. Some have said its a little different that Yosemite, more like the rock at Joshua. Loose rock is not common; however always possible. Log on to the local climbers message board to get up-to-date information.

Twice per year, Oklahoma climbers and climbers from the surrounding states gather at Baldy Point for a reunion/party. What started as the “Fall Gathering” has now also spawned a “Spring Fling Gathering”. The Fall Gathering is usually held the first weekend of October or November and the Spring Gathering is held the first weekend in April. This is the only time of the year where camping is allowed at the climbing area. The Gatherings are a great opportunity to meet some of the “old guys” of Oklahoma climbing plus meet new climbers from all over the area. We welcome everyone to come and enjoy the climbing and comraderie.

The guidebook, “Oklahoma Select" by Tony Mayse is a must to fully enjoy Quartz Mountain and the other climbing areas of the Wichitas. It is available at Backwood gear store in Norman and Oklahoma City and also sold at the Wichita Mountains Wildlife Refuge visitor center gift shop. You can get it mail order from the gift shop by calling the manager, Fred Crosson, at (580) 429-3187, or email fcrosson@sprynet.com. You can also get the book from www.sharpendbooks.com. Unfortunately, it is not available at amazon.com. Its available at Chessler books, but Chessler takes forever to ship anything, so recommend getting it directly from Sharpend or a local gear store.

The guidebook, The Oklahoma Climber’s Guide by Chuck Lohn is an older guidebook which is out of print. A 2nd addition is rumored to be out someday. A few copies may still be available at local gear stores. Another guidebook, Southern Exposure by Duane Raleigh and Bill Thomas is also out of print and very rare. If you find any of these old guidebooks, hang on to them forever. Finally, the guidebook, Climber's Gude To The Midwest's Metamorphic Forms by Marcus Floyd has a couple of pages regarding Quartz and has a few pages of well-marked routes.